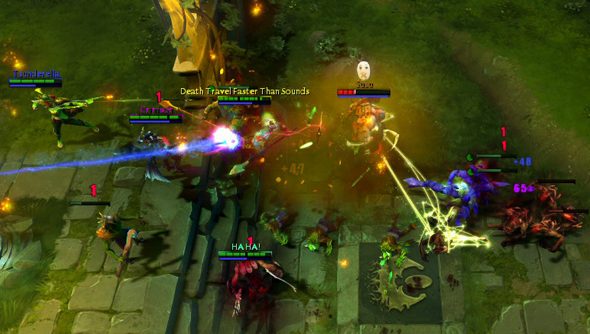 The Derp hacking group led a prolonged DDOS campaign against a pro Twitch partner yesterday, downing servers for League of Legends and Dota 2 to prevent James ‘PhantomL0rd’ Varga from streaming. The chase ended only when prank calls to the police led to Varga’s arrest on false hostage charges.

An audibly exhausted Varga told viewers on Twitch last night that he hadn’t slept in 24 hours after multiple calls to local police led to a raid on his home. Varga claimed that he had been arrested at automatic gunpoint by over a dozen policemen, but was released shortly afterwards when it became apparent the reports had been hoaxed.

Varga had been wielding a gun himself, in Quake Live, when the ordeal began several hours earlier. He had been streaming for his regular viewers when the game’s servers ceased to function, with no apparent cause – but for one Twitter user who claimed to be behind the downtime.

A correlation began to emerge as PhantomL0rd switched to other games, including League of Legends and Dota 2, and found their servers equally unresponsive.

“Every game I was playing, it was done,” said the streamer. “I couldn’t play. So I was thinking this guy could be doing it.”

Meanwhile, a thread was pumping huge numbers of curious Redditors through to PhantomL0rd’s channel, now pushed to a new peak of 140,000 viewers. Rather than give in to the hackers, Varga decided to push on for his new audience.

“I felt like I was being held hostage,” he said. “Every game I tried to play was taken down.”

As it turned out, that was the least of Varga’s hostage worries. Soon afterwards, the Twitter hacker tweeted PhantomL0rd’s real name, and added: “The police may be coming”.

Varga says he left his house, and was first alerted to the raid by the odd behaviour of a nearby pizza delivery man – who was pointing in his direction. Following the road down a hill, Varga spotted three police cars and several officers – including one leaning against a tree, aiming an automatic weapon at him.

“You could clearly see how intense this gun is,” said Varga. “I wasn’t scared. I knew what was going on. I was aware of the full situation. I was ready to explain all of this.”

Varga was ordered to turn around and raise his hands to his head, while another officer handcuffed the streamer and led him to a nearby police car (“He didn’t give a fuck what I was saying”).

Before the car reached its destination, however, Varga was uncuffed and allowed to go.

During Varga’s explanatory video, he was forced to leave his workstation to answer the door to a Domino’s driver – the sixth to be called to his house by the hacker to date.

“What can he do to me?”, a shaken PhantomL0rd said of his attacker. “He can destroy me. Honestly, if anyone decides they want to get you, they can. My information is out there. He released everything on the internet. How easy was that?”

Thanks to Venturebeat and the BBC.