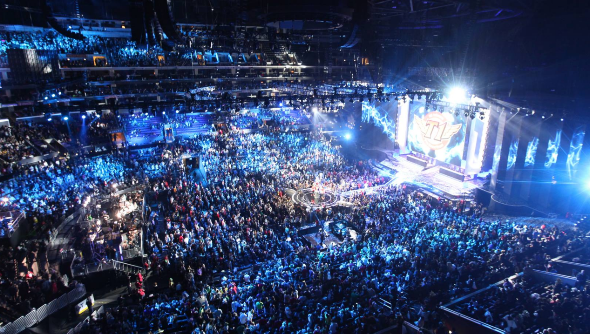 Oh jeez, here we go again. eSports have made it onto mainstream TV, being shown as a feature segment on HBO’s Real Sports show. You’d think being on a show called Real Sports that the presenters would have already deemed competitive gaming as a real sport, but no. Instead the main question was what kind of overlap was there between pro gamers and Star Trek convention attendees.

The opening feature section featuring League of Legends thankfully does present eSports as the exciting scene it is, but the follow up discussion is exactly what you’d expect. Former pro tennis player Mary Carillo exclaims “It’s still not a sport. It’s a game!” Fox News correspondent Bernard Goldberg demands to see the statistics on how many ‘cyber athletes’ go to Star Trek conventions. Sports Illustrated writer Frank Deford goes as far as to call the twenty million LoL spectators as crazy people.

Yes Frank, watching people work as a team to score points is crazy.

Hosts Bryant Gumbel and Soledad O’Brien were more enthusiastic, with O’Brien explaining the physical movements needed to pull of the strategy requiring skill, and that competitors used sports visas to travel across the world. Grumbel notes that he gets why it’s a sport.

Not everyone’s convinced then over at Real Sports, but then again I guess they don’t need to be. Whilst we always hope that mainstream coverage will be kind to games, in this case there’s no need to be too upset over the reaction. Yeah it’s not nice to be thought of as crazy and insignificant, but no one will be breaking out the torches and rallying against us for corrupting children this time.