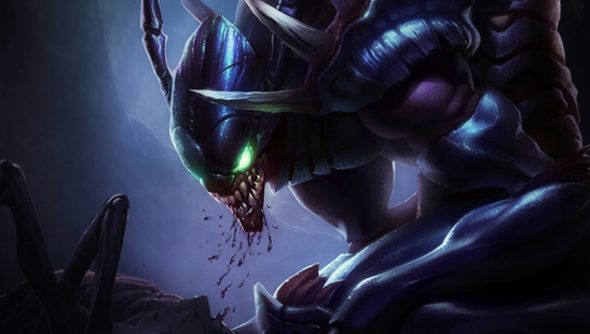 It’s always nice to see Riot mix it up when introducing a new hero, and Kha’Zix, the next addition to the roster of Champions is certainly looking to do that. After ourSyndra review, at first glance this is looking to be a much more straight-forward affair. It’s pegged as the ultimate hunter, a highly evolved Voidreaver that looks more than a little like a classic sci-fi alien who’s also pretty good at the old evolving and hunting. But, from the sounds of things, there’s more to it than that.

Because while Kha’Zix looks a bit like an alien, there aren’t a lot of walls in Summoner’s Rift, and there are less places to create a nest of mucus and excrement that you then paste victims onto so they can be impregnated by the queen. Instead, Kha’Zix ‘adapts’ to the role that’s needed. What that appears to mean is that Kha’Zix’s abilities are such that they allow you to evolve during the fight to specialise into one of LoL’s metaroles.
The example Riot have given is stealth and a melee focus, but they’ve also mentioned wings and spike racks, and there’s more than a few other avenues that Kha’Zix might be able to bulge and rupture down so that they can become exactly what the team needs, in any one game.
If it really is that drastic a shift, it’s not only going to be a really interesting Champion to come into the game, but also should make for a really interesting pick in competitive matches, as if this new Champion has no clear role, you’re giving away nothing when you pick them first during the draft stage. So, finally, we might see the meta of LoL shift around a bit, which would be extremely exciting.
As with these things, now that Kha’Zix has been teased, it should only be a matter of a week or so before we see the Champion in the game. At which point we’ll go ahead and review them, so stay tuned.