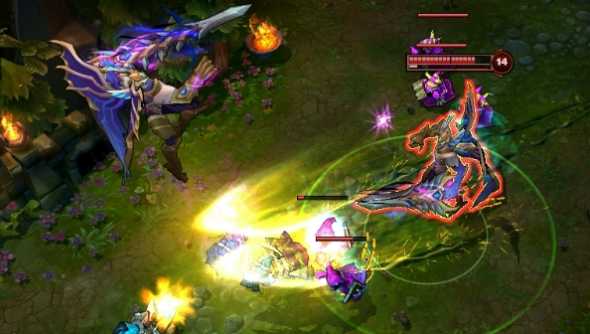 When an ancient demon of war arrives to start a never-ending bloodbath, you better start running—or at least kiting, as the case may be in League of Legends. Aatrox is a new melee bruiser champion that relies on hefty lifesteal and some light CC to murder his targets.

At his most base elements, Aatrox is a champion that wants to fight everyone all the time. Two of his abilities are built for teamfights, and the other two are built for sustainably dueling in lane.

That combination makes him ideal for a top-lane bruiser champion, allowing you to stay in the lane and push the wave, punish any aggression and escape any ganks with minimal consequences.

The core of that sustainability is his Blood Thirst ability (W), which heals him every third auto-attack. The heal amount is pretty small (20 to 40 + 25% AD), but the trick is that it heals fir triple the amount when Aatrox is below half health. That’s amazing for keeping himself in survivable health territory, especially if he’s getting bullied in the lane.

His other defining ability is his Dark Flight ability (Q), which sends him leaping to a target location, over walls, characters, and shrubberies. When he lands, he knocks up all enemies near his impact location.

Leaps, in general, are a great tool for sneaking through jungles, escaping dangerous situations, and getting the ambush on unsuspecting foes. But Aatrox’s leap takes it one step further with its AoE knock up (stun), which makes it amazing in teamfights. The first time I leaped onto the entire enemy team, and two of them died before they hit the ground (courtesy of my skilled AD carry partner), I was sold. It’s fun to use, it’s diverse in its applications, and it’s hilarious to watch people rage about it in chat afterwards. 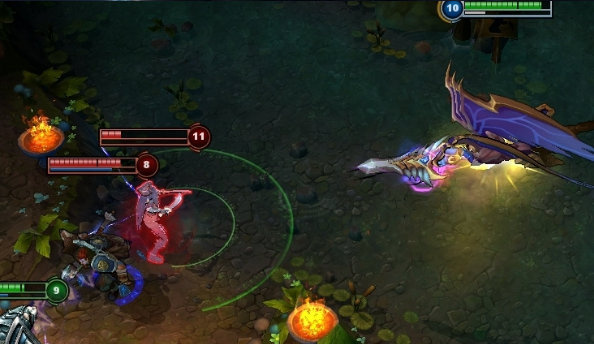 Aatrox excels in 1v1 duels, reminding me a bit of Irelia, Jax, and Olaf—right when the opponent thinks they have you cornered, you’re actually at your strongest and poised for a counterattack.

This will be especially true right after the champion releases, before players get accustomed to just how resilient this guy is. If you want to really take advantage of this aspect, you have to play him on day one.

Did the enemy bait you into a trap? It’s cool, just leap over the wall and escape. Did the enemy catch you off guard and get you below half health before the fight started? Don’t panic, just swap on Blood Thirst’s heals and use your leap to knock them up to get some free hits in.

Did the enemy just kill you? That’s not a big deal either! Just wait for your passive ability (which stores up health every time you use an ability, all of which cost health to cast) to heal you back up to half health over the course of three seconds.

One of the best parts of that passive is that you’re completely immune to all enemy actions during those three seconds. If the enemy team is hell-bent on killing you first in a teamfight, it’s essentially a free Kayle ultimate. It’s a great ultimate that not only comes in handy while trying to survive out in the world alone, but ensures survivability in teamfights. Just the fact that it exists is enough to dissuade some people from attacking you (“We’ll just have to kill him again!”), and all melee AD champions have ever wanted is to be left alone–while they murder the entire enemy team.

I’m not convinced that Aatrox is a decent AD carry–his farm is too unreliable and he’s too easily bulled away from creep kills. He’s kind of in a weird middle ground: it’s very hard to bully Aatrox out of a lane entirely, but it’s not hard to bully him out of the action. He just can’t handle the constant fire that a melee champion in the AD carry lane faces.

In the jungle, his sustain is as great as you’d think–he keeps himself alive incredibly well and can even solo dragon with minimum items. But his clear time is slow and his ganks are weak, so he’s not going to be a universally effective jungler. I think he’ll fit in great as a lane-heavy jungler, which has actually gotten fairly popular in the professional LCS league recently.

If that meta of having the jungler roam while taking a more standard pushing role in lanes gains traction, I think Aatrox could play a defining role going forward. But as it stands, he’s not going to topple the existing jungle kings. 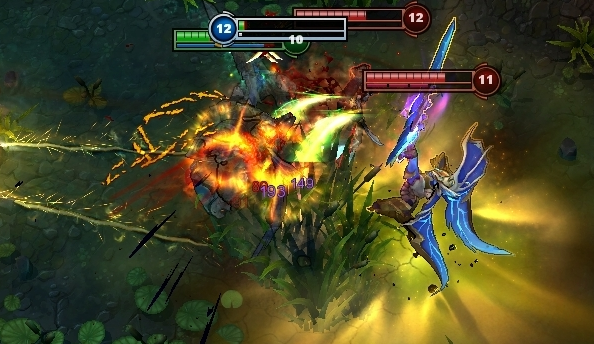 Part of my hesitation on endorsing him as a jungler is that his healing capabilities does feel just a little bit overpowered right now. I wouldn’t be surprised to see that get nerfed a bit, and then he really has very little in the way of special capabilities to offer the jungle role.

His knock up attack is strong, but it has a longer cooldown and is his only way to engage or disengage, so if he chooses to use the knock up to chase you, he’s left pretty exposed. At that point, he’s fairly easy to kite or CC–and once he’s no longer auto-attacking you, his health gain drops dramatically.

His Blades of Torment ranged attack is a decent slow, but it doesn’t last long and does terrible damage, so it was little more than a depressing swat at the enemy before dying. His ultimate ability does give him a minor boost to his attack range, but Aatrox is no Kayle and Massacre is on a long cooldown.

In one particular game, I was talked into playing mid with him after some teammates made some questionable laning choices after the match had started. It was very easy for my ranged enemy (Swain) to prevent me from getting creep kills, better known as gold in my champion’s wallet.

In that sense, Aatrox felt like a fairly easy champion to counter-pick (anything ranged with an escape tool will ruin his day), and that’ll go a long way to keeping him in check.

But if the enemy team didn’t throw a strong counter in my lane, Aatrox felt more than capable of overwhelming his opponent and steamrolling into a teamfight monster.

But, like most melee AD fighters, Aatrox is susceptible to being stunlocked and kited, with very few answers in return. That won’t always happen in random matches, but in coordinated teamplay, Aatrox was usually the first champion targeted and killed before he could power up his Blood Well and wreak havoc.

And that’s definitely a good choice, because when I was left alone in a teamfight, I absolutely tore it up. After 8 seconds, my Blood Well was charged to max and I’d already ripped apart at least one enemy champion. At that point, even if they killed me, I was coming back with a half-full health bar and plenty of lifegain potential to fill it back up to full right away.

That was easily the highlight of playing Aatrox for me: getting to that point where your items are strong and you’re fed enough that the enemy team has to spend the entire teamfight just trying to get rid of you. And, once things got really out of hand, they’d just give up and try to kill the rest of my team, leaving me free to roam. 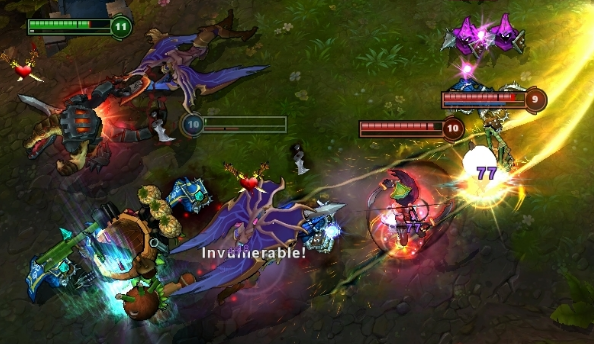 Quick, cast all your ults on me now while I can’t move!

I don’t think you need to buy Aatrox. If, like me, you’re a fan of auto-attack-dependent melee champions, like Talon, Jax, Master Yi, or Warwick, he’s worth trying when he’s available for free in a couple weeks.

But that’s a very specific taste that’s not very popular in the League of Legends meta right now, so the rest of you can skip over Aatrox if he doesn’t sound like your style. He’s fun, fairly powerful, and looks decent, but he’s missing that special element that makes the most intriguing champions so universally appealing.

If you do buy him, here are a few tips to get you started:

1. Learn to swap W: Start fights with your W ability toggled to deal extra damage, and then always swap it to self-heal when you’re about to dip below half health. That combination is brutal and is very obvious when two Aatroxes duel.

2. Knock up to help allies: Don’t just use your Dark Flight ability to engage on fleeing enemies or escape ganks; use it to knock up enemies with pesky channeled effects, like Katarina or Nunu, or to help your allies stay alive a bit longer.

3. Stay calm under pressure: Aatrox has plenty of tools to keep himself alive and turn the fight against a cocky enemy, but you have to keep a level-head to take advantage of them. Don’t panic when you get overwhelmed. Stay focused and keep it simple.