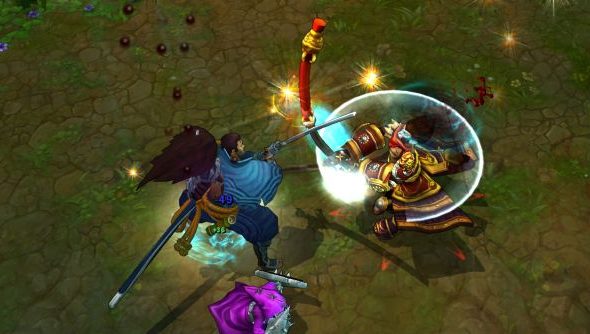 Don’t mind his emotastic title. Underneath his tear-stained mascara and sullen attitude, this aggressive swordfighter is a very interesting, unique champion that has the potential to inspire a brand new team composition theme.

If you want to see exactly how Yasuo dries his tears and cuts his enemies to pieces, look at his official profile. The TLDR version: no mana, tons of mobility, an ultimate that stuns and damages everyone around him, and a wall that blocks all projectiles.

Let’s talk about that Wind Wall for a second, because it’s an incredible leap in technology and mechanics that has not been attempted by any MOBA or ARPG before. Wind Wall is Yasuo’s W ability, and it creates a wall of wind that slowly moves forward for 4 seconds.

During that time it will block (and essentially destroy) any enemy projectiles that run into it. That includes bombs and missiles launched by abilities, auto attacks from ranged champions, and ultimates like Ashe’s Arrow. Even Sona’s Crescendo, which is only a projectile in the vaguest sense of the word is blocked.

It’s instant-cast, which means there’s no animation delay when you press the button. It appears instantly, allowing for some incredible twitch-reaction plays. I’m still only about 50/50 on blocking point-blank Ashe arrows, but I’ve blocked so many boomerangs, bullets, and spell orbs with it. And every single time I block something with that wall, I feel incredible. I feel incredible because I know they feel terrible. They’re moaning about how it’s “overpowered” and I love it.

Wind Wall isn’t his ultimate, but it feels like his defining ability, especially for coordinated team play. The potential to defend your entire team at the beginning of a big fight is a heavy burden on a nervous player’s shoulders, but in the hands of a master, it’s going to be a nuclear weapon. 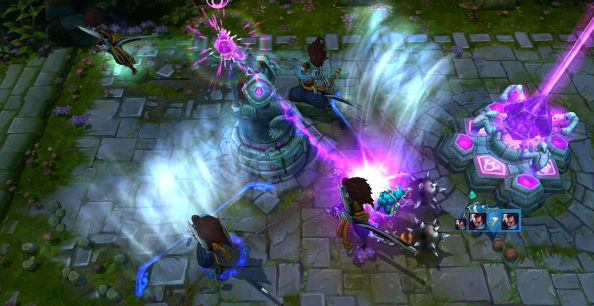 The cool thing about Yasuo is that there’s so many things competing for the role of his defining ability–and that makes him even more fun to play in almost any role. He’s a strong mid-laner, where he can survive his weak early game. He’s a solid top laner in the right comps, where he can duel effectively and farm from range when needed. His jungle is mediocre, but fun, and some have even tried him in the ADC role, although it’s hard to imagine him doing consistently well against the likes of Caitlyn and Ezreal.

His Steel Tempest ability defines the bulk of his playstyle, letting you spam the ability every 1.3 seconds at max level to deal damage and try to pull off 3-move combos to knock up all enemies in a line.

It’s a fun diversion when laning, although I did find it a little overwhelming to keep track of in a big team fight when the subtle visual cues are lost in the mess and my buff bar has 10 icons in it constantly shifting position. It’s core to his kit, though, and is part of what makes Yasuo so much fun to play for a button-spammy person like me. There’s always something fun to do, and because you aim the direction of the attack with your mouse, you’re always focused. It’s an intense playstyle that demands your full attention. 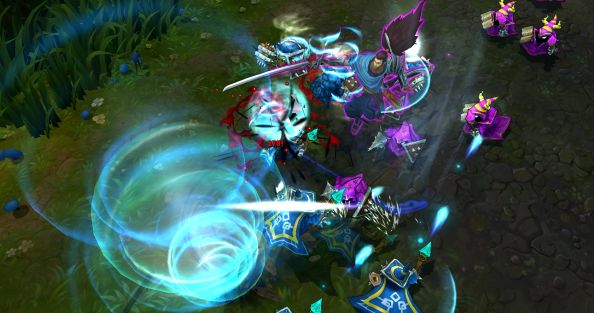 Sweeping Blade steals the show in small duels, however. It allows you to charge through an enemy unit (minion or champion) every 0.1 seconds. Yes, that is ridiculous. The catch is that you can only charge through each individual unit every 6 seconds. But when you’re battling someone in a lane surrounded by their minions, you literally never stop moving. God help them if they’re trying to land a skillshot.

I also love that Sweeping Blade sends you past your target, not directly to them. That forces you to choose your targets carefully and predict the direction your opponents will run. It’s not a huge change, but it gives you another tactical element to think about during the fight.

The real show-stealer for Yasuo is, rightfully, his ultimate. Last Breath teleports him to an enemy airborne unit, and traps it and all nearby airborne units in the air for an additional second while he beats the crap out of all of them. When he lands, he gets a big armor-penetration buff for 15 seconds. Which is, again, insane considering the cooldown on the ultimate is 30 seconds.

It’s very tempting to call the ultimate overpowered, and in its current state, it absolutely is–when you’re on a coordinated team with people playing champions with AoE knock-ups like Cho’Gath or Nami, who can set up the perfect ult shot for Yasuo.

But in the majority of fights, I actually found the ultimate to be frustrating. Without someone else to knock-up the opponent, Yasuo has to cast Steel Tempest three times to reach the end combo that lets him knock-up enemies. That takes roughly 6 seconds–an eternity in any sort of mid to late game fight.

In most situations, I simply found myself dead before I could use my ultimate, and left feeling like I hadn’t contributed much to my team or never stood a chance at victory in my duel. When I am able to get the ultimate off on an enemy in a duel, I almost always won. But you’re really at their mercy for those first 6 seconds.

It’s a frustrating balancing act.Yasuo is so powerful if he gets his ultimate off that the dev team felt they had to make it annoyingly difficult to pull off. It might get changed in the future (yay for patches!), but as it is, it’s a very aggressive boom or bust playstyle.

If you consider yourself a competitive player who regularly plays on coordinate teams, you have to pick up Yasuo. The potential to build a team focused on knock-ups and blocking enemy attacks should be extremely compelling to anyone that loves twitch gameplay. Yasuo is the heart-and-soul of that team comp, and will easily satisfy the twitcher’s need for a champion that gives them plenty of mechanics to master and constant opportunities to make split-second maneuvers that make or break an entire team fight.

I expect Yasuo to receive some major balance adjustments before the devs are happy with him, though. If you’re sitting on the fence about whether or not you want to buy him, stay there. Wait a month or two and see what his kit looks like then.

If you do buy Yasuo, here are a few tips to get you started:

1. Always move: His resource is Flow, which charges from moving, and provides a damage shield when it maxes out.

2. Don’t initiate with your dash: Unless there’s something else to dash to nearby, save your dash for sealing the deal when they try to run. I lost a lot of escapees early on.

3. Enable Smart Cast on Wind Wall and Last Breath: Both of these abilities rely on your ability to take advantage of very short opportunities. Using smart cast will allow you to pull the trigger on those abilities a half-second quicker.