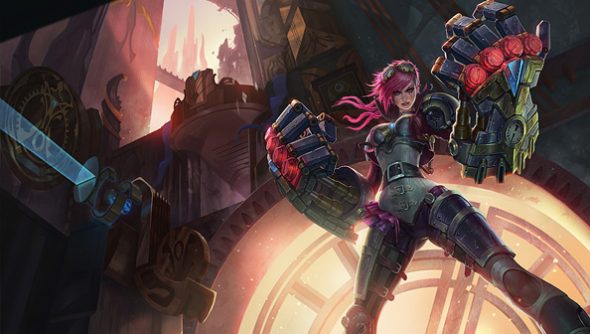 We looked in on Piltover Enforcer Vi just over a week ago, when the tea-wielding so-and-so was pottering around on LoL’s test server. Then, we had scarcely enough time to offer an approving nod; now, we get to see five-and-a-half minutes of other champions being punched in the face, maw or beak. There’s plenty of advice on doing it yourself, too.

So: the abilities. Vault Breaker is an attack which carries Vi forward after it’s charged. As she’s charging, Vi’s movement is slowed and the potential damage and range of her attack gradually increases. Riot’s Phreak recommends taking an early point in Vault Breaker and maxing it by level 13 for its “great damage output and mobility”.

Excessive Force turns Vi’s basic attack into an increased-damage charge punch, hitting both the target and enemies behind it in a cone. Two Forces can be stored at once, to be used one after the other.

“I recommend taking Excessive Force at level one when laning and always maxing it by level nine to store charges more quickly,” says Phreak.

More punching comes in the form of Assault and Battery, Vi’s ultimate. Assault and Battery sees her dash towards an enemy champion, knocking them into the air and suppressing them for 1.25 seconds. She becomes immune to crowd control and topples any enemies along the path to her victim, dealing 200 damage when she gets there. It’s glorious to watch – try 1:43 in the Spotlight video below.

Her passives are Blast Shield and Denting Blows. The first activates a shield worth 10% of her max health for five seconds for every ability-based hit she lands, contingent on a 12 second cooldown. The second has every third attack deal extra damage, as well as grant 30% increased attack speed for four seconds and temporarily reduce the target’s armour. Phreak suggests maxing it last unless you’re jungling, in which case you’ll want to invest early.

“With her high mobility, damage and initiation, Vi is great at leading the charge in battle or mopping up fights at the end,” says Phreak.

Who knew punching people could be this much fun?