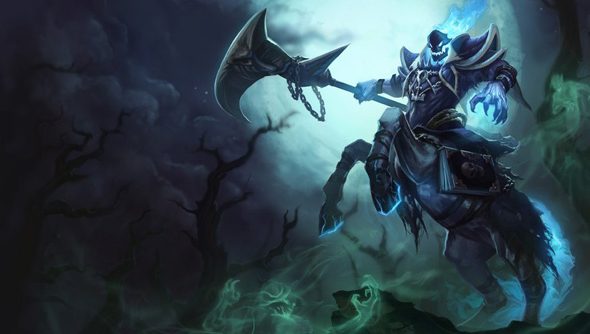 The Gank is the greatest joy in League of Legends. Of having your lane pushed back, looking like it’s all but lost, and having another member of your team come swooping in to turn what looked like a defensive last stand into an outright murder. It’s why jungling is such fun, and why Hecarim could well be my favourite new hero of the past few months. It’s all about his speed.

Somewhere between Jacob Marley and Chiron, Hecarim has a suite of skills that are all about getting around as fast as possible. That’s a great advantage to have in a Jungler, but even more powerful when you think about the late game, and covering lanes from one end of the map to another. A good half of his skills are about getting from A to B faster, and his passive, Warpath, gives him extra attack damage proportional to his movement speed. That’s not to mention that he already has a pretty beefy starting stat in it, clocking in at 346.

On your Q you have Rampage, a giant cleave that becomes more powerful based on your AD, but also has the handy proc of reducing its own cooldown for a set amount of time after each swipe. It’s going to be your main damage dealer, and your most essential jungling skill, so it’s best if you max it first.Your W is Spirit of Dread, a sizable AoE that not only does sustained damage to anyone caught in the radius, but also heals you a set amount, so long as you do that much damage. It keeps you going in your jungle, and also mops up anyone delusional enough to think they can get away from you. Second only to your Q, you should max this second.

Devastating Charge, resting on your E key, is a rapidly increasing movement speed bonus that increases over time, with the added kicker that if you attack anyone while it’s active you’ll leap at them, knocking them back away from you. Even though it’s by far your most useful skill, it’s still as useful at level one as at level four, so just leave it until you’ve maxed out everything else.

Finally, your R, Onslaught of Shadows, is a skillshot ultimate that fires you, through terrain and over walls, along a wide set path, fearing and knocking back anyone that you hit with it. If you can position yourself well, you can devastate an entire enemy team, and as it’s on a relatively short cooldown, you can even just use it as a chaser, getting that nuke that almost escaped from you.

With this combination of skills, Hecarim becomes a champion all about initiation, ganking with his E and mopping up with a combo of his W and Q. In some occasions it’s almost best to hang back, waiting until your teammate has made the first move and the opponent thinks they’re on a winning move, only for you to come galloping in and knocking them right into your tower. Hecarim, in many ways, is even more frustrating to play against than Alistar.

All of this speed and CC does come at a price, though, and that price comes in the form of the glass cannon that Hecarim often finds himself in. Using this guide, you can only really start to feel your anxiety and stress abate once you have Trinity Force, and even then you’re not exactly Garen. If he gets focused down, and a good team willfocus him down, he’s going to get slaughtered for meat.

There’s also the problem that the passive almost feels constrictive. Because you get such a boost to your AD from movement speed, it seems mad notto buy items like Trinity Force and Force of Nature. While they’re both brilliant items in their own right, it does mean that Hecarim, at times, feels restricted in his versatility, forced to buy items that make him viable, rather than reacting to the way that the enemy team is building. The saving grace is that he relies so heavily on ganking and flying through the bushes with his ultimate that he’s rarely the focus of attention until it’s too late.

Providing, that is, your team actually know what they’re doing and can capitalise on your moves.

Which is the fate of the Jungler, and always will be. More than any other role on the battlefield, they rely on team communication, and team mates using the gaps and opportunities they create to capitalise and push forward. Hecarim, more than most Junglers, needs a good team to sustain him, and give him the gold he needs from support kills and lane domination. If he gets stifled and his gold stream falters, you may as well take him out back and put a gun to his horsey face.

All that said, his mobility makes him a great deal of fun to play, even if you’re not getting the huge amount of kills and excellent tactical play that ideally would be every game. Quite often he can gank all by himself, or with only limited support from his team, and so long as you have the element of surprise, he’s a joy. He dominates mid-game, after a weaker start and then a tail off in the late, but that’s the Jungler’s lot.