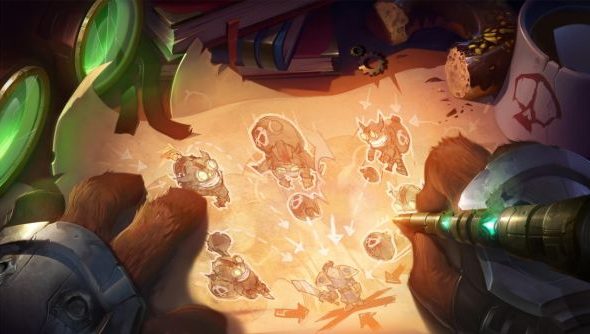 It’s not so hard to encapsulate the appeal of League of Legends’ new One for All mode – it’s duplicate champions, in one arena, finally given the official okay. It’s Riot, throwing up their carefully curated game balance in a controlled environment.

Its consequences for the game’s intricate metagame, however, will take a little longer for its dedicated players to catalogue. And they’d better be quick about it. They’ve only got a couple of weeks before the next in Riot’s new cycle of off-kilter modes throws the MOBA into (optional, good fun) disarray.

“If you’ve ever dreamed of nuking an enemy team with five Final Sparks, chaining together a series of Unstoppable Forces or living forever with back-to-back Chronoshifts,” write Riot, “now’s your chance.”

One for All is already available in the LoL client, and will remain there til December 12. It’s not the first time it’s popped up in-game – for a short while last month, LoL community dataminers had a version of the mode up and running that prompted Riot to step in.

It transpired that the developers have had a team working on original, experimental modes for the past few months. One for All is the first – but these “short-lived” modes will be cycled regularly, like Left 4 Dead 2’s mutations in slow-motion.

“Cycling new modes will let us work with you guys to create new experiences that would have been difficult to do as permanent game features, and it gives us free reign to go mildly crazy,” said Riot technical game designer Richard ‘Brackhar’ Hough at the time. “Also, cycling new modes in and out will allow us to keep these things fresh and focused from a gameplay perspective.”

Riot are keen to conduct a “very open development process” for the cycle, so be sure to leave feedback on One for All on their forums, where they’re always watching. Are duplicate champions something you’d like to see become a permanent fixture?