A former Team MRN player has warned rising League of Legends pros about the risks involved in choosing a manager. LCS veteran Patrick ‘MegaZero’ Glinsman told LoL Redditors that managers have “a tremendous amount of power” under the current Championship Series system, and suggested that careers could be “totally ruined” by financial disputes like those the disbanded Team MRN have struggled with.

Glinsman believes that key decisions should be subject to a majority team vote, but said that the reality of professional eSports is far less democratic.

“The manager controls who receives how much money, all roster swaps, and he pretty much owns the team and can sell it to anyone he deems necessary,” he wrote. “In my case, our manager decided to pay himself over 3x that of our highest paid player.”

LCS organisers and LoL developers Riot have mobilised to help the now defunct team, and Glinsman said he is aware of “some contractual rules” designed to support players – but the former members of Team MRN have yet to receive any of the money they believe they are owed.

Riot’s LCS Season 3 rules list a required Minimum Player Compensation of $12,500, and insist that “nothing in these Rules is intended in any way to limit the compensation a team pays to its players”.

“I do take full responsibility for letting this situation happen,” Glinsman went on. “It was all just very unfortunate because at the time, my team trusted our manager a lot and it was really hurting our team by constantly arguing about managerial responsibilities so I dropped the matter after a week or two.” 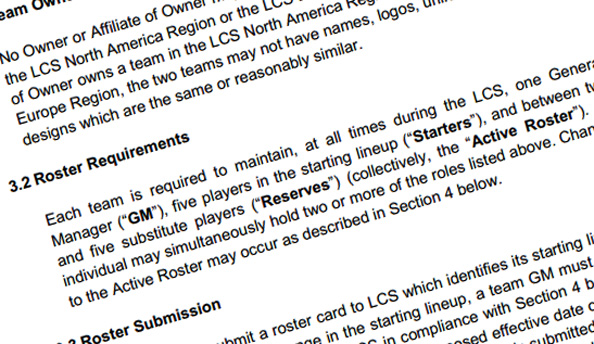 Glinsman condemned the extent of managerial control as a “major flaw in eSports” which sees young players punished for their naivety.

“They don’t take managers seriously and usually just hire a friend or a popular player,” he explained. “I’m not saying every team does this, but because the manager role isn’t like a real sport yet, you put these young players in a situation where their career can be totally ruined just because there’s someone that controls their fate.”

“For me and mega especially who gave up a lot of our lives, like our college tuition and such, to come to LCS to pursue this dream,” he said, “it really was sad that this situation was the reality for our team.”

Glinsman now plays under compLexity’s banner, and is full of praise for their manager, Phranq. “I’ve never felt closer to a manager and he really loves his team and what he does,” he gushed. “You da best Phranq.”

Team MRN manager Martin ‘Marn’ Phan, meanwhile, has promised to post a comprehensive response on his blog. “So dumb,” he tweeted. “I have been in contact with Riot about this the whole time. There’s always 2 sides.

“I’m at a tournament. But please hear my side before coming to conclusions. I have done shady shit in the past but this is NOT one of them.”

“I would much rather you hear both sides of the story than follow my words as I could be very biased,” agreed Glinsman. “People should always be able to defend themselves.”