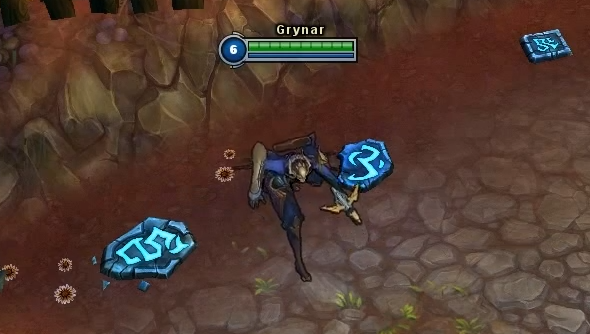 The newest League of Legends champion is available to play now for those of you lucky enough to be members of the Public Beta Environment. Quinn is a ranged carry and her hawk Valor (without the U) brings death from above. Quinns is almost two champions in one, as taking control of her also gives you a chance to take control of Valor.

Click through for a breakdown of Quinn’s abilities, plus a video of her trying them out.

Unfortunately, you may well be aware that the public beta isn’t currently accepting new signups but that doesn’t mean you can’t see Quinn in action.

The powers she’s using are:

Harrier: This is a passive ability that has Valor periodically tags enemies as Vulnerable, meaning that Quinn’s first strike on them will deal additional damage. Enemies remain Vulnerabe for 4.5 seconds and, if struck, suffer 25 + 10 damage per level that Quinn is. Valor will either tag Quinn’s most recent target or any enemies nearby with low health, picking champions before minions. Once used, this power has a ten second cooldown.

Tag Team: This allows Valor to take Quinn’s place on the battlefield for 20 seconds. Valor moves 80% faster, though this is reduced to 20% when in combat. Many of the following abilities behave differently depending upon whether Valor or Quinn are active at the time. When the 20 seconds are up, Skystrike (below) is immediately cast, unless the player chooses to cast it sooner. Note that Harrier doesn’t function while Tag Team is active.

Skystrike: Quinn returns to the battlefield amongst a rain of crossbow bolts, dealing damage to enemies around her in proportion to how much health they’re missing. The minimum values for this are 130, 185, or 240, while the maximum are 260, 370, or 480.

Blinding Assault: If Quinn is active, Valor flies in a straight line until striking an enemy, after which he blinds them for 1.5 seconds and deals 70, 11, 150, 190 or 230 damage. Otherwise, Valor deals the same amount of damage to enemies as an area of effect attack. The cooldown for this power is short, being either 11, 10, 9, 8 or 7 seconds.

Vault: If either Quinn or Valor are active, this causes them to rush towards an opponent and inflict 40, 70, 100, 130, or 160 damage, as well as slow the target by 70%. In Quinn’s case, she also leaps back away from her target, to the limit of her attack range, and Valor will then mark that target as Vulnerable.

She already has an entry here on the League of Legends wiki. It’s worth noting that Quinn’s range is pretty short, being just 525, though her base attack speed is a fairly nippy 0.665 and goes at least a little way to making up for this.