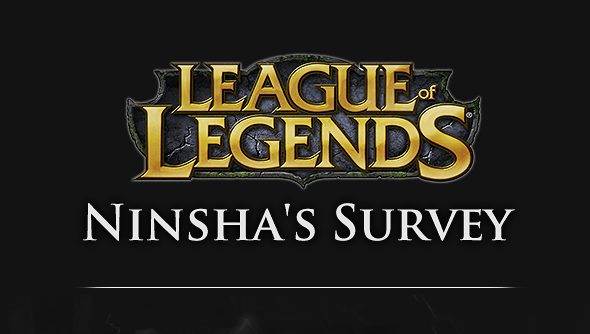 The whole survey can be found herein a quick and dirty Google Spreadsheet, or hereif you’d rather a considerably more sexy infographic.
According to the survey, a whopping 51% of LoL players are between 19 and 25. In addition to that, 42% are younger, and only 7% have managed to make it into their 26th year. While this seems like a massively drastic age imbalance, it’s also worth noting that this is a survey that was posted on Reddit, and the majority of those filling this out would be Reddit users. It makes sense, when you think about it like that, that most of those would be in the sub-25 age range. Regardless, it’s still an impressive statistic, and perhaps says something about the lightning fast and complex nature of the game.

Next it moves onto game modes, and unsurprisingly The Twisted Treeline, the new map that Riot brought out for 3v3 games, is hugely unpopular, with less than 1% of users preferring to play it. More interestingly Dominion doesn’t really fare all that much better, with only 227 of those taking the survey saying they preferred to play it. It’s telling that even Valve are sticking to the classic three-lane setup with DOTA 2, and not trying to rock the boat at all. Maybe MOBAs are condemned to that single map forever.
There’s a temptation to start to muse at the psychology behind some of these answers, and none more so when looking at what people consider themselves best at, when looking at lane allocation. Top just ekes out in the lead, 1% ahead of mid, and it would make sense that there, where things are slightly less stressful, and you don’t have the desperate duelling of the mid nukes to deal with, you can play more confidently.

More surprising is that both Jungle and Support are on equal footing, both coming in with 34% of the vote. Jungle I can understand, as it has the largest demand on player agency, requiring you to know when to gank, when to hold back, and when to cover a lane. But Support seems a little less fraught with the potential for failure, as you just need to cover the Carry. Then again, that’s probably the difference between a good support and a great one.

Moving into the champions themselves, the mildly frustrating nature of the survey starts to rear its head. Because Ahri was the default choice, she’s come out on top of each of the questions, meaning she’s simultaneously the champion that people think they’re best with, worst with, and love to play even though they’re not good with her. Skewed stats aside, the highlighting of Graves as both someone people play well with and don’t find it fun to play as is an interesting one, as he’s a prevalent champion, albeit one that never quite seems to dominate, at least in the games I play. On paper, too, he should be a blast to play, with his constant dashing and up-close-and-personal playstyle. It could easily be a case of /too/ much cohesion in his abilities, though; their purpose is so very clear in relation to one another that there isn’t a lot of choice on the part of the player. You just do what works, every time.
By far the most attention grabbing stat of the champion questions is that, when asked about who needs a buff, there’s a huge surge in the stats concerning Evelynn. Bear in mind there are over 90 champions in LoL at the moment, and for one to get 34% of the vote means there must be something seriously wrong. I’ll admit I’ve only seen her even used in one or two games, but when you’ve got such a strong stealth champion in Twitch, she does seem a little lacking in personality.

It’s a stat that gets even more impressive when it pops up again, when players are asked who needs a complete overhaul. Instead of just 34%, the number jumps up to 50%. This means that, far from just needing a buff, half of the people taking the survey thinks that she needs to be wholesale reworked. That’s pretty damning of the champion, and something that Riot really needs to take note of.

The survey then heads into a series of ratings, covering the pricing models, and the quality of both the rate of champions being released, and the quality of the skins they come with. As you might expect, players were generally impressed with the speed with which they got new champions, and the service in general, and were less pleased that they had to pay money for them. So it goes.
For me, the most interesting aspect of the whole survey is the comments about the metagame at the very bottom. The resounding cry is that it’s too formulaic, and far too rigid in its structure. Especially bottom lane gets a kicking, with cries that it is both far too boring, and far too similar game on game. It’s something that makes the oncoming shadow of DOTA 2 on the horizon even more of a threat, as it’s a game that is focused heavily on emergent, fluid play, rather than the more consistent metagame of LoL.

The survey points out some interesting flaws in Riot’s behemoth, while highlighting lots of the strengths that have turned it into the massive game that it is. And to reinforce quite how massive it is; the 18,000 people who took this survey represent less than 0.06% of the LoL community. This is a miniscule proportion of the people who play the game, and yet it’s a large enough slice to get those core issues out there. It’s going to be interesting to see what Riot do with this information.