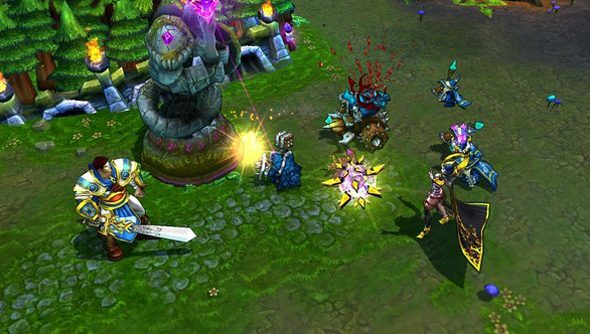 Here’s a fun fact: the nastiest 1% of League of Legends players are responsible for only 5% of reported negative experiences. Who’s ruining everyone’s evening the other 95% of the time, then? Paradoxically, it’s all the nice people: the 78% who regularly receive honor and are barely if ever reported.

It’s Riot player behaviour specialist Jeffrey Lin’s job is to track toxic chat of League of Legends players and work out how to stop it from happening. That starts, he says, with creating a context that makes it easier to for the “inherently good” majority to play nice than to start “flipping tables”.

“Our goal is to make sportsmanship the path of least resistance,” said Lin. And that’s what Team Builder is all about.

Riot plan to make sportsmanship “the path of least resistance” by recasting LoL’s pregame as a more positive experience. Lin and his team have found that, if pregame communications were negative, a game typically concluded with 15% more reports – regardless of who won.

And while 3% of LoL players feel strongly about getting into the game quickly, 50% would prefer to take the time to ensure they have sportsmanlike teammates.

The recently rolled-out Team Builder is a key weapon in Riot’s fight against toxicity, then. Time pressure hurts negotiation – and by letting players choose their champion and spells in advance, Riot allow them time to think about their composition as a team.

The results have been pretty conclusive: teams using Team Builder have benefitted from a 4% increase in positive comms during a match. If they won, they’ve enjoyed a 23% drop in negative comms; if they lost, the drop was even more significant: 36%.

“You establish one core identity for the team, odds are high they’ll conform to that identity,” said the behaviour specialist. “They’ll follow that team lead.”

Have you noticed the same in your own Team Builder-enabled exploits? Let us know in the comments.