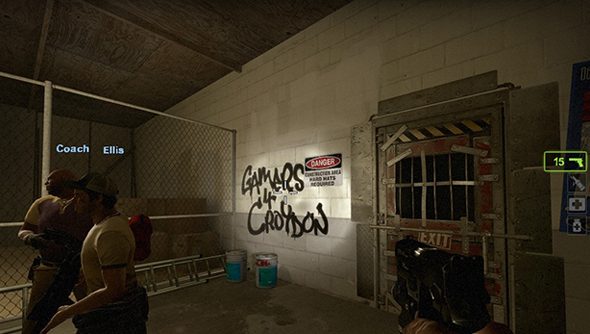 Next week, a full-blooded version of Left 4 Dead 2 will be released in Australia. It’ll be released under the country’s R18+ rating – the very adult classification for videogames it didn’t have until last year.

Gabe Newell and Valve have implemented a new in-game safehouse message – as thanks to the political activists who stood up to the South Australian attorney general and helped ensure R18+ happened.

Australian law requires all Attorneys-General in the country to consent to changes in classification guidelines – a peculiar situation that left one man, the South Australian attorney general Michael Atkinson, stubbornly standing against the tide of adults requesting the choice to buy and play violent games.

In a letter to a frustrated citizen, Atkinson claimed that games weren’t important to voters – and that if gamers wanted to prove him wrong, they should run against him in his own electorate.

Which is exactly what Kat Nicholson, David Doe and Chris Prior did – despite Doe’s location 738 km away from Atkinson’s Croydon constituency. Doe and Prior registered Gamers 4 Croydon as a political party, and Nicholson campaigned for an R18+ rating as the party’s candidate in Croydon.

Nicholson eventually won 3.7% of the votes of Croydon’s electorate, and two days later Atkinson resigned as attorney general. He cited personal reasons, but told Kotaku AU that he “knew Gamers 4 Croydon would win in the end”.

On March 7 last year, Ninja Gaiden Sigma 2 Plus became the first R18+ game – and Left 4 Dead 2 is one of the latest. The game was famously bloodless under its previous Australian classification, and Gabe Newell has thanked Nicholson, Doe and Prior for helping to restore the game to its proper state.

“We really appreciate your work for the Australian gaming community,” wrote Gabe. “Pretty impressive what you were able to accomplish. Please see the attached image. This will be going into the game next week.”

Will any of you lot be downloading the uncencored Left 4 Dead 2 as DLC? It’s a dead-clubbing classic.