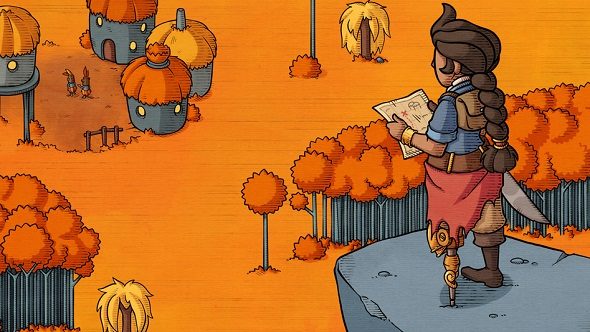 Starry-eyed astronauts should check out our list of the PC’s best space games.

Before you blast off into space inside a giant artillery shell, wannabe cosmic explorers will have to choose between five playable characters. These range from the bumbling janitor Betrand, to the feared air pirate Rose, to even Betrand’s gun-toting grandma Monique. Certain planetary excursions will require you to pick a specific character to get the job done, so it pays to learn the strengths and weaknesses of each cosmonaut.

Not all adventures will go as planned and you may end up becoming a snack for some scary alien predator. Do not worry, as the Academy of Spatial Sciences has recently mastered cloning, meaning there is always someone on hand to continue an expedition.

While characters like Rose and Monique are certainly geared for combat, violence will not always be the answer. As seen in the trailer above, the best way to move that alien crab blocking your path may be to dance for it. Daring Discoverers is clearly trying to be as tongue-in-cheek as the comics that inspired it, so be prepared for some wacky escapades when exploring alien worlds.

Daring Discoverers’ art style is certainly striking, with its bright colours and bold character designs making it look like a lost comic by someone like Hergé or Uderzo. It’s also keen to reference old French cinema, with space travel via giant cannon being a reference to the Méliès short film, A Trip to the Moon.

Triskell Interactive have not announced a solid release date, but it is expected to come to Steam and other platforms sometime in May.