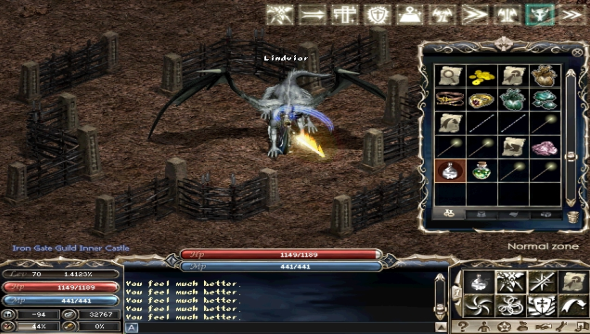 Lineage isn’t an MMO you hear much about anymore – I’d assumed it had died off years ago – but it’s just now celebrating its 15th anniversary. Not only that, NCSoft have revealed that the aged MMO has made $1.8 billion since it launched.

The game’s North American servers were shut down in 2011 but NCSoft kept the game alive in Japan and Korea, where the bulk of the game’s subscribers reside.

The news of Lineage’s $1.8 billion comes from this press release. It’s not worth following that link if you can’t read Korean. Still, my friend Google can and it says this:

“NCsoft (NYSE gimtaekjin) of ‘Lineage (Lineage)’ is the 27th Pan-gyo R & D centers in the formal service of the 15th anniversary commemoration of the press conference, open, single-game initial sale 2 trillion won to break said. domestic online game companies to newly written down from Lineage 1998, the first service to start one million members in 15 months after opening the era of online games in 2007 sales of 1 trillion won a single game is written, be the first. Greenwich ratio is 99.5 per cent of adult users. Confirmed by the age distribution of active users 30 42.5% 20 26.8% 40 17.7% was accounted for. With 30 or more users, especially their economic power, 72.6%, accounting for less than 1% of teens did not.”

I think what it’s saying is that the game has made 2 trillion South Korean Won which converts to $1.8 billion (at least, that’s what Kotaku are reporting). Also that Lineage found more than one million subscribers in the 15 months following its launch. I can make little sense of the rest. Maybe the post’s pie charts will help: 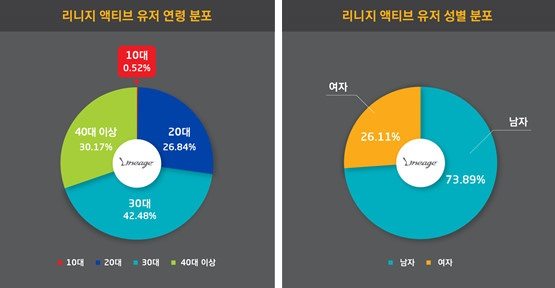 “Through the late 1990s, the domestic online game Lineage facing constant attention and affection of generations to play Lineage and can not be seen in any existing game with high royalties that secures the user layer NCsoft said. Greenwich for the past 15 years has grown with our customers, from 30 to 40 workers took their place to enjoy one of the leisure culture.”

“See how much busy in hobbies and leisure workers who do not live sperm month (29,700 won) the price is certainly attractive.”

“15 years does not change the price, ie the price of pizza per month bout semyida enjoying Lineage.lineage can be played only with a simple mouse operation, and a variety of community not as good as the game is present inside the SNS.”

Google, your translator is useless. What is a sperm month? Is pizza per month a good conversion rate? What is the Greenwich Ratio? All this and more will remain unanswered.

Still, well done Lineage you’ve achieved something. We just can’t be sure what.