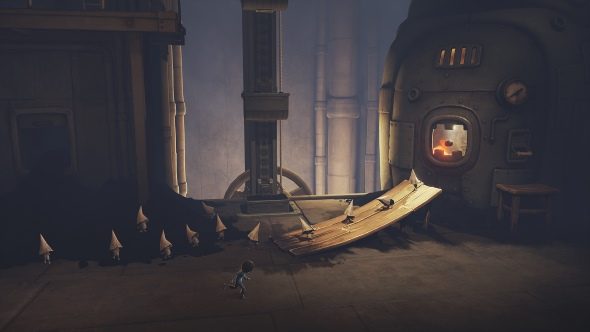 Little Nightmares was a chilling little bit of brilliance, and one of the more overlooked titles of early 2017. While comparisons to Limbo are hard to get away with, Little Nightmares distinguished itself with its simultaneously unreal and horrifically solid-feeling world of twisted, warped, hungry giants.

The only real complaint to be levelled at the game was its relative brevity, something that the season pass has been attempting to rectify somewhat. While the first DLC – the depths – felt like a bite-sized morsel of new content, the newly launched second chapter – The Hideaway – might be just what you’re looking for.

Stealth in Little Nightmares tends to be of the panicked, dashing-for-cover variety. Maybe your sneaking skills could be improved elsewhere?

The second DLC chapter of Little Nightmares, The Hideaway, puts you in the shoes (well, bare feet, nevermind) of The Runaway Kid, a secondary protagonist working his way through the horrible world of The Maw, constantly evading the grabbing, hungry hands of the Guests. This time, the story is significantly more focused on the skittish and mysterious Nomes and the parts of the complex that they inhabit.

The Nomes do seem to be part of the ecosystem (if you can call it that) rather than just stowaway creatures. They ferry coal into great steam furnaces, and this chapter promises that they guard a secret that might just be of use. Now, how all of this ties into the chilling ending of the main game? Well, I think we might just have to wait for the third (and possibly final) DLC, due sometime in January.

Little Nightmares: The Hideaway is available now on Steam, GOG, Humble and more by itself, or as part of the Secrets Of The New season pass.