Dragon’s Crown notwithstanding, 2D brawlers don’t tend to dabble in witchcraft very often. Here comes Little Witch Academia: Chamber of Time, then, hoping to offer something other than the genre’s usual gritty urban standoffs. It has its cast of trainee witches throwing both fists and spells in their quest to break out of a mysterious temporal loop.

While Little Witch Academia is based on the anime of the same name by Studio Trigger – marketed as Japan’s hyperactive answer to Harry Potter – it tells a brand new story that takes place between the first and second season of the Netflix show.

The game kicks off as protagonist Akko Kagari and pals are heading off for their summer holidays. They are interrupted by the opening of an ancient chamber in their school’s basement, natch, which locks them in a Groundhog Day scenario, forcing them to relive the final day of school over and over again. We remember feeling exactly the same as schoolchildren when the tantalising prospect of summer holidays drew so close. Anyway, with no escape in sight, Akko and friends must delve into this chamber and break the curse. Only then can they can finally get their six-week break. 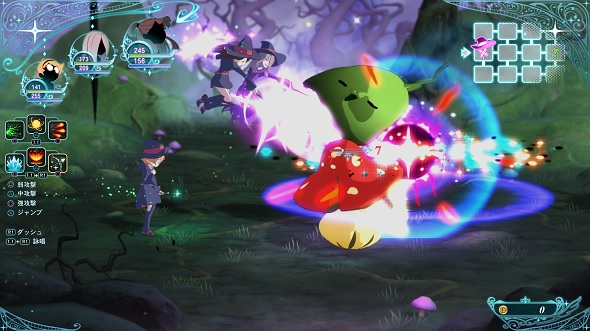 The current playable build focuses on fighting through the Chamber’s dungeons, but the full game will have you talking to fellow classmates while exploring Luna Nova Academy. What you do outside the dungeons will aid you inside them, where the game plays similarly to Dragon’s Crown – in that it focuses on action with RPG systems in the background, fighting across as well as up and down the screen, and with hidden rooms and treasure chests to find along the way. Once you have beaten and blasted your way through the minions, the demo concludes the dungeon with a boss fight, but other sorties may have you rescuing someone or hunting down a specific item instead.

In combat, Akko has access to light, medium, and heavy attacks, along with five different spells and a cinematic super move, which sees her firing a giant magic arrow to clear the screen. You can choose two of Akko’s friends to follow her into battle, with each of them having their own array of spells and normal attacks. Akko’s movement options are quite extensive too, as she has access to a double jump and a dash, allowing her to dodge incoming attacks easily. 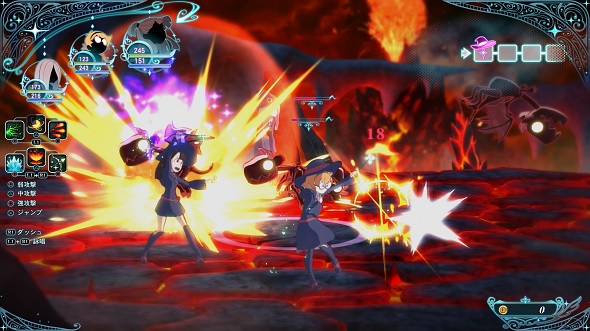 While all this sounds like it makes for an engaging battle system, a problem emerges in that, being spell-casting witches, Akko and her pals are not trained for close-quarters combat. Whereas in most beat-‘em-ups, you are playing as street brawlers or sword fighters who specialise in toe-to-toe scuffles, Little Witch Academia prefers ranged projectiles and long start-up spells that do not work in tight corridors against hordes of enemies.

When fighting against the big-bodied boss of the current demo, Akko’s screen-filling spells feel impactful, but they are much less apt against the lesser monsters. The upshot is that you feel a little toomuch like a witch in training. Unless you can switch Akko out for a melee-oriented character, combat in Chamber of Time will become stale pretty quickly.

If you are a Little Witch Academia fan, you might well enjoy jumping back into its world when the game arrives on PC in early 2018. But, from what we have seen, it is difficult to imagine 2D brawler fans being bewitched by Chamber of Time.

{"schema":{"page":{"content":{"headline":"Little Witch Academia: Chamber of Time might not be the 2D brawler the anime deserves","type":"news","category":"little-witch-academia-chamber-of-time"},"user":{"loginstatus":false},"game":{"publisher":"BANDAI NAMCO Entertainment","genre":null,"title":"Little Witch Academia: Chamber of Time","genres":null}}}}