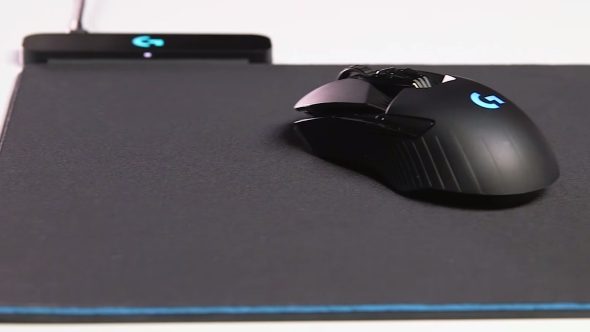 Logitech have announced the G903 and G703, two wireless gaming mice that charge through the mouse mat and don’t even suffer from input lag. Good riddance, cables!

We’ll be looking to try these bad boys out soon, but before we do make sure you catch up with our picks of the best gaming mice available today.

Wireless gaming mice, in theory, are a great idea. No wire to tangle up with the cabling and detritus on your desk, and your cat is a lot less likely to use it as a fancy chew toy. So why stick with a cable?

The reasons everyone hasn’t jumped ship from wired mice yet are practical ones. While modern-day wireless mice are a lot sharper in terms of response, they’re still shaking their reputation for lagging behind when transferring those all-important button presses into games. And as with all wireless tech, they need to get their power somehow. This means gamers can be stuck charging their mouse with the very cables they’d hoped to avoid.

Luckily, several manufacturers have been looking to address this problem. Similar to Corsair’s Concept Zeus, Logitech’s ‘Powerplay’ charges the mouse by creating an ‘energy field’ above a powered mouse mat that the mouse soaks up. This means the mouse can be charging wirelessly even during gameplay, which means no more downtime from all that shooting you’re going to be doing in Destiny 2.

What’s more, this doesn’t interfere with their ‘Lightspeed’ wireless tech, which has a one-millisecond report rate – that’s the same as our current favourite gaming mouse (and the G903’s predecessor), the Logitech G900 Chaos Spectrum. Their 12,000 max DPI and PMW33GG optical sensor means they’re also holding their own as far as sensitivity is concerned.

The only downside? The mice and Powerplay mat are sold separately, and it ain’t cheap. If you’re opting for the G703 the set will cost you $200, while pairing the G903 with the mat will be $250. Ouch.

Despite the restrictive price, those with money to burn will no doubt be looking at these mice with a fair bit of lust in their eyes. As always, we’re going to hold off making any recommendations until our pudgy fingers are wrapped around these mice, but if they work like Logitech claim they do, we’re all in for a treat.