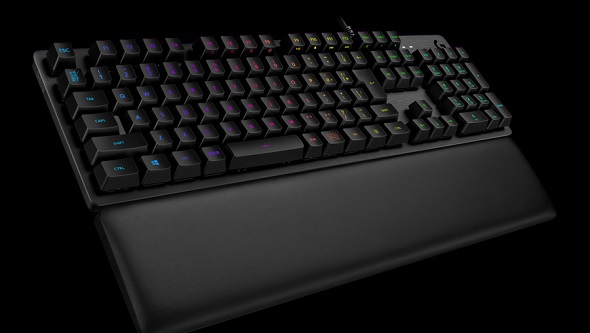 You’d be hard pressed to find a gamer who doesn’t believe that mechanical keyboards are the way to go if you’re serious about winning. They’re more responsive, more reliable, and they feel a lot more solid than the standard keyboards that come bundled with the average PC. However, where matters get a little more complicated is when it comes to what kind of mechanical switch gamers prefer.

Some gamers like a smooth keystroke that you barely even notice, while others prefer a little tactile feedback. While Logitech G’s Romer-G mechanical switches have always offered unparalleled performance, they haven’t offered gamers the choice of feedback options until now, with the new G513 Mechanical Gaming Keyboard. It gives you the opportunity to choose the mechanical switch that feels the best to you.

If you need a little feedback with every keypress then the Romer-G Tactile is the one for you. Whereas if you prefer a quieter experience then the new Romer-G Linear, with its completely smooth keystroke, will be what you’re looking for.

Whichever switch you choose, though, you’ll benefit from best-in-class performance that makes Romer-G the choice of gaming professionals. Romer-G switches feature a 1.5mm actuation distance and a low-force 45g actuation point, which translates to a faster actuation time compared to standard mechanical switches.

Assuming a finger speed of 300mm per second, a Romer-G actuates in 5.0ms, against 6.7ms for a standard mechanical switch, and that 1.7ms advantage can make a lot of difference in lightning-paced competitive games where every millisecond matters.

Not only are Romer-G switches quieter and more responsive than other mechanicals, they’re also up to 40% more durable than standard mechanical switches. If you want a keyboard that’s not going to die on you in the middle of a game, you want the one that’s been tested to 70 million keystrokes, right? The centred backlight and Swiss-engineered lens in every Romer-G switch means that the lighting is also sharper and brighter than you’ll see anywhere else.

On top of the new choice of mechanical switches, the new G513 keyboard comes with a host of other reasons why it deserves pride of place at the centre of your gaming rig.

It comes with fully customisable RGB lighting that enables you to create your own animation effects. Or you can choose preset lighting effects and animations using Logitech Gaming Software. Not only that, with Logitech G’s new Lightsync technology you can enjoy custom lighting effects tailored to individual games for an even more immersive experience.

Thanks to a strong and durable aircraft-grade 5052 aluminum-magnesium alloy body, the G513 manages to combine a thin, bladelike chassis with a solid and sturdy feel. It may be slim but it won’t slide around on your desktop. To keep you comfortable over long hours of gaming, the G513 also comes with a memory foam palmrest wrapped in waterproof and sweat-resistant leatherette that wipes clean easily and stays firmly in place thanks to six bottom-mounted rubber feet.

It’s also packed with intelligent features that’ll make your gaming life easier. That includes a game mode that’ll deactivate unwanted keys while you’re playing so there’s no danger of losing a match because you accidentally pressed the Windows key. Its 26-key rollover and performance-tuned anti-ghosting mean you’ll get exactly the results you wanted, no matter how many keys you’ve mashed simultaneously. There’s also a set of programmable function keys, complete with media and lighting controls that you can set up using Logitech Gaming Software to unleash complex macros, or even a timed series of commands at the touch of a button.

And the final touches? It boasts a much-demanded USB passthrough, so that you can charge your phone or plug in a mouse without having to get out of your seat and fumble around at the back of your PC. It also features a set of 12 spare gaming keycaps, complete with a puller so that you can quickly and easily upgrade the most-used keycaps if they start to get worn down by all the relentless action.

It all adds up to the ultimate gaming keyboard. The G513 is available now from Logitech G for $149.99 with free shipping included. Order one today before the opposition does.