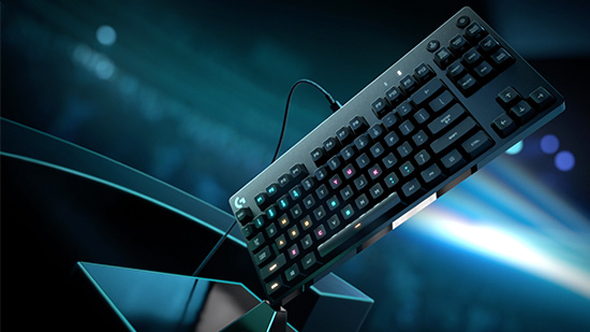 There’s a new Logitech gaming keyboard in town, and it’s aimed squarely at anyone who takes their gaming seriously. The Logitech G Pro Gaming Keyboard is designed and built to the exacting specifications of the world’s top eSports athletes, and it’s made with one simple purpose: to provide you with everything it takes to win.

Need proof? We have proof in its purest form: simple, straightforward and upfront numbers. When it comes to the reasons why you need a G Pro in your life, these are the figures that matter.

Logitech realized most gamers are not using the numeric keypad for gaming, and so 17 is the number of keys that it’s removed to make the G Pro more compact and focused than the competition. Not only does ditching the keypad make the G Pro a lot lighter and more portable, it also means that you can position your hands much more naturally, and you also gain space for moving the mouse; especially helpful if you’re into low-DPI gaming and occasionally have to let fly with a big old mouse maneuver.

If you’re a stickler for a comfortable setup, this number will matter to you. It’s the number of different height angles you can set the tilt legs on the Pro to. With its three-step angle adjustment, you can set it to 0, 4 or 8 degrees, ensuring the perfect angle for you, and the G Pro’s rubber feet mean that it won’t slide around the desk when things start getting hectic.

The G Pro comes with a cable and it’s a generous six feet in length, so wherever you take your keyboard you can be sure that you’ll have plenty of scope to position it wherever you like. It’s removable, too, so you don’t have to wrap it around the Pro and risk damaging the wiring on the move, and when you take it out again you’ll be grateful for the fact that it’s corded, meaning that you won’t have to deal with an Gordian knotted mess when you want to get set back up again. 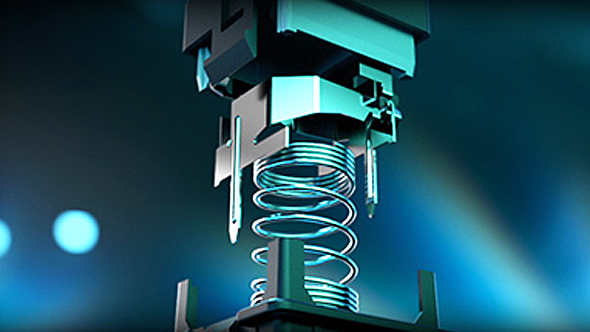 This is the actuation distance measured in millimeters– that is, the distance it has to travel before it registers a keystroke of the Pro Romer-G mechanical switches in millimeters. To put it in context, its leading mechanical competitors have an actuation distance of 2mm, and so all things being equal, the G Pro is 25 percent faster when it comes to knowing that you’ve hit a key. And if you assume that your fingertips are travelling at about 300mm per second, this works out at over a millisecond for every single keypress. So if you are playing a fast-paced MOBAs where every millisecond matters, that can put you at quite an advantage over the opposition.

It’s infuriating to hammer out a complex sequence of commands, only to find that your keyboard’s completely mangled them and ruined your devastating combo. The G Pro can save you from such ignominy, though, thanks to its 26-key rollover. It’ll faithfully keep track of the fastest, most complex sequence of keystrokes – plus modifier keys – and deliver exactly what you pressed, so you can rest assured that any error is down to your own sausagey fingers.

We’ve already mentioned the G Pro’s lighting actuation speed, but we haven’t said anything about how light a touch its Romer-G switches require. They have an actuation force of just 45g – about the same as a disappointingly small bar of chocolate. This might not seem a big deal, but if you’re planning on spending an entire weekend caning Overwatch then it all adds up, and means you can keep going longer before your fingers give out.

Even without the numeric keypad, the G Pro has a perfectly respectable number of keys – exactly 87 of them, and all of them backlit so you won’t have trouble finding them in the dark. 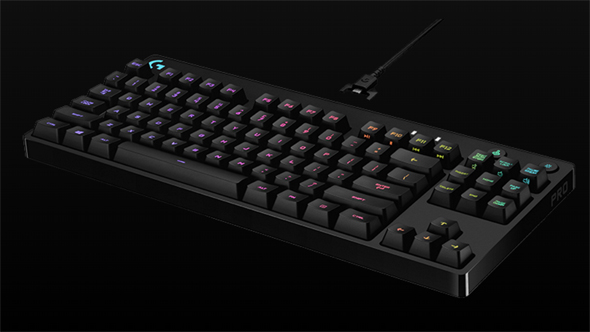 Speaking of which, the G-Pro boasts fully RGB per-key lighting, so you can set each key to any of 16.8 million colors using Logitech Gaming software. It can automatically illuminate all the keys you’ll need for just about any game you care to mention, you can use it to unleash stunning multicolored animations to celebrate your every victory, and if you don’t mind getting technical you can create your own displays using the G Pro’s SDK. Crucially, you can even use the G Pro’s lighting in competitions where custom software is banned. It features the ability to save one lighting preset to onboard memory, so it’s available wherever and whenever you need it.

We mentioned that Logitech Gaming Software will automatically light up the keys for any game you care to mention, and we can put a number to that, too. It comes with profiles for over 300 games, from the latest hits to venerable classics, so you can be reasonably sure that any game you care to throw at it is likely to be supported. And if it isn’t, it’s the work of moments to set up your own profiles.

Currently there are more than twenty professional teams and over 100 professional eSports competitors playing with Logitech G keyboards equipped with Romer-G switches. For the pros, winning isn’t just a pursuit, it is a necessary condition. The fact that so many of the pros entrust their performance to Logitech G speaks volumes about the quality and capability of the gear.

And finally, the number you’ve all been waiting for. The Logitech G Pro Gaming Keyboard is available now for just $129, with free delivery.