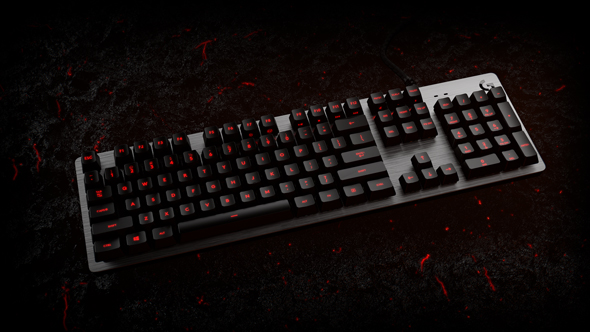 Here’s you, the hero. Over there’s the last barrier between you and success; tall and angry but vulnerable if you know how. You’ve got this. Your fingers fly over the keys… and they mush numbly down. Commands go missing. Movement becomes elastic. Hammering and desperate, your control slips away. You fail.

Guess what? It’s your fault. You wouldn’t fit a rubber gearstick and pedals from a kitchen bin to a Lamborghini and expect it to feel good, and you shouldn’t expect a bog-standard, electronically-switched keyboard to adequately control your games.

If you’re serious about fun, your setup needs a mechanical keyboard—something like the G413 mechanical backlit gaming keyboard from Logitech G. Here’s why.

Mechanical keyboards have physical switches that actuate with tangible clicks. Standard keyboards rely on silent electrical contacts you can’t feel, which encourages button mashing. The Romer-G switches found in the G413 fire after just 1.5mm under 45g of pressure (the weight of a small bag of M&Ms), making it up to 25 percent faster than regular keyboards—and for less effort and hand fatigue.

A lot of that’s down to tactile feedback, which means you stop pressing way before the full 3mm travel and spring lightly to the next key.

The G413’s keycaps are shallow cylindrical shaped for secure placement, which tell your fingers exactly where each key starts and ends. LED lighting through the keycap boosts accuracy in dark rooms, and the lamps are surface-mounted (instead of switch-mounted) for a more even, less distracting light spread and superior reliability. The G413 is available in two slick editions: Silver and Carbon. The Silver edition of the G413 offers classic white lighting, while the stealthy black Carbon edition gets deep red lighting.

As a high-end gaming keyboard, the G413 features 26-key rollover—meaning it can handle 26 simultaneous key presses without ghosting anything. Regular keyboards can simply ignore some of your commands—and you’ll never be able to tell if it was actually you. 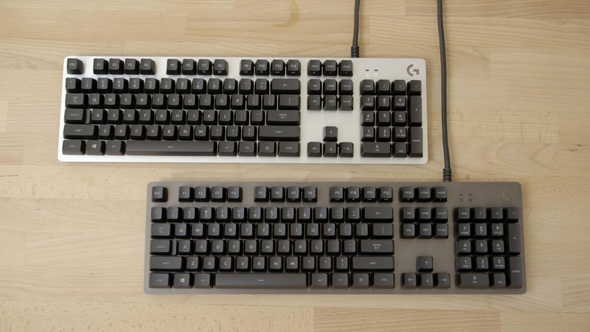 If your gaming regularly involves pressing 26 keys simultaneously, it might be easier to create a macro. The G413 can easily be programmed to unleash complex or even timed key sequences at the press of a single F-key.

Like all Logitech G’s gaming keyboards, the G413 can be heavily customized via the Logitech Gaming Software. It’s as straightforward to use as its name. While game mode (which deactivates unused but potentially game-breaking keys) is easily toggled with a shortcut, there’s plenty of serious tweaking to be found in the software. The board can be physically customized, too. It’s supplied with 12 additional, uniquely-profiled gaming keycaps and a cap pulling tool.

The Romer-G switches are built tough—they’re tested to last 70 million key presses. Regular keyboards are lucky to reach five million. The brushed metal topcase, braided cable and solid rubber-tipped feet are equally resilient. All this, plus the slim, light design makes the G413 ideal for the rigors of eSports use. 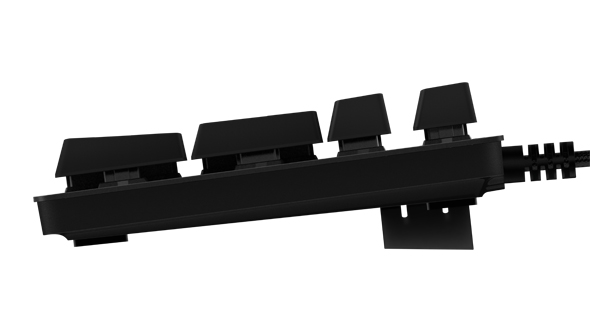 That aluminum is pretty special. Brushed for a satin finish and anodized black, the casing is actually an aluminum-magnesium alloy noted for its high strength, low weight and hard-wearing nature. Known as 5052 it’s used in, among other things, high-pressure containers.

Dedicated media controls, USB 2 pass-through for easy charging and data transfer, and an adjustable base featuring headset cable management all mean you can just get on with it. And although the G413 keyboard is no-nonsense in its abilities, it lets you get on with the only reason you play: having fun.

Learn more about adding the G413 mechanical keyboard to your gaming rig.