There are few things more frustrating in gaming than not being able to find the key you need, exactly when you need it, particularly if you’re playing a fast RTS or MOBA. These games often require a whole slew of commands mapped across various keys, and where the slightest delay in execution can mean the difference between death and glory.

It doesn’t have to be the case, though. Add a Logitech G810 Orion Spectrum to your gaming arsenal and you’re equipping yourself with an instant advantage, no matter what you’re playing. Built with gaming in mind, it comes packed with smart technology and personalization options designed to help turn things in your favor, and it’s available at a price that won’t make your eyes water.

So if you’ve ever blown a game of Dota 2 by not hitting the right key quickly enough – or hitting the wrong one altogether in the heat of battle – you’ll love what the G810 can do with its smart RGB lighting powered by Logitech Gaming Software. It comes preloaded with over 300 profiles covering all the top games, and whatever you’re playing it will light up only the keys you’ll need in-game, leaving the other ones dark so that you’re never left hunting for the command you need. 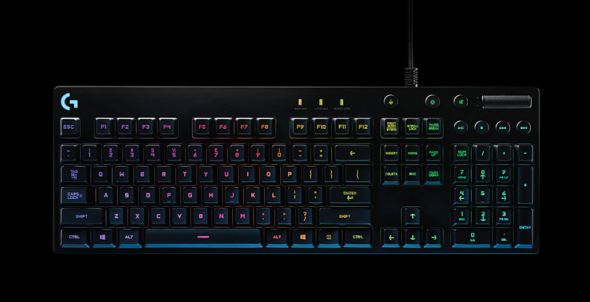 It’s fully customizable as well, so you can take things further by setting any key you want to any color you want, color-coding your layout so that there’s never any doubt about what you’re about to unleash. And the customization options don’t end there.

We’ve all accidentally pressed the Windows key in-game at one time or another, and the G810 with Logitech Gaming Software can prevent that ever happening again. When it’s in Game Mode it automatically disables the Windows key, as well as any other keys you choose, so you never need to worry about your fingers straying off point.

You can also use Logitech Gaming Software to assign custom macros to the G810 Orion Spectrum’s 12 function keys, putting complex combos and devastating special moves right at your fingertips. And with the G810, you can depress up to 26 keys simultaneously and always get the results you want.

The G810’s keycap design keeps your fingers centered and improves edge-strike activation for more direct and reliable keystrokes. And because the Romer-G needs just 45g of pressure to actuate you’ll put less effort into every key press, enough to help you enjoy longer gaming sessions with minimal finger fatigue. You can be sure that the G810’s not going to give out at a crucial moment. Its switches are tested for 70 million keystrokes, making them 40 percent more durable than their top competitor and guaranteeing years of reliable performance.

If you’re serious about your gaming then you can’t afford to be without the Logitech G810 Orion Spectrum, and the ESL agrees, adopting the G810 as its official gear. You know you deserve one.