If you’re serious about your PC games and you’ve already kitted yourself out with a powerful CPU and beefy GPU, not to mention a low-latency monitor and decent sound system, then you might think you’re done. But think again; your keyboard’s an equally essential piece of your gaming setup, and if you’re relying on the one that came bundled with your PC then it’s almost certainly letting you down with unresponsive keys that won’t last.

Your average keyboard’s weak point is in its switches. The one that came with your PC almost certainly features rubber dome switches. You press the key, the little rubber dome gets flattened and completes the connection, registering a keystroke. The reason most keyboards use rubber domes is that they’re inexpensive and they work, and for day-to-day typing duties they’re fine.

When it comes to the demands of gaming, however, they’re simply not good enough. The actuation distance – that is, the distance the key has to travel when pressed for the keyboard to register a keystroke – for a rubber dome is around 3.5mm.

What you need is a mechanical keyboard. Their mechanical switches require less travel than rubber domes, buying you precious milliseconds that can make the difference between victory and defeat in competitive gaming. The average mechanical keyboard actuates in 2mm, but if you want the best then you need Logitech’s G810 Orion Spectrum.

Instead of the standard Cherry MX switches found in most mechanicals, the G810 boasts Logitech’s own Romer-G switches, which it developed to provide best-in-class performance for gaming. Romer-G switches feature an amazingly short travel of just 1.5mm, which translates to significantly faster actuation times; 25 per cent faster than other mechanical keyboards, giving you an instant edge over the competition. And they take just 45g of pressure to actuate, requiring less effort from you and meaning that you can play longer without your fingers cramping up. 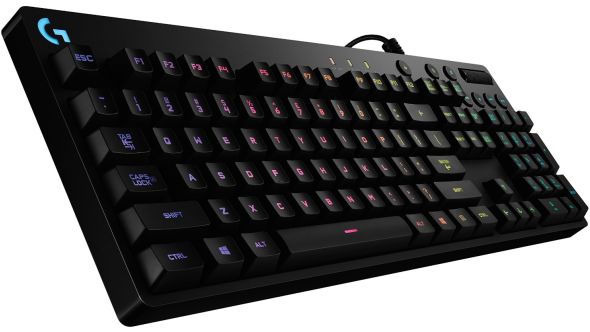 Romer-G switches are tested for 70 million keystrokes too, making them 40 percent more durable than the top competitor. You can rest assured that they’re not going to give out in the middle of a gaming session, either now or years down the line.

There’s more to the G810 Orion Spectrum than its mechanical switches, though. It features a 26-key rollover which means unless you have more than 26 fingers pressing simultaneously, you’ll always get the results you want. It also comes with advanced Logitech Gaming Software which enables you to set up custom macros across the function keys and switch off keys you don’t need when you’re in Game Mode.

Logitech Gaming Software also provides the power behind the G810’s stunning smart RGB lighting, enabling you to light up any key in any color you want. You can set the keyboard to display dazzling rainbow waves, but more importantly you can use it to ensure that you’re always able to see your control. Logitech Gaming Software comes with presets for over 300 games that’ll illuminate just the keys you need, whatever you’re playing, ensuring that whether you need to lob a grenade or unleash a complex command macro, you’ll find the right key instantly.

The Logitech G810 Orion Spectrum is the weapon of choice for pro gamers and the official gear of the ESL. You know you deserve one, and now’s the ideal time to buy and complete your gaming rig.