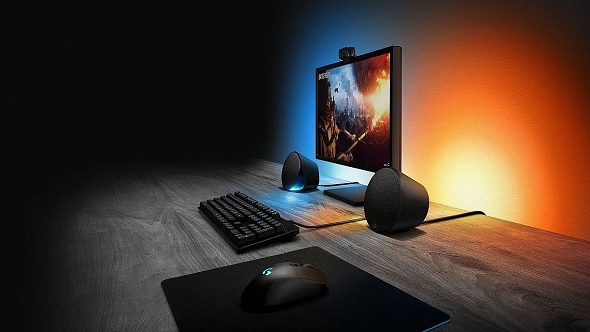 Why limit your gaming to just the screen? Pushing vital sound and light effects right out into the room lets you play with all your senses unrestrained. That’s the thinking behind the new G560 Lightsync PC Gaming Speaker System from Logitech G, which debuts a new technology – Lightsync – to link light and sound cues to in-game events in real time. It’s the next step in immersion, it’s a real tactical advantage… oh, and it looks absolutely awesome in action.

This is Logitech G’s first speaker system in its gamer-specific G-series, which introduces the first ever game-controlled sound and light. Lightsyncgives clear peripheral cues for a myriad of uses: say, to warn of approaching enemies or indicate directional damage. The massively enhanced explosions will blow your mind, too.

It does it all by spraying custom-coloured RGB light up the walls from rear-facing lenses, and more in separate streams from the front – think of it as the equivalent of audio subwoofers and tweeters. This works with light, colour, and meaning, however, instead of frequency.

Of course, any lightshow would be wasted if the speakers weren’t up to it. But being G-Series, they’re honed for gaming. The 240 watt peak, 2.1 system features a down-firing subwoofer plus two satellite speakers equipped with super-strong metallic drivers. Due to the speaker’s tilt and angle, you’re able to hear optimal audio from a wider range of placement – meaning there’s always a sweet spot for sound when placing your speakers.

Combined with next-gen DTS:X positional audio, you get ultra surround sound that, like Lightsync, expands the experience way beyond your screen. Positional surround sound means you instinctively know exactly where those footsteps are coming from, which gun just ran dry, and which way to run.

Playing audio instead of games? The G560 connects to your music, too. It has multiple inputs so you can connect up to four (via USB, Bluetooth, or 3.5mm jack) and switch easily between them with, well, Logitech Easy-Switch. So not only can you take advantage of the G560’s clear, powerful sound, but the Lightsync audio visualizer creates light responses driven by the music.

The audio visualiser rises from a soft pulse against quiet sections to bright flashes when things get noisy, with the rear lights handling bass and the fronts picking out the mids and highs. You can customise effects, colours, and profiles with Logitech Gaming Software, the powerful free software that controls all G-Series tech.

But games are the heart of the G experience. From launch, titles including Battlefield 1, Fortnite, GTA V, Dota 2, Counter-Strike: Global Offensive, and Final Fantasy XIV: Stormblood will support Lightsync.

The likes of Mass Effect Andromeda, The Division, and Killing Floor 2 will gain integration soon after. Racing game fans in particular will be pleased that both Assetto Corsa and iRacing are on the list, but many games, of all styles and genres, are set to take full advantage soon. Maybe you should too?