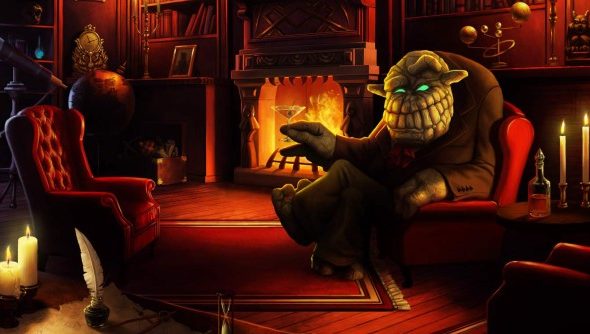 To call Jagex an odd developer, would be an understatement. They’re the largest developer in the UK, but many gamers haven’t heard of them. In the eleven years they’ve been around, they’ve worked on just one notable game – RuneScape – which was released before they existed as a company. And they’re about to sign up their 200,000,000th user account, which must be more than any other game. We caught up with them to find out how the game was made, how they’ve changed it over the years, and how you keep working on the same game for over ten years.

Related: Check our guide to the best PC MMOs.

In the 90s, Andrew Gower was bored. He wanted to play games – he loved playing games – but he couldn’t afford to buy any. So he decided to start making them instead. Mark Ogilvie, the current Head of Content and Lead Designer on RuneScape, explains more. “A lot of the games that Andrew made originally were games that he read about and wanted to play, but didn’t have enough money to buy. So, he saw Lemmings at a friend’s house and wrote a game called Flea Circus, just like Lemmings.” All through his school years, this lack of readies fed Andrew’s creativity.

By the time Andrew was at Cambridge he was a fully-fledged computer science student, with a sideline in game design; which meant he just wanted to play games, rather than do any work. Most of all he loved the rare online roleplaying games but he hit a snag. Ogilvie explains; “whatever library he was at, he wanted to be able to log on and play a game. His main aim was to write something that was easily downloadable and that he could play straight away. The idea of a mobile boot file was quite rare back then; the other things on the markets were things like NeoPets and text-based RPGs.”

This was Gower’s big idea. By accident or design, by making the game accessible for himself, he had made it accessible for everyone – students and schoolchildren in particular, who didn’t normally own their own computers, could play the game for short periods without having to install anything other than a small plug-in. At the time, this was a huge advantage.

The accessibility was continued by Andrew’s brother Paul, who gave the game a theme – an accessible medieval fantasy world. “Both of them had lived and breathed traditional tabletop and board games from a young age, games like Sorcerer’s Cave.” says Ogilvie. “Paul brought that theme to the game.” A lot of the creativity, particularly the map of Gielinor, was based on the products Paul had experimented with as a child.This openness about sources also meant that the game was open about new content. “As long as you had a strong backbone to the product, you could explore all sorts of different angles, genre or modes of storytelling.” says Ogilvie. The game became more about making entertaining quests and content, than about sticking to some canon theme, and throughout 2001 it became more and more popular. Andrew was producing games for other websites when he met Constant Tedder, a key figure in the creation of Jagex. The Gowers had run into a problem, Ogilvie explains; “they’d realised that the dotcom bubble had burst and that they weren’t going to get the money that they needed to run the servers from straight advertising.” Tedder helped them introduce the members’ version of the game and brought his business nous to the new company, Jagex, founded at the end of 2001.

The minimal monthly fee bought players minor extras; a couple of new skills, including herblore, and specific pieces of quest story content. It also allowed Jagex to hire staff to help develop the game, and their first ‘office; a room barely larger than a broom cupboard in the St John’s Innovation Centre in Cambridge. It was a gamble, but one that paid off immediately; enough people signed up to make the company immediately profitable, over 5000 subscribers in the first week and 1,000,000 accounts in the first year.

The concept that distinguished Jagex from the industry at this time was the fact that they were doing weekly content updates. “Rather than change the foundations of game, we were layering more stuff on.” says Ogilvie. Where many contemporary MMOs still balk at the concept of monthly updates, the Jagex team produced significant content – new quests, dungeons, mini-games and skills – on a weekly basis. “The rate at we produced content back in the day was just crazy.” says Ogilvie, who’d joined Jagex by this point. “A RuneScape quest is different from most MMOs anyway, it’s more like Mass Effect.”

By hiring staff and letting them explore the stuff they enjoyed, Jagex kept them creative. What kept them fast was the simplicity of getting content into the game. RuneScape wasn’t a complicated game anyway – and the backend allowed the developers to rapidly prototype content so that it worked within the umbrella of RuneScape. “It’s the most frequently updated game of all time” says Adam Tuckwell, RuneScape’s PR manager. “That’s a Guinness World Record.” It’s one of several the company holds. Nowadays, they still produce lots of content, but with their much larger team, they can be working on each piece for three or four months, and as many as 25 content updates and 20 technical updates are in the pipe at once. RuneScape 2, developed during 2003 and released around April 2004 (just before World of Warcraft), moved to the game into 3D. The team was around 40-50 people at this time. It was a brand new 3D engine that Andrew had been working on for other ideas he’d been thinking of exploring. “We were very afraid of change.” says Ogilvie “so we gave everyone an option; they could migrate all their characters and items over to RuneScape 2, or keep them in RuneScape classic.”Most players moved over to the new game, which was renamed RuneScape. “We had thought about calling it RuneScape 3D.” says Ogilvie “Other games use huge updates that redefine the game, or an expansion pack might have a huge name, but we don’t do that because ours are so frequent. We’ve had a hell of lot of updates that have been bigger in terms of size and effort than RuneScape 2, like the Dungeoneering update or the upcoming Combat update.” By March 2006, they’d released over 100 quest updates and2007 saw the launch of the game in Germany.

By 2008, the game was again looking tired, so the team bolted-on a new high detail mode, to coincide with the French language launch. “It allowed us to run HD graphics at a much higher level than otherwise, with the same FPS rates, but we still allow people to use the tiny little letterbox. A hefty amount of players still play in the limited window mode, as they find it more efficient.”

By 2010, the team mooted opening the creation tools up to the community, but backed down several months later, though Ogilvie is still thinking about it. “It wasn’t viable at the time, but we’re always looking at it. One of the things we allowed players to do in the Clan update last year was to create their own battlefields, custom maps to battle other clans in. It was an exploratory punt to see if our user base is really interested in doing that kind of thing. As a company, we’d love to give our users access to the development suite. I’m always putting tools into the game allowing players to come up with their own games – but it’s a huge amount of development effort.” 2010’s Dungeoneering was Ogilvie’s pet update, drawn from his love of games like Advanced Hero Quest, and his days working for Games Workshop and TSR. “That’s the kind of game I grew up on, and made me realise I could be a designer… So many times in an MMO, you log in and look at all your kit and your bank, and ask yourself ‘what should I do now?’ Particularly, as you get older and time-starved, and only have a couple of hours to play, most of which you spend working out what to do.” Dungeoneering introduced snack-sized dungeons for up to five players, introducing the classic RPG group of a wizard, warrior and rogue. It also required you to craft new equipment at each level and randomly generates layouts and enemies depending on the skills and numbers of your exploratory party, meaning that players actually got to use all the skills that they’d spend years developing.

Meanwhile, the Gowers and Tedder sold their shares and left the company in 2010. The company was now approaching 500 employees and it seems they preferred to work in smaller groups. Andrew now runs his own company, Fen Research, working on the next generation of hisgames; he’s yet to reveal anything. (We did approach him for a contribution to this feature, but he didn’t respond.) The Clan Citadels update that Ogilvie referred earlier to came in 2011 and allowed players to create homes and citadels in the game. “At the end of the day, MMOs are meant to be social products. A lot of players in the early days played RuneScape like a glorified chat channel. Like MSN, but they just happened to be killing skeletons and chopping down trees at the same time. Over the years we forgot those roots; the more core, intense gameplay we came up with, the less people felt able to sit back and chat.” The clan citadels is a huge environment that players can personalise, invite friends to and create battlefields, as well as diversified chat channels.

Nowadays, Classic, the original version of the game, is still played by some subscribers. It has a few thousand people who prefer the nostalgic feel, though it’s blocked off to new users. Ironically, the Jagex team are struggling to keep it going because they have so few developers left who remember how it actually works. Meanwhile, RuneScape is still going, slowly growing its content year by year, and Jagex is trying to find its way to showing its not a one-trick pony. With a first trick as spectacular as this, that’s going to be hard to do.