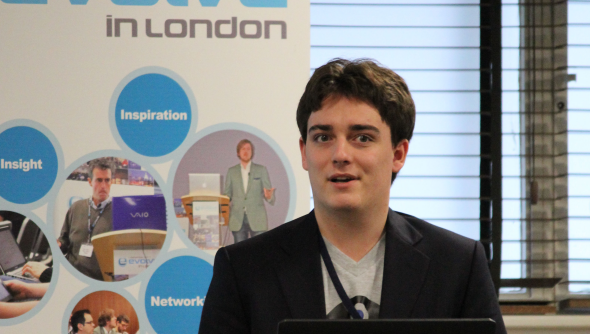 Palmer Luckey says he’s not very good at presentations. He begins his address to the Evolve 2012 crowd with this halting caveat. It’s nonsense.

While he might not feel comfortable, he clearly knows his subject. He has an almost intimate knowledge of VR, he understands why it never really worked in the past and, most importantly, he can explain why the failed fantasies of the 1990s can finally be realised.

Virtual reality, he says, is the future of gaming.

Early versions of the technology were “overhyped by the manufacturers,” he says, with many advertising products that were expensive, underwhelming and, inevitably, rarely sold. “The virtual reality market remained a consumer electronics Bermuda Triangle. A lot of companies went in, weird stuff went down and very few came out,” he says. “The reality was, virtual reality wasn’t that compelling at the time. It was a pretty hokey technology.” (The above is taken from Sean Clark’s history of VR.)

But our cynicism belongs in the past alongside that long obsolete hardware. Now, we live and we play in a very different world. “Video games have come a long way. Software’s come a long way,” says Luckey. “You can buy console hardware capable of rendering near-photorealistic environments with near-perfect physics for less than $300. PC hardware is a step above even that. The videogame industry is bigger than Hollywood at this point. That would’ve been unbelievable ten or twenty years ago.” Similarly, it’s time to reconsider virtual reality not only as something that we can finally do justice to but, Luckey continues, also as a whole new way to present gaming.

We shouldn’t think of ourselves as players tied to monitors and keyboards because, no matter how good this hardware gets, “You’re still viewing an unrealistically-sized representation of a game through a window on your desk,” as Luckey puts it. “That’s more suited to traditional content, like movies or sports coverage, that’s actually filmed with that display in mind.” Games, however, don’t have to be made with the expectation that players will only stare into a screen and we’ve already found plenty of ways to change this experience. The WiiU comes with a handheld device that can function as a secret tablet, the Xbox’s Kinect watches us play and the PlayStation Move brings more physicality to our gaming. Why not re-evaluate what virtual reality might be able to do in the modern age? The technology is certainly up to it, and that’s not just in terms of raw processing power or better graphics cards, but also many other hardware requirements. VR isn’t a single technology: it’s made up of a multitude of gadgetry that has to work together to create a realistic impression of an alternate reality. Alongside high fidelity and high framerate graphics, it also demands stereoscopic vision (requiring two high-density displays running in sync), precise, responsive motion tracking and as wireless an experience as possible. Missing twenty years ago, today these different technologies have long since established themselves.

“Independent of virtual reality, [all these] things have progressed,” he says. We now can (and do) buy high-density graphical displays that are small and light for the equivalent of a few hundred dollars, while mobile devices often put dirt-cheap motion trackers in the palms of our hands. “We have high-performance, precision motion tracking available for dollars instead of thousands of dollars. These days, even mobile phones have gyros.” And, of course, latency-free wireless controllers have now become the norm.

It’s products like the Oculus Rift that will combine all this progress into a single virtual reality device, but that doesn’t mean that the problem of virtual reality is solved. The issue now, says Luckey, is whether developers are ready for it and are able to make good use of it. A virtual reality game immediately suggests not only a first-person perspective, such as that of a pilot in a simulator or perhaps a soldier in an FPS, but a particular take on first-person gaming. Cutscenes, Luckey says, provide just one example of how developers should think about how these games will work. “Any time you take away control from the user you’re going to break their sense of immersion,” he says. Since virtual reality is all about freedom and control, any cutscene that takes control of the player or brings them outside of their own point of view is immediately jarring. While it might be fairly easy to port some games to virtual reality devices without too much modification, Luckey believes that creating wholly original titles is likely to be hard work. Nevertheless, it should encourage developers to create titles that are particular to the medium and that make the most of what it offers. This is true for any platform, he says. “The best games for Android were designed with a touchscreen in mind. It was the same thing for the Wii or the DS. I’m not a software developer, so I can’t pretend to know what all the possibilities are,” he goes on, “but there’s a lot of people we’ve talked to who’ve said ‘You know what? I’ve got an idea for an entirely new genre that’s only possible with virtual reality.’”

And he’s talked to a lot of people. Whatever plans they might have, developers are clearly very, very interested in the device. id software’s John Carmack was an early supporter of the Rift and its Kickstarter campaign, which raised nearly ten times the requested $250,000, saw 5,640 orders for development kits.This has kept Luckey very, very busy. “I’ve been talking to literally hundreds of developers, from triple A studios to indies,” he says. “One thing I’ve noticed is that developers in particular are the most likely group to want to play with virtual reality. Developers are the ones who spend years of their lives working on a game that is an incredible, beautiful, synthetic reality. They’re the ones that most want to step inside of them.”

Playing inside a virtual reality may well also demand some very different control schemes. While a pilot in a cockpit may be content to sit in their chair holding a joystick, we should consider moving away from mouse and keyboard setups, putting our joypads aside. Players are likely to enjoy more intuitive control schemes provided by a new sort of peripherals and it’s worth remembering that, no matter how ridiculous something looks while your helmet is off, once you’re inside a virtual reality, that controller could be motion-tracked and rendered as something you see yourself holding in-game. The light guns of old could become rifles, while I can easily imagine a Wiimote as the handle of a lightsabre. Again, such devices can be wireless and free of latency. Looking a little further into the future, and perhaps with a bit more speculation, Lackey also mentions haptic technology, devices that respond to touch or give stimulation to the player based on something that happens in a game. We already enjoy rudimentary haptics whenever one of our joypads vibrates, but so much more is possible. Haptic gloves, for example, could cause a player to feel as if they’re touching or holding a particular object, getting a sense of its malleability as they move their hands around it.

Luckey speculates that there more technical advances to come: he goes on to discuss “one of my favourite things that’s probably never going to hit the market: galvanic vestibular stimulation. It’s basically technology that allows you to stimulate your inner ear, to simulate orientation and acceleration… um… using electrical impulses.”

“It’s really cool. I and I have some GVS systems I’ve put together myself,” he adds, and what he says next brings a broad laugh from his audience. “It’s not particularly safe… There’s no proof that long-term use causes permanent harm.” Regardless, it can be painful. Galvanic vestibular stimulation essentially involves delivering electrical charges to the head. Everyone’s skin, Luckey explains, tends to have different levels of conductivity and what may feel like a mild tingle to one person might be a painful shock to another. As he closes, Luckey says that he doesn’t see virtual reality as the sole future of gaming, replacing our desktops, tablets and consoles, but that it’s more like to give us a new way to play. “I don’t think that we’re going to see a lot of studios making virtual reality only titles,” he concedes, “as much as I would love for that to happen.”

What he does see is a future for virtual reality, and devices like the Rift, that extends well beyond just gaming and has far, far wider implications. “It has the potential to revolutionise all kinds of fields: gaming, medical, education and more. Virtual reality can let you experience anything, interact with anyone, go anywhere,” he says. “Look at a site like Wikipedia, it’s a huge revolution for anyone in the world to have free access to information. What a big jump it would be if people could actually experience anything in the world, if people could actually virtually travel anywhere in the world and learn from a medium that’s a lot richer than text.”

This may well be the true future of virtual reality, something that extends far beyond just gaming and recreation.