If you’re just getting started in Loop Hero, and are looking for some beginner tips and tricks, look no further. In case you haven’t started your adventure yet, here’s the situation: the world as we know it has been destroyed by The Lich, and it’s our job to rebuild reality.

As the Loop Hero sets out on their expedition down a randomly generated path, you can place various cards down to adjust their adventure, and generate loot, resources, and enemies. These cards drop from monster encounters; they’re drawn from a deck that you build before each outing. You won’t get far by chucking down cards whenever you get them – the key is to manage the Loop Hero’s adventure by feeding them a manageable diet of foes and buffing up the board to keep the regen coming.

If you wait until you complete a loop and arrive back at the camp to head back home, you’ll leave with all your resources; if you decide to retreat mid-loop, you’ll only keep 60% of them. Die, and you’ll retain a meagre 30%, so it’s important to play it safe.

To find out how to get the most of every loop, here’s everything you need to know before you play Loop Hero. 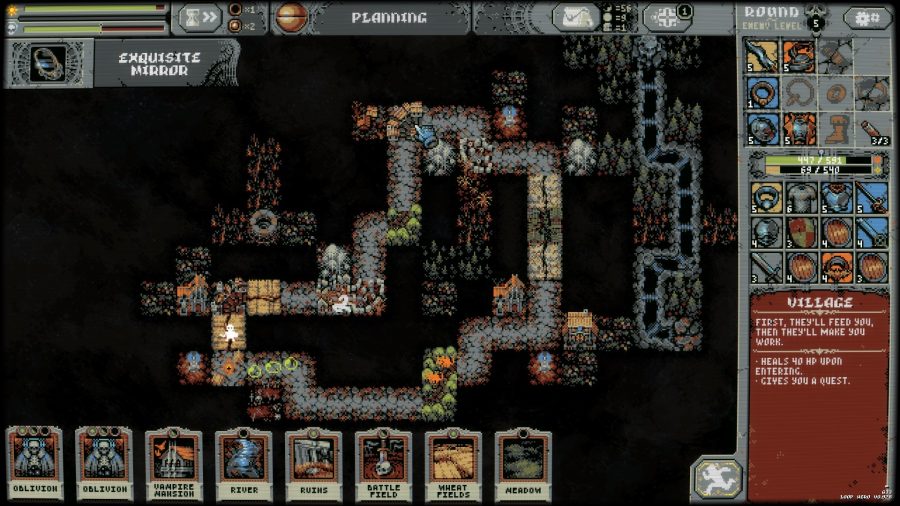 Each time you play a card, the bar in the top left hand side, next to the skull, fills up. Once this bar is full, the boss will spawn. This means you need to think about placing your cards tactically, in order to maximise your earnings before the boss arrives. Once the boss spawns, though, you don’t have to fight him – you can still retreat to camp and return another day. Simply enter the planning stage on the square before the camp, and you can head back with all your resources.

You can only hold thirteen cards in your hand at once; any additional cards you receive will send your oldest card off to become Memory Fragments. Ten memory fragments make a Book of Memories.

The circles at the top of each card indicate where they can be placed. Full spheres indicate it can be placed on the road, half spheres mean roadside, and empty means in the open.

Battlefield cards give you loot chests that are scaled to the current loop level, so you should place them as early in the loop as possible. 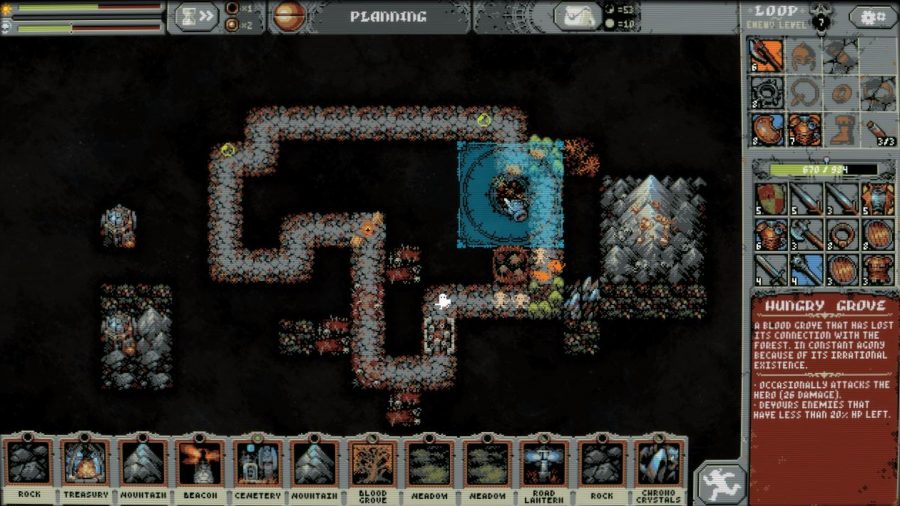 When placed adjacent to one another, certain combinations of cards give additional benefits, or modify the terrain in some way. Oblivion cards remove placed cards, which can also result in new combinations. For example; removing a Village after placing a Field tile next to it will turn it into an Overgrown Field, which spawns Field of Blades enemies.

We recommend you save up Oblivion cards; they’re particularly useful for removing Lich Palaces that spawn alongside the boss, weakening him – or simply for removing any monster-generating tile that’s causing you trouble.

There are many more combinations – finding out for yourself is all part of the fun. 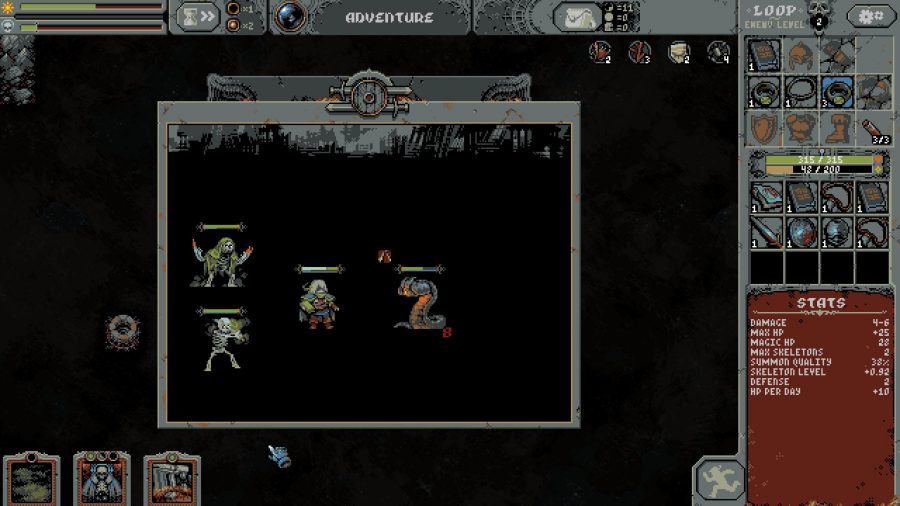 The three Loop Hero classes are: 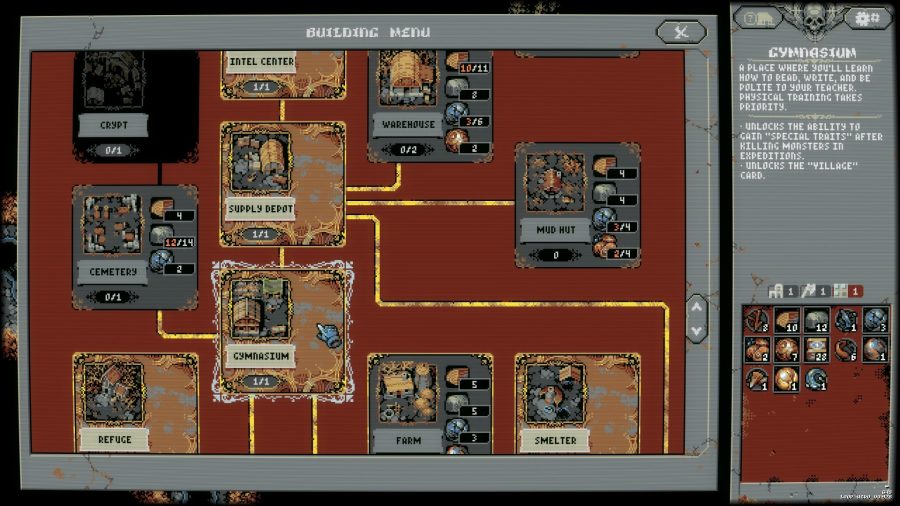 To begin with, you want to focus on gathering resources so you can build and upgrade your base camp.

Once you build the Gymnasium, you unlock the ability to level up and choose new traits during a loop. The ability you’re offered is randomly selected from your class table, so it’s up to you to decide which best fits that particular excursion. This also unlocks Village cards, which give you quests to receive more experience and loot.

Upgrading your Field Kitchen to a Diner will heal you before a boss fight. The Smelter gives you an Arsenal card, which allows you an extra equipment slot. The Herbalist’s Hut unlocks potions, and the Supply Depot allows you to craft one random food item, or one random food. 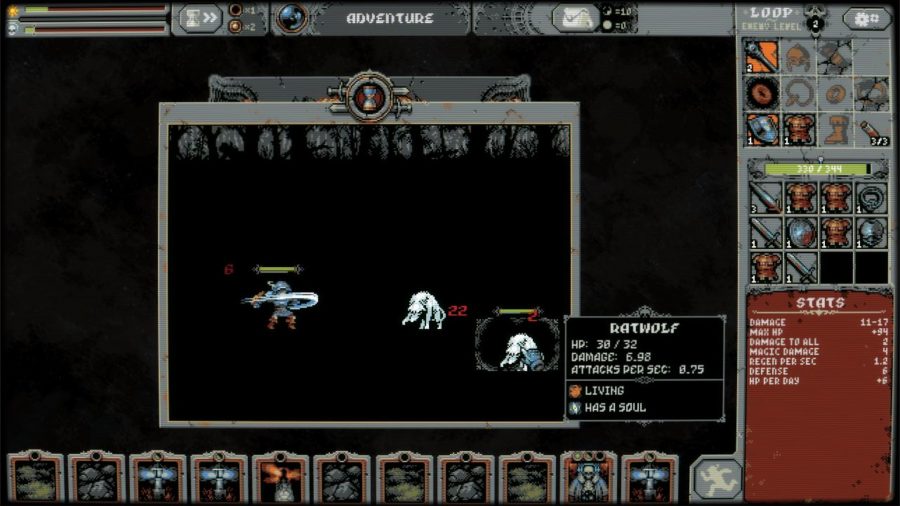 Fighting is automatic, so you’re mostly going to sit back and watch it unfold – however, equipment can be changed mid battle if you so choose. You have a stamina bar beneath your health bar when you fight; a larger version of your health bar is also on the right, above your inventory. After you unlock potions by building a Herbalist’s Hut, there’s a notch on your health bar; when your health drops to this point, you’ll automatically drink a potion.

When defeated, enemies will usually drop items. There are four different rarities for items; grey, blue, yellow, and orange, each rarity level providing an additional stat boost – so grey items have one stat boost, blue has two, yellow has three, and orange four. Percentage-based buffs will scale much better than flat numerical buffs. You can hold up to twelve pieces of equipment at once; any more will cause the oldest equipment (on the bottom right) to be converted into Scrap Metal.

Magic damage ignores defense, and defense subtracts a set amount of damage from each attack. Be careful not to increase your attack speed too much when playing as a rogue or warrior; this is extra important as a rogue. This is because if you run out of stamina, you incur a heavy evasion penalty. At the start of each loop, focus on defense, rather than attack. If you mow through foes too fast, fewer monsters will spawn; it’s better if it takes you longer to progress round the loop.

Need a hand? The best card games on PC

Right-click to enter planning mode during combat so you can have a second to plan after combat end, before your hero wanders into the next tile.

Those are all the Loop Hero tips we’ve got for you. If you’ve forgotten it all already, head back to the top and read it again, as many times as you need.