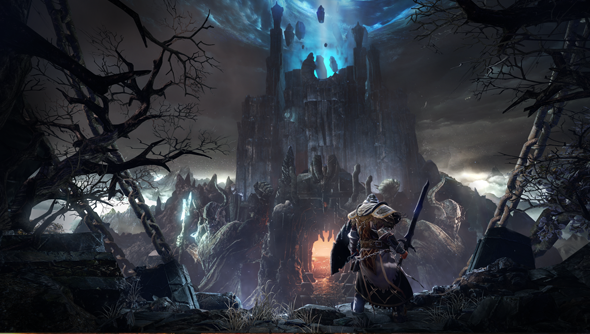 I’m about to be cut in half again.

I’m fighting Lords of the Fallen’s tutorial boss, the First Warden, and it’s teaching me about timing and positioning, largely by slicing me in two. Every time I make mistake either by attacking too soon or attacking too late, or positioning myself too close to the warden it’s game over. Often with a single blow.

I’m also about to be cut in half again because Lords of the Fallen has some serious flaws.

You can’t escape the Dark Souls comparisons: in Lords of the Fallen Deck13 Interactive have made a game in which big men in big armour swing big swords at big demons. You play Harkyn, a prisoner released from prison to find the source of the demons invading your world. The trip will take you from Harkyn’s world, filled with snow-topped castles, Lord of the Rings-esque mountain passes, and dank dungeons into the demon realm of fire and brimstone. Along the way you’ll level up your stats, earn powerful loot, and learn you spells to aid you in the demon killing.

For all his muscles, bravado, and broadswords, Harkyn is surprisingly vulnerable: most enemies can cut you down in a few hits or at least severely damage you so that the next monster can finish you off. Instead of running into fights like you might in Darksiders, Lords of the Fallen requires a more patient playstyle.

You navigate Lords of the Fallen’s battles by learning your enemies’ moves and how to counter them. When a rhogar, a demonic knight with a six foot long, two-handed battle axe, begins its spinning swing (basically a pirouette with added axe) you have to know to roll into the attack. The dodge move takes you under the weapon and into place behind the creature, close enough to attack him back. Rolling with the attack would land you right where the swing ends, resulting in damage, rolling backwards would leave you undamaged but too far from the rhogar to attack while he’s recovering, and blocking the swing would have seen you take damage anyway.

More than any game I can remember, Lords of of the Fallen places a great deal of emphasis on stamina. Chaining together a combo of attacks will drain your energy bar and force you to retreat and recover. If you try to button mash you’ll be left unable to raise your weapon, either to attack or defend.

Death comes frequently. When you do drop, you’re returned to your last checkpoint, previously defeated enemies are respawned, and any experience earned in the last run is removed. XP from kills can only be applied when you reach a save shard. It’s a tricky system: dropped XP can be retrieved from your corpse, if you make it back first try. If you die on the way, your new XP drop will overwrite the old one.

At save shards, you can spend XP to level up – from functional stat bumps to smarter spells. A decoy, for instance, might save you from being mobbed next fight.

Or you could hold onto the XP.

Deck13 have introduced an almost cruel risk/reward mechanic to XP in Lords of the Fallen. Occasionally when you kill an enemy it drops a weapon. The more XP you’re carrying, the better the weapon drop will be. If you’ve not banked your points in a while, maybe holding onto a few thousand XP points, your enemies might start dropping epic weapons. High damage, high speed, light weapons that would let you cut your enemies to shribbons.

Completing Lords of the Fallen without once banking XP surely will become the game’s legendary achievement. 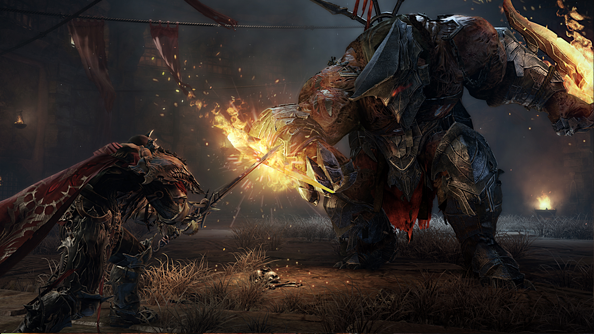 These are compelling and intelligent systems. But Lords of the Fallen has serious flaws.

First, there are crippling issues with the game’s camera. The first section of Lords of the Fallen throws you into a mountaintop monastery that’s overrun with demons. The building’s all tight tunnels, staircases, and pillars and all too frequently the camera gets in the way. To be killed by an enemy you couldn’t see because the camera was trapped too close behind your thick body is just infuriating. The camera problems might not be constant but they happen enough to be worth mentioning.

Then there’s enemy placement. Baddies in Lords of the Fallen stand in place waiting for you to come to them, like mini arena bosses. This is largely fine: until you come across foes that are hidden behind blind corners. You only find out they’re attacking after they’ve attacked. Not fair.

I wish, too, that loot drops were tailored to your playstyle.

Even though my character was a rogue that used deception magic, a class built on speed and agility, the two weapons that dropped in my two a half hours with Lords were a double-handed battleaxe and a double-handed great sword. Even if I had been able to use them (stat requirements notwithstanding) nothing about my choices I’d made so far suggests I’d want those heavy weapons. 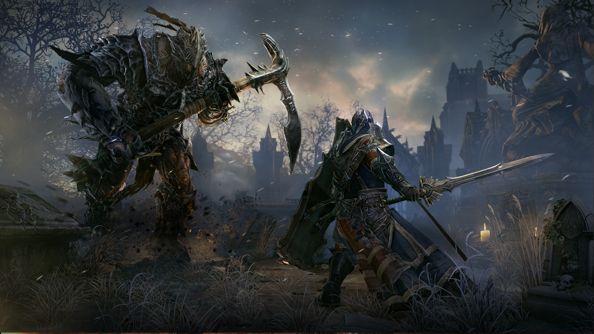 It may just be that Lords of the Fallen isn’t particularly roguish. I was rarely able to sneak up on an enemy – they’re almost always spawned facing the entrance, and there was little point in sacrificing armour. In most RPGs, rogues sacrifice armour for stronger attacks: but in Lords of the Fallen, you’re both weak and puny. The First Warden fight took over 15 minutes to complete – me just rolling in and out of his attack and gradually whittling away at his health bar with my tiny little blades.

I found Lords of the Fallen infuriating. I think some of its systems are excellent, encouraging a thoughtful approach to combat that could have just been another button mashing brawler. It almost feels like a puzzle game: one in which you’re gradually figuring out how exactly to approach each enemy.

But just pick a warrior as your opening class.