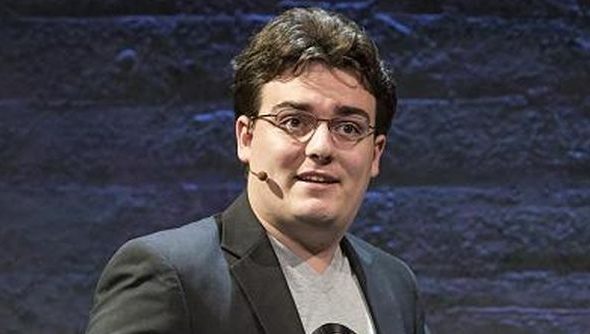 Update April 19, 2017: Following last year’s controversy and backlash – detailed in the previous stories below – you might have thought Oculus founder Palmer Luckey would have stepped back from financially funding political organisations, but it seems he sent Donald Trump $100,000 in January this year.

The $100,000 was sent to President Donald Trump’s inaugural committee on January 4, from a company called Wings of Time. There was no name associated with the organisation on the listing, according to a report by Mother Jones.

If you want to escape this planet for a bit, here’s our list of the best VR games.

The committee filings show an address in Los Angeles for Wings of Time, but company records show a different address, located in Long Beach. It’s an address Luckey has used in the past for other business projects.

Update September 28, 2016:The fallout continues after the revelations that Oculus founder Palmer Luckey had been funding a pro-Trump meme posting organisation with ties to the alt-right.

Already developers have been threatening to boycott the VR platform until Luckey stands down, but now members of theOculus Diversity Program are speaking out against him.

As Buzzfeed report, back in May there was an Oculus developers bootcamp dubbed the Launch Pad program, a fellowship designed “for diverse creators to build for VR.” Luckey was the final speaker at the event, and many took this as a sign: the Oculus founder wants to build an open and diverse company.

Recent revelations about his political leanings obviously fly in the face of this, so members are now voicing their concerns.“The mood is surprise, shock, dismay, and disappointment,” one Launch Pad fellow, a California-based producer, told BuzzFeed News. “A number of people are creating documentaries to address social issues, and they are questioning whether Oculus is the right platform.”

Alejandro Quan-Madrid, a Launch Pad fellow based in Los Angeles, claims Luckey’s political donations make him feel like a hypocrite. “I’m doing a Day of the Dead project and showing it at Day of the Dead festivals,” he told BuzzFeed News. “How can I promote that when the head of Oculus is giving money [to support] Trump – and Trump wants people in my community to be deported?”

It seems that things are even happening within the company itself, asthe Launch Pad coordinator, Oculus Diversity lead, Amy Thole, stopped working for the company just a couple of days ago. She explained the move in an email to fellows, saying there would be an “Oculus Diversity transition” to new leadership, with Ebony Peay, previously executive assistant at Oculus, taking her place. There was no mention of recent controversies in the email.

Launch Pad fellows have just a few days left to decide whether they will accept funding from Oculus or send a message, as the winning projects will be announced in October. If they choose to do the latter, they’ll be joining scores of developers who have already done the same. More on that below…

The co-founder of VR giant and now Facebook subsidiary Oculus issued an official response to reports that he bankrolled pro-Trump meme machine Nimble America by denying he wrote supportive Reddit posts under the pseudonym NimbleRichMan.

“I am committed to the principles of fair play and equal treatment,” Luckey states in a Facebook post. “I did not write the “NimbleRichMan” posts, nor did I delete the account. Reports that I am a founder or employee of Nimble America are false. I don’t have any plans to donate beyond what I have already given to Nimble America.”

However authors of the original Daily Beast article, which exposed Luckey as the near-billionaire backer of the campaigning organisation, have revealed email exchanges in which the $700m net-worth entrepreneur explicitly admitted to penning the posts.

Here is where I sought that clarification from him and what he said. pic.twitter.com/pPfLKUX5Cg

Further evidence from Resnick, co-author of the Daily Beast article, shows Luckey identifying posts made under the NimbleRichMan moniker as representative of his own personal views, as well as admitting to publishing at least one by his own hand.

Also, here’s a video of Palmer Luckey at a Trump rally in Costa Mesa (at 1:53) in case that wasn’t quite enough:

Update September 23, 2016:A number of VR developers are threatening to boycott Oculus if its co-founder, Palmer Luckey, isn’t kicked out of company following the revelation he financially supports an organisation focused on discrediting Hillary Clinton with unflattering memes.

As reported in the original copy below, Luckey revealed he was pumping cash into a pro-Donald Trump organisation set up to undermine Clinton’s campaign for US president in an interview with The Daily Beast.

Now, in reaction, a slow trickle of developers have taken to Twitter to claim they will pull support for Oculus if Luckey doesn’t step down from his position.

As reported by Vice’s online magazine Motherboard, the number of developers ditching Oculus appears to be small in number and the studios involved largely indie.

Nevertheless, it could nevertheless be crucial for Oculus as it looks to hold on to developer support in these early days of the VR wars.

Until @PalmerLuckey steps down from his position at @oculus, we will be cancelling Oculus support for our games.

Indeed, it’s also important to note that this by no means represents the majority of Oculus developers. Many have declined to comment when pressed by the media, and one – Carboh Games co-founder James Green – dismissed any notion of dropping Oculus.

“This backlash is nonsense,” offered Green. “I absolutely support him doing whatever he wants politically if it’s legal. To take any other position is against American values.”

The group claim responsiblity for abillboard posted outside of Pittsburgh that showed a blown-up image of Clinton’s face alongside the words ‘Too Big to Jail’.

“It’s something that no campaign is going to run,” Luckey said of the billboards. “I’ve got plenty of money. Money is not my issue. I thought it sounded like a real jolly good time.”

Luckey is listed as vice president of the group on their website, though he claims he’s just a benefactor. He also posted on behalf of the group using the pseudonym ‘NimbleRichMan’ (an account that’s since been deleted), on Reddit, with a password supplied to him by the organisation’s founders.

Despite his claims that it’s just a “jolly good time”, there are hints in his Reddit posts that suggest he’s looking to make some kind of political change.“The American Revolution was funded by wealthy individuals,” NimbleRichMan wrote on Saturday, since confirmed to be Luckey by The Daily Beast.

“The same has been true of many movements for freedom in history. You can’t fight the American elite without serious firepower. They will outspend you and destroy you by any and all means.”

This is a message from @PalmerLuckey, the founder of @Oculus. pic.twitter.com/CWlAA8ugMx

Luckey reportedly worked alongsideMilo Yiannopoulos, a man best known forbeing permanently suspended from Twitter for harassment and being upset when his blue verification tick was taken away. As The Daily Beast reports, they met around the time Yiannopoulos was raising money to send white men to college, though it later transpired that the $100,000 donations made into his bank account were never distributed into the scholarship fund.

Along with Luckey, Nimble America was founded by two moderators of Reddit’s r/The_Donald, a subreddit that asksapplicants answer the questions, “Is there a difference between white nationalism and white supremacy?” and “Was 9/11 an inside job?”.

“I think these guys are pretty legit,” Luckey said. “The sums of money are so small, I don’t think they’re out to scam anybody. If they disappear with the money, I wouldn’t throw any more money at them.”