Luftrausers doesn’t easily translate from German to English, but the best fit I can find is “air clearers”. This quite nicely sums up the core of Vlambeer’s 2D dogfighter; a side-on view of a solo jet-pilot’s struggle to eliminate every single other moving object in the sky.

It’s a retro-styled arcade game, made up of barely a handful of pixels jumping around a coffee-stained cloud backdrop, and controlled by little more than just the arrow keys. But for such basic ingredients, the outcome is an incredibly satisfying romp through flak-filled skies. 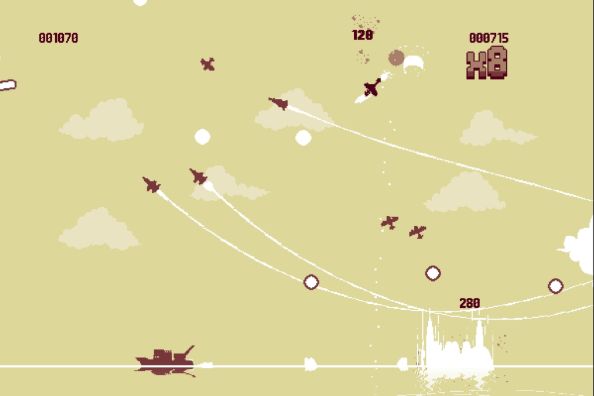 With barely a menu or introduction to get you initiated, Luftrausers starts with the pace it intends to continue with. A submarines surfaces and fires your plane out into the open skies. It is a rauser: an experimental jet that is apparently built to take on an entire enemy air force solo. It’s exceptionally effective at its job, thanks to nimble, twitchy controls that offer a remarkable sense of freedom. They’re a little tank-like, so holding down the up key propels you forward rather than up the screen, but once you get used to it it feels like the most natural way to fly.

The biggest asset of the controls is the ability to stall the engines, causing your jet to slow a little and free-fall down. This gives you a moment to take in targets, aim, and obliterate, before re-engaging thrust and blasting back up to a new vantage point. Evade, exterminate, and escape becomes a prevalent tactic.

The extermination element of such strategy is bolstered by a simple upgrades system. The rauser is modular and built of three sections, with new options unlocked most levels. The nose contains your weaponry, the body your armour, and the tail a propulsion system. With all modules unlocked the rauser offers up 125 combinations. There’s a slight dieselpunk element to the design, with options like an engine that propels you by firing bullets, nuclear armour that detonates on death, and a sustained laser beam that cuts through the sky like a lightsaber. They all offer unique ways to play, but I found that once I discovered a build that I felt comfortable with I stuck with it for most of the game. Enemies tend to die well at the hands of everything, so personal preference drives your construction rather than responding to different threats. 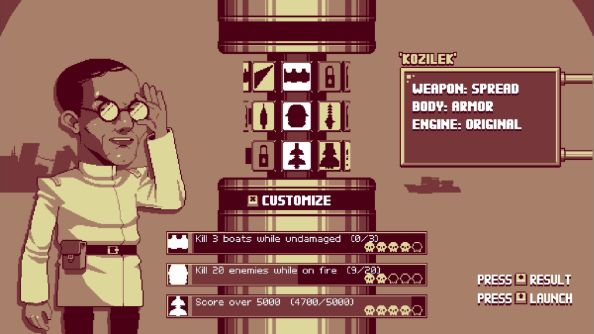 Just because there’s no rock/paper/scissors elements to fighting doesn’t make Luftrausers a game shallow on demands. Boats and ships require you to perform swift strafing runs to prevent them from filling the sky with anti-air munitions, dipping in and out of the water in quick arcs and bursts of gunfire. Most aircraft will tail you in packs, making the bullet engine rather useful and the laser an effective squad wiper, especially when you pinwheel. Jets and missiles offer a harder target, and special fighters that can literally run circles around you bring bigger challenges. Survive more than a few minutes and simply keeping the enemies at manageable levels is a true achievement.

Visual feedback for danger in Luftrauser is simple but exceptionally effective at communicating the situation. Taking damage causes smoke and debris, and a circle will surround you, shrinking tighter the closer you approach destruction. Thankfully the rauser constantly self-repairs when not firing, so taking a break from annihilation can get you out of tight spots provided you can escape the carnage.

Death isn’t the end though, thanks to a surprisingly lenient mission structure. Each level has a set amount of points that need to be achieved by killing enemy units, but death does not reset the counter. Simply replaying the mission over and over can grind the amount of points required to progress, meaning lower skilled players won’t be fated to be stuck at the early game. For ace pilots, levels can be wiped in a single life thanks to a score multiplier system that rewards chain kills, and side missions such as destroying a set amount of a specific enemies or killing so many aggressors without taking damage offer challenges that don’t interfere with the core game. There is a downside to this: by grinding your way to the score threshold you miss out on some of the truly spectacular chaos that erupts. Only true survivor pilots will get to see the incredible airships that appear as late-level bosses. 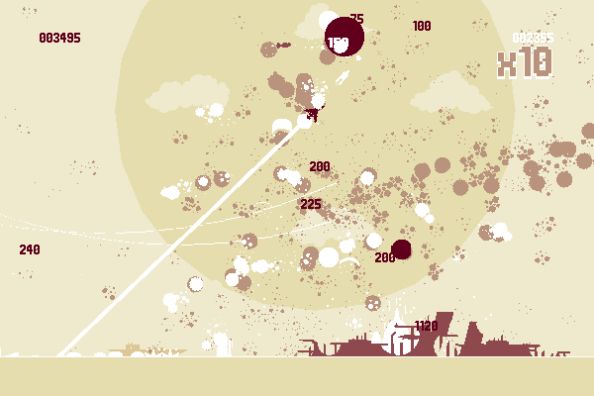 Surviving as long as you can comes with a bigger bonus than massive scores and boss battles though. Luftrauser has a phenomenal soundtrack by KOZILEK that dynamically builds through each life, full of a combination of retro arcade bleeps and an almost orchestral melody. Surviving for a couple of minutes allows the score to reach a heroic outburst of a crescendo that never fails to encourage a smile; a rousing anthem that perfectly suits the pseudo-1940s feel of the visuals. It’s also based on your rauser’s configuration, with the track being remixed for every change you make.

The mad German scientist feel wouldn’t quite be complete without a bolt loose somewhere, and Luftrausers does have a technical malfunction when it comes to framerate. It runs perfectly smooth generally, but when the screen gets notably crowded framerates can plunge, and this generally leads to death. It never feels particularly frustrating because by that point doom is often inevitable, but the stuttering frames eliminate any possibility of a narrow escape.

Simple in almost all respects, Luftrauser is one of Vlambeer’s biggest triumphs because it strips back everything in the name of exposing the fun at the centre of the game. It’s almost as if the designers were engineers of the rauser itself; reducing weight and tweaking fuel lines to ensure the most effective deliverer of death possible. The concessions to lower skilled pilots makes the bosses a bit of a non-event, but the overall result is a challenge that works for all players, and that’s a genuine achievement. Wrapped in a stylish package with darting machine silhouettes and authentic World War 2 colour-pallet, Luftrausers is really quite special.