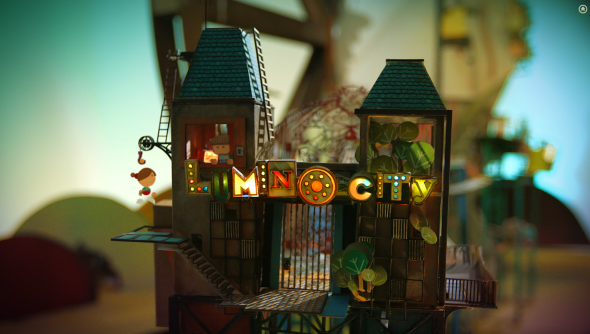 Lumino City’s lights are blinking out. The handyman, the one person who knows how its intricate systems run, has been kidnapped. Without him its generator fails, its engines falter, and its electric eel-powered Ferris wheel washing machine comes to a standstill.

Playing as his granddaughter Lumi, you must point’n’click your way across the city to find him.

Lumino City is a beautifully crafted point and click adventure. Not only in its complex, hands-on puzzles, but because it is literally a crafted city. State of Play built a massive three metre tall model of the city out of card, cloth, and clay. They then filmed your movement through the city on cameras and fed it into their game engine, treating it as a grand green screen backdrop.

Every scene has a tactile homely quality. One puzzle has you sat outside a ball of thick wool playing a banjo made out of string and balsa wood. Above you, a Ferris wheel wound with string spins, acting as a clothes dryer. 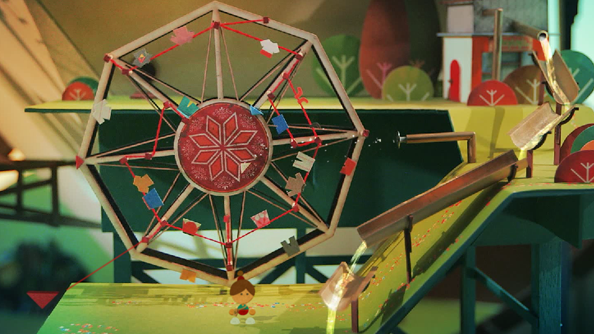 That hands-on quality extends to the puzzles, too. You’ll push pins in locks, rewire circuit boards, and puncture punch cards with binary codes to program a computer. It’s a much more involving action than point’n’clicks that see you just dragging and dropping items from your inventory.

Lumino City’s charming looks had me put it in the same box as Broken Age but the puzzles are much more challenging than Double Fine’s. Excellently so. One puzzle has you trying to decode a mathematical lock. The lock system’s made of a pyramid of three stacked, metal discs. Each disc is engraved with a ring of numbers which line up with the numbers on the other disks. You have to rotate the disks till every line of numbers totals the number on the topmost disk. 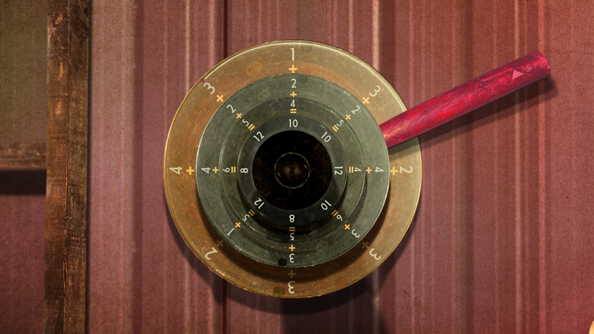 However, while solving the puzzles is hard, what you have to do is clear. In most of Lumino City’s puzzles you have everything you need for that puzzle placed in front of you. There’s little travelling between screens to collect together items and other characters besides Lumi rarely play a part in puzzle solutions.

This straightforwardness makes for really satisfying puzzles. You know what to do very quickly and that gives you the resolve to puzzle through the problem till its solved.

Except, I found, in one instance.

There’s a puzzle where you have to rewire a junction box. Each socket is marked with a symbol and you have to run a cable between the two equivalent symbols. A pentagon minus a dot is equivalent to eight lines divided by two lines. The trouble is there’s 22 holes to connect up and some of the symbols are very hard to decipher. With so many possible connections there’s no way of knowing you’re on the right track to the solution until you’ve got it all linked up correctly. Here the lack of hint system in Lumino was painfully obvious.

Instead of a hint system, when you’re stuck you can turn to your grandfather’s Handy Manual. It has step-by-step guides to every one of the game’s 34 puzzles. To discourage cheating, the manual is 1,000 pages long, filled with useless, filler diagrams. To find the right page you have to solve a simple maths problem based on elements of the puzzle – “No. of Ferris wheel posters x 111 – (6 x 6)”, for example. It’s a novel solution but the problem is that there’s no halfway point between being able to solve the puzzle yourself or having the answer given to you.

However, that was one puzzle out of 34 where the difficulty spiked to a frustrating level.

The other problem was a couple of instances where Lumino’s high depth of field shooting style means things that look blurry and in the background are actually selectable and required to solve a puzzle. 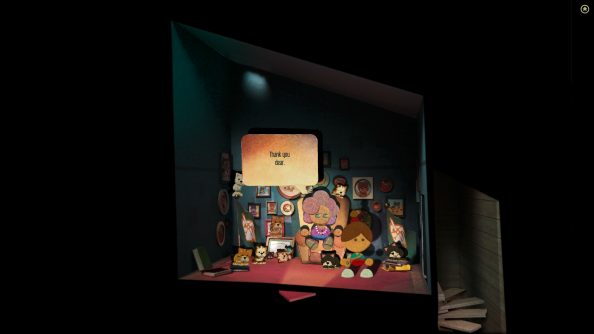 Lumino City really has only one flaw: its cracking puzzles and amazing architecture aren’t matched by a similarly memorable story. Your route to Lumi’s grandfather is a one way trip from the bottom to the top of Lumino City. It’s a winding road but not one that holds you in any place for very long.

The strange characters you meet never become more than a whimsical cut-outs with a few lines of dialogue. Shortly after you meet them you’re off to the next surreal setpiece. It gives the sense that the city simply looks lovely but the team haven’t put similar thought into the people who live in the place. In games like Broken Age, which is far weaker on the puzzle front, there’s a fascinating story that’s pulling you through the game. It lets down an otherwise excellent game.