Mad Catz is known for its Transformers-style gaming mice, with the R.A.T. series helping to define the divisive, edgy designs that flooded the market early last decade. But moving on to the B.A.T. 6+ gaming mouse, the company has taken inspiration from another pop culture icon instead – no prizes for guessing who this time around.

Yes, the company has ditched the angular approach and looked to none other than various versions of Batman’s trusty vehicle, the Batmobile, for direction with its latest gaming mouse. It’s unclear which iteration played the biggest part behind the scenes, but it’s safe to say it’s less Adam West’s era and more Tim Burton or Zack Snyder’s take on the car.

Despite its namesake, Mad Catz was also drawn to the “aggressiveness and aesthetics” of other vehicles, too, taking design cues from hypercars, spaceships, and even a starfighter’s wings for the hot-swappable side skirts.

The design might’ve changed from Mad Catz’ usual, but it hasn’t given up its identity with the B.A.T. 6+ being just as customisable as ever. Alongside the changeable side skirts that cater to a truly ambidextrous approach, gamers can also swap out the backplate, too. 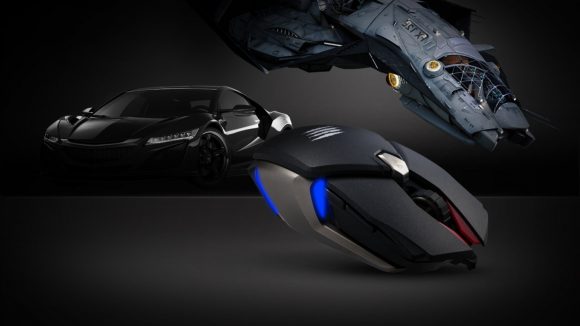 Under the hood, you’ll find a 16K DPI Pixart PMW 3389 optical sensor and Dakota mechanical switches that boast a 2ms response time. It’s also the first gaming mouse in Mad Catz’ arsenal that uses the new Cyborg Engine software, in which five personal profiles can be stored onboard so you’ll never lose your settings.

The Mad Catz B.A.T. 6+ will be available from late February, and while there’s no concern that it’ll spring arms and legs to fight the Decepticons like its sister series, there’s no guarantee it will stay put when the sun sets.