Videogames and race issues aren’t yet at ease in each other’s company; not like having a KKK member and Black Panther over for a dinner party, but more in the way that well-meaning but awkward white people feel sheepish when broaching the topic of racism with ethnic minorities.

Related: for more open-world adventures, check out the best sandbox games on PC.

Recent games have tried to tackle the subject, but lacked the maturity and writing to do it well. There’s your Mankind Divided on the one hand, with its allusions towards today’s racial tensions being about as subtle as a 12-year-old’s short story about robot slaves, then there’s This Is The Police on the other, which presents you with bizarre conundrums from your racist Mayor, such as whether or not to fire all the black people working for the police force.

Games tend to convert derogatory racist language into innocuous fictional terms like ‘clank’ in Mankind Divided, or ‘Nork’ in Homefront: The Revolution – void of any historical context, they completely fail to capture the weight behind the real-life words they’re so meekly standing in for. 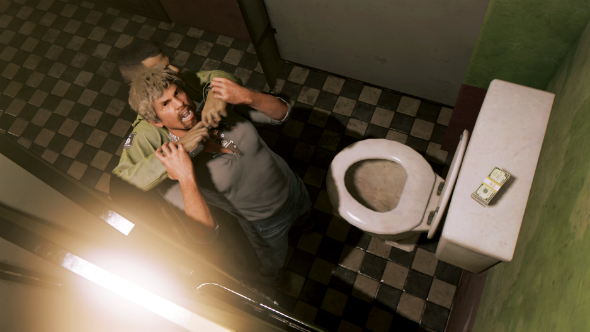 Yet when I played Mafia III – faithful to its barely fictionalised ’70s New Orleans setting as it is – there was no fanfare or contrivance when the word “nigger” was first mentioned. It’s simply saying things how indeed they once were. Where normally I’d wince at the sound of the word, in this context it simply blends into the turbulent historical setting. It works, because the game’s writers are confident in the world they’re trying to depict, rather than trying to make a statement.

My extended preview session with Mafia III covered the first few missions, followed by a bit of free-roaming time several hours into the campaign. The place in society of its protagonist, mixed-race Vietnam vet Lincoln Clay, is quickly established. When he and a white accomplice, Giorgi, pose as cops at a federal vault they plan to rob, Lincoln is treated with a mixture of casual derision and dismissal. As the three of them are walking, the cop moans to Giorgi about affirmative action towards niggers, while Lincoln follows them carrying a couple of heavy bags without saying a word. Subtle and effective, this intro says to us, ‘Welcome to the Southern States of America in the 1970s. It’s gonna be a tense ride’.

The game doesn’t constantly heckle you about how nasty racism is (it’s fair to assume we already know that), but the atmosphere of segregation will affect your interaction with the world in small, succinct ways. I’d be driving around hazy New Bordeaux, abiding by traffic laws like a good citizen (true to Mafia tradition, cops will chase you for speeding), yet the indicator representing police suspicion towards Lincoln would pop up. These little suspicion bursts rarely amounted to anything, but were enough to make me self-conscious, wary that Lincoln will never be afforded the same anonymity by the police as regular Joe Whiteguy. 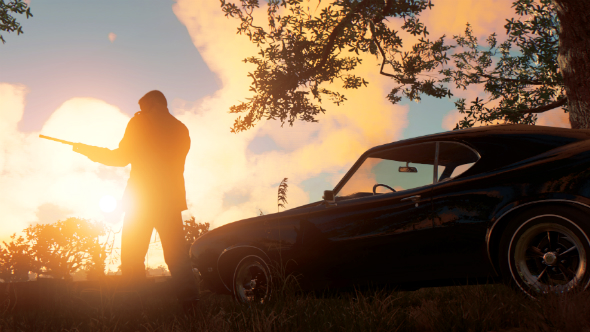 When I ask Mafia III executive producer, Andy Wilson, about whether there’s any effort to make social commentary on racism here, or if the intentions are strictly historical, he’s unequivocal. “It is entirely historical,” states Wilson. “There’s no intention to make any kind of statement about what’s happening today.”

Ever aware of the history it draws on, Mafia III presents monumental events from its time period in much the same way movies have for years. In between gameplay sequences, story events are told in flashbacks by Lincoln’s friend and black community leader, Father James. His preachy monologues are stylishly intercut with montage live-action footage of events like Vietnam and the Civil Rights movement, alongside grainy ’70s style home video clips of Lincoln and his pals, all accompanied by the gloriously countercultural music of the 1960s. During one cutscene, a couple of characters are watching footage of Robert Kennedy’s assassination; it’s an effective technique, and sells me on the idea that this game is documenting a seismic social era.

The gameplay, while not as inventive, is sound – a by-the-book cover shooter that’s equally competent at action as it is at stealth. The gun sounds are crunchy, the bloody splatters on bullet-riddled enemies are satisfying, and the near-gratuitous stealth kills that caused a bit of a stir during those early trailers feel narratively justified by the fact that Lincoln is meant to be a killing machine, inured to extreme violence by his experiences in ‘Nam. 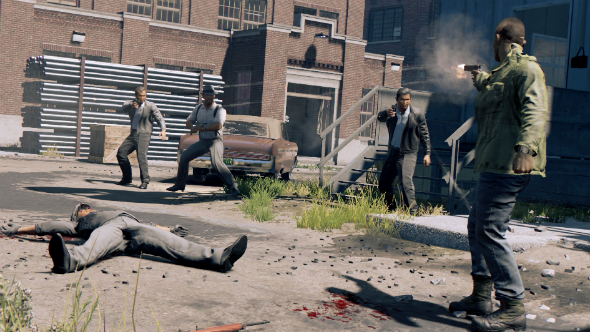 In a neat little touch, your decisions about whether to act violently or not at certain points feed into Lincoln’s later actions. Right at the beginning, I got to decide whether or not to kill a tied-up man during a robbery. Naturally, I shot the poor bastard right in the face (just to, er, test out the physics engine). A short while later, I made an unpleasantly brutal stealth kill where Lincoln smashed a man’s face repeatedly against the smouldering inside of a furnace (“he was blatantly a racist,” I kept reassuring myself).

Wilson reveals that these two kills were in fact connected, and that if I hadn’t killed the guy at the start, then I would have choked out Furnace Man rather than turning his face to mince. This isn’t some kind of good/evil character evolution, Wilson tells me, but “a few small moments where Lincoln’s actions respond to yours”. It’s almost like Lincoln’s constantly on the edge of exploding into extreme violence, and you can choose whether to feed his PTSD-induced urges or resist them.

The first several missions are excellent, establishing the well-rounded characters and story. I particularly enjoyed the amphibious assault on the Haitian gang’s shanty town out in the Bayou Swamp; the highlight was a moment of emergent gameplay madness as a gang member spotted me in the swampy waters, ran in after me for some inexplicable reason, then started drowning. As I basked in his idiocy, an alligator emerged from the murky waters and snapped him up. A timely reminder to get the hell out of that water… 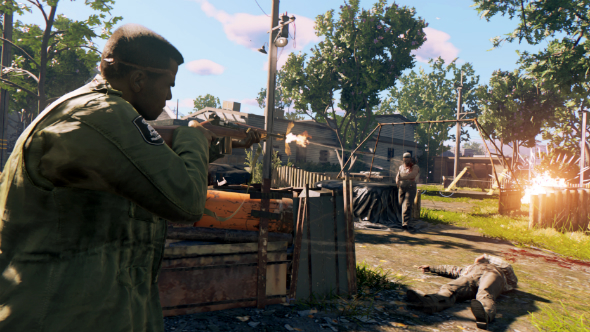 The atmosphere and lively settings go a long way to carrying the routine gameplay, but so does the incredible soundtrack, made up largely of licensed music from the ’50s to ’70s. A crucial moment in the story is fittingly punctuated by the aggression of the Rolling Stones’ Paint It Black, while stealth sequences are accompanied by a bespoke bluesy tracks. I was surprised by how much standard sequences are bolstered by the great cultural sounds of the era.

The Mafia series has always been good at funnelling its open-world setting into tight, well-designed missions. What it struggled with was keeping players entertained when let off the leash in the open world. I got to test this in Mafia III when I was thrown several hours into the campaign. In this open-world section, I decided to sabotage the operations of a KKK-like group called the Southern Union, with the ultimate aim of taking over the rackets in their territory. These reside at the fringes of the city, creeping into the trailer parks and countryside in the northwest corner of the map, and would give me an opportunity for some exploration.

The open-world missions are pretty standard stuff – kill a bunch of thugs beating on a black guy, interrogate someone by driving around dangerously with them in the passenger seat, go destroy some precious cargo. Sometimes you’ll encounter a car full of enemies cruising around their territory that you can take out. All these actions dent the income of the faction you’re attacking, and when their coffers get low enough you can take out their leader in a final mega-mission. While I’m not averse to tearing into the KKK, I felt like I’d experienced the gamut of mission types available to me within about an hour, so decided to explore the rural hinterlands and see if they held any surprises. 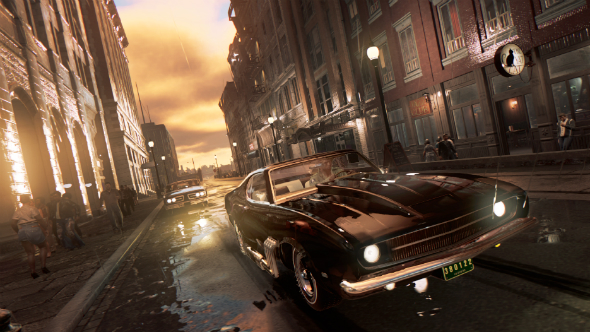 I didn’t find much in those soggy backwaters. While I managed to get my muscle car skidding up a dirt track to the national park, I found little there apart from a Playboy magazine (Mafia III’s novel answer to arbitrary collectibles). And it’s in these moments of free-roaming that I’m yet to be won over. As a presentation of the ‘70s, the game is fantastic – a sensory overload of everything that made that era distinct. But how much can you engage with the world beyond the surface? Mafia III presents its story brilliantly too, but can it keep up that early momentum into the later game?

Those questions continue to loom, but I’ve a lot of goodwill for a game that documents its controversial, fascinating subject matter with a rare degree of subtlety and maturity. If it builds on its solid foundations and pulls through on its more interesting ideas (like the underboss system, whereby you can end up at war with your own allies if you don’t see to their needs) then Mafia III could be one of the sleeper hits of 2016.