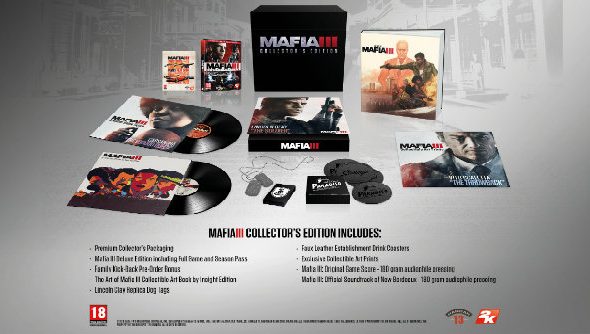 Mafia 3’s Collector’s Edition has been announced, and it comes with a decent haul, assuming you don’t mind dropping a hefty $150 on a game you might not even like.

Interested in visiting the ganglands of New Bordeaux? Check out everything we know about Mafia III.

Speeding through the French Quarter of its New Orleans-inspired New Bordeaux does look cracking, but that’s a lot of money to put down on a game you haven’t played. Maybe we’ll get more of an idea of its quality when it gets a full reveal during E3 in a few weeks.

The reason it’s so pricey might be down to that vinyl soundtrack which contains big names like The Rolling Stones, Jimi Hendrix and The Animals. The second LP holds the original game score which features rhythm and blues-inspired work from Jesse Harlin ( Force Unleashed, Secret of Monkey Island) and Jim Bonney (BioShock Infinite, Mortal Kombat).

Other than that, the rest kind of looks like throwaway fan tat, but don’t let me put you off. If you’ve got the money, why not.

You can pre-order it at all your usual retialers now.