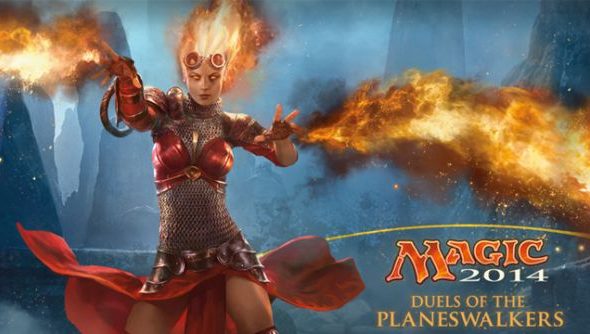 The date’s been announced. Magic 2014 – Duels of the Planeswalkers will ignite on 26 June worldwide. It includes a new campaign featuring Chandra Nalaar, a fiery planeswalker out for revenge. The slivers, a hive-mind type creature, are making a return, and are even more deadly than before. Finally, a new game mode is being introduced: Sealed Play. Just like real limited tournaments, at the start of each tournament players will open six random booster packs and construct a deck to do battle with.

And here’s a walthrough of the Sealed Play Mode:

I’ve played hundreds of hours of the previous iterations and recently got stuck into the real thing. The biggest feature by far is the new Sealed Play Mode, finally adding the sorely needed creativity behind deck building that is half the fun. The previous titles were limited to pre constructed decks with little to no customisation, turning games into predictable show and tells.

Another exciting addition is the return of slivers. These creatures share a hive mind, allowing them to compliment each other with different shared traits and abilities. In an interesting development many of the slivers have adopted a humanoid form compared to their older brethren.

Wizards will be a focus of the new campaign’s story: adding colour to the previously dull and linear campaign ladder. Players will follow Chandra Nalaar as she seeks revenge and discover the various villains trying to pull her strings.

You can pre-purchase Magic 2014 – Duels of the Planeswalkers on Steam today at £6.99 for the standard edition and £14.99 for the special edition.