Ahead of the release of Magic: The Gathering Arena’s new Core Set 2020, Wizards of the Coast is showing off some of the new entries making their way to the game. Today, we have an exclusive new card to reveal for you ahead of the new set’s reveal next month.

Colossus Hammer is, as the name suggests, an absolutely enormous hammer. The uncommon, one-mana card is an equipment artifact, allowing you to hand it to a creature that you control (as long as you can pay the equip cost of eight).

The creature wielding the Colossus Hammer will get a significant boost – thanks primarily, it would seem, to the sheer heft of the thing. Your equipped creature gains ten power and ten toughness, which seems a decent way to really finish something off – hence the “there’s only one way to be sure it’s really dead” flavour text. Unfortunately, the apparent weight of the Colossus Hammer means that while you’ll be dealing (and taking) plenty more damage, your equipped creature won’t be able to fly while wielding it.

You can take a look at Colossus Hammer for yourself in the image below. 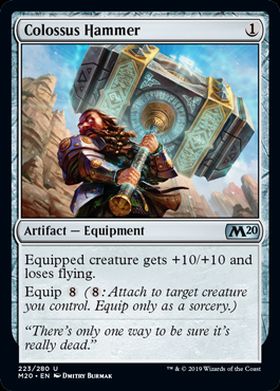 While the cost of the card itself is relatively low, that equip cost is likely to hamper you a little if you’re not prepared. That said, the stats you’ll gain from equipping it seem worth the payment, just as long as you’re not grounding a flying unit by using it.

Core Set 2020 will be the last set to release before cards from the Ixalan, Rivals of Ixalan, Dominaria, and Core 2019 sets rotate out of Standard play. The new set arrives pretty soon, with all 280 cards due to release digitally on July 2, with an official physical release set for July 12..