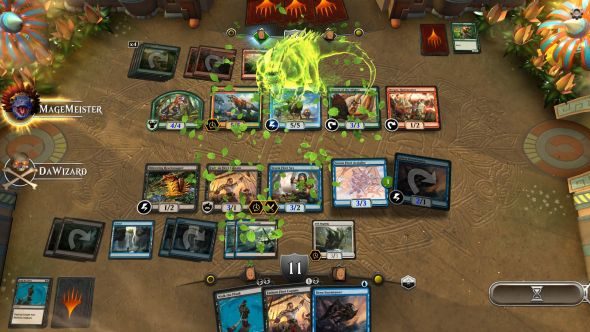 Digital versions of Magic: The Gathering have always filled an odd spot, be it the direct translation that is Magic Online or the more casual option presented by Duels of the Planeswalkers until recent times. They’re trying to co-opt but not compete with the physical edition of their own product. A big part of achieving that is release timing, with the real-world version previously always having priority. For MTG Arena, however, the plan is to get the two versions as close to simultaneous as possible.

Familiarise yourself with the Magic: The Gathering Arena announcement stream.

“Our goal is to definitely have card sets released day and date,” Steve Sunu says, communications manager at Wizards of the Coast. “So when you see a release in the physical world you should be able to see it in MTG Arena. You’ve seen a little bit of our experimentation with this with Magic Online so far where [card releases] sometimes even earlier than day and date release.”

Magic Online has had a tricky relationship with this over the years. Several high-profile leaks of cards in the ‘00s happened because of getting them into Magic Online’s system in time for release. Like any games company, the control of information around announcements is very important to building excitement for Wizards of the Coast.

There were also worries that being able to play the cards at home immediately would damage paper sales and lower attendance at highly lucrative release events. With attendance at those events doing nothing but going up in recent years, it looks like those worries have been laid to rest.

“We have a track record of making sure that our product can launch on many different platforms at the same time,” continues Sunu. “Right now we’re just concentrating on making the gameplay great and a lot more information about [this] will be coming soon. But in terms of our goals, yeah, absolutely, it’s the goal to make sure those card sets come out day and date with their physical counterparts.”