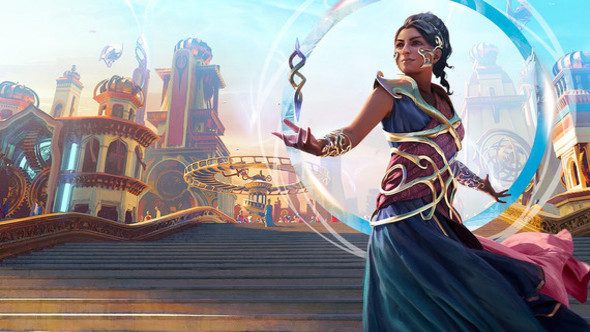 Imagine exploring Ravnica or Dominaria… online. Magic: the Gathering has been a solid part of the tabletop world for years, but would you play it as an MMO? The aptly named Cryptic Studios has been developing a new game based off a ‘Critically acclaimed IP’, and our bets are on MTG. Here’s why.

Find out which MMO is right for you with our comprehensive list of the very best on PC.

Earlier this year MTG owners Hasbro were throwing people aboard the hype train, claiming they were ‘reimagining’ digital versions of popular games – and the team responsible for it includes Cryptic Studios and the Magic Online folk. They seem pretty keen to be evolving their work.

Not only that, but Cryptic has posted a job advert for an Art Director to work on an ‘exciting, well-known fantasy IP’. Since they’ve already done away with D&D by making Neverwinter, surely MTG is next?

The internet’s general consensus is also on MTG. We’re hoping that it won’t be pure garbage or wildly expensive to play, but this MMO business is a bit hit-and-miss. A fully-realised multiverse with every plane and every card digitised seems like a stretch.

Even if it doesn’t hit the mark, the size of the brand could make it extremely popular among MTG, D&D and MMO enthusiasts alike. It depends on how far developers would be allowed to deviate from the current plot of the card game. The multiverse is so huge, they may have to pace themselves or release the world and story bit by bit – after all, a single set of cards has enough concept art for a fleshed-out game. If they’re firmly loyal to the lore but lose the plot, it could have a lot of potential.