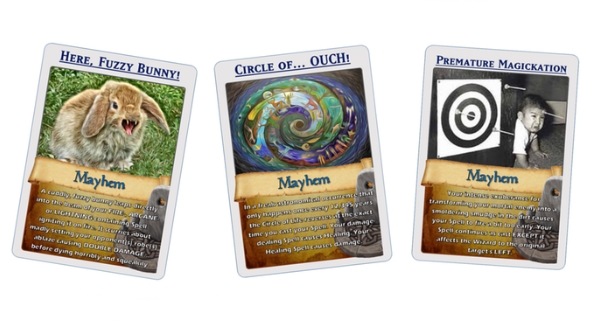 So you know Magicka, the absurd RPG from Paradox where you combine elements to make explosive spells? Well it’s going to be a real, physical card game. A Kickstarter opened yesterday and has already soared past its modest goal.

Magicka is one of our picks for the best co-op games on PC.

The big news though is this isn’t actually a Paradox product. Instead, it’s the idea of a ten year old child. Thankfully Paradox loved the concept so much they’ve let young Ethan Erickson go ahead with the idea, fully-licensed.

Magicka Mayhem is guaranteed to make you ‘pee your pants with laughter’, which is naturally what we’re all looking for in a party game. The game adopts the PC version’s idea of combining elements by demanding players follow spell ‘recipes’, combining cards together to create an effect.

The Kickstarter page goes on to explain the game’s USP: “Your Spell could get MAYHEM-ified! Mayhem cards can cause… Your Spell to Blow Up in Your Face… Save Your Butt from Disaster… or Make You Pee Your Pants with Laughter!”

Ethan announced the Kickstarter at Paradox’s GDC event yesterday, and within hours the small $2,500 goal was smashed. There’s still 29 days left, so if you fancy pitching in just to secure your deck, you’ve got plenty of time. $25 will get you the physicals, or a print-your-own-set can be purchased for just a $1 donation.