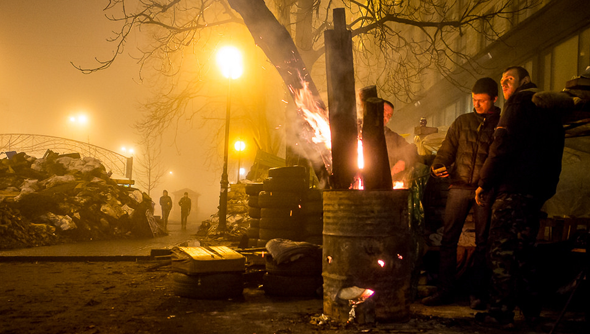 “The centre of Kiev was burning as the finals took place.”

I’m sat at the bar in Kiev’s CyberArena, a dark hall filled with rows and rows of computers. There’s more than a hundred young men, most in their late teens, playing World of Tanks, Dota 2, and Counter-Strike. A few months before this hall was empty. The building shut down in January. The city wasn’t safe.

I’m with Vitalli ‘V1lat’ Volochai, a prominent Russian-speaking eSports caster, and Iegven Dubravin, manager of Na’vi’s Dota 2 team. They’re trying to explain how they ran their business whilst their country was embroiled in a revolution.

“It exploded on the dates of the tournament,” says Iegven.

“We had to hire an armoured vehicle with [bodyguards] and they were riding from here to the airport with teams because they wanted to stay safe.” Vitalli says.

It has been a wild, wild year for Ukraine’s brilliant PC developers and community.

Ukraine has been pumping out great PC games for years. From its bleak landscape has emerged the Stalker series, the Metro series, Cossacks, and more recently World of Warplanes.

But over the past year it’s seen massive political upheaval, with vast protests within the capital, Kiev’s, central square. In February after government snipers shot and killed more than 80 protesters, its president, Viktor Yanukovych, fled the country. Crimea, a region in south Ukraine, separated from the rest of the country and became occupied Russian territory.

I wanted to discover what it was like for the PC gaming community, living through such dramatic times. I flew out to Kiev to meet with developers and discover how the country has changed in the past year, finding what life was like before, during, and after the protests.

It all starts with education. And Ukraine’s excellent college courses.

Many of the developers produced by Ukrainian universities became contractors, working for companies outside of the country, either porting games or creating assets for other studios.

But eventually, a critical mass of bright young developers led to mega-studios, living and working within Kiev.

“The biggest outsourcer, Persha Studia, was bought by Wargaming,” says Sergey. There are now more people working for Wargaming based in Ukraine than in Russia, they’re in charge of developing World of Warplanes. Also “Ubisoft has an office here, Crytek has a development office here, and while Ubisoft has more to do with PC porting stuff, they made the PC port for Assassin’s Creed 4, Crytek Kiev made Warface.”

Homegrown studios are doing well, too. 4A Games and Vostok Games, respectively the makers of Metro and Survarium are based in the city. And, before it collapsed, GSC Game World, creators of Cossacks and Stalker, set up shop in an abandoned warehouse.

For all of Ukraine’s homegrown successes, there was always a weight around any entrepreneurial activity: the Ukrainian government’s rampant corruption.

“His residence, Pushcha-Vodytsia, is open to visitors,” Sergey continues. “My sister’s been two or three times already. She said you cannot believe how they lived, it’s a palace. A golden loaf of bread, a golden toilet, a golden sink. It’s unbelievable.”

Golden bread loaf allegedly found in Yanukovych residence. Not sure what that signifies. MT “@Uberkatze: pic.twitter.com/gQhitKsA5k”

Yanukovych’s palatial home included a private zoo and cellar stocked with personalised vodka bottles. When he fled, he loaded trucks with cash and valuables and sent them out of the country.

#Yanukovych brand vodka – wonder what the heck he was really drinking all this time? — #Ukraine #Mezhyhirya pic.twitter.com/WGq1Odglj7

Yanokovych’s greed directly impacted businesses with vast tax rises. “They’re a joke,” Maxym Hryniv from Mokus Games tells me. “We have 13% tax on income for regular people but we have a lot of hidden taxes. If you collate everything it will be like more than 50%. It’s too much. It’s a huge number. The government wants half of your earned money.”

Developers came up with elaborate schemes to avoid paying Yanokavych’s oppressive taxes. “For example, if you work in the IT sector, most people don’t just create a company and hire people,” Maxym tells me. “For each worker they create another company and register everyone as a private proprietor. If you have a big company, two hundred workers, on paper it looks like you have 201 companies. Each company has a separate contract with each other.”

It might keep the costs down, but at any time, the schemes can be outlawed. “The place that you work today can be banned tomorrow,” explains Maxym, “and you will have to find something new, or you have to close, or you have to move your company to another country.”

Despite their complexity, Sergey believes these tax loopholes are one of the reasons the games industry has thrived in Ukraine. “If you work by yourself you can have fixed tax which is nothing. I was employed by parent company Nival, not local Nival, I was legally working for Nival in Moscow and I was employed as a private contractor. As a private contractor you pay from 5 to 10% tax. In Amsterdam you have to pay 42% tax. In Malta, where 4A are moving, it’s 25-29% tax.”

However, while studios may open in Ukraine, developers find it very hard to keep hold of their staff.

“If you’re educated and you work for a local company you can get $2,000 or $3,000 a month after taxes, which is really good. Ukraine is really cheap living,” Sergey says. “But when you get to middle level in your team and you’re raised to $5,000 you say ‘Ok, I can get $5,000 here or I can move to Canada and get $10,000 there and live in a safer country.’ That’s a problem, a brain drain. You have a young staff and some senior staff left because they have very good salaries but the middle is moving outside.”

That same cost of living makes Ukraine an attractive place to run an eSports team and tournament. Na’Vi, one of the most successful eSports brands in the world, started life in Ukraine. Meanwhile, Starladder tournaments are some of the largest in the world, offering prize pots of almost $200,000.

“For the last two years, everyone in the world, they love to come to Ukraine because it’s easy to organise a tournament here,” Vitalli tells me, explaining the popularity of the tournaments commentates for. “Nobody needs visa, nobody needs anything to come, everything is cheap.”

I can attest to that. A bottle of vodka was cheaper than the bag I bought to carry it in.

“Flights are cheap, food is cheap, hotels are cheap,” Vitalli continues. “From Asia, from Europe, from USA, it was not a problem for [players].”

The old government even took notice of the success of the scene. “They told everyone that they are supporting eSports, that they are supporting gaming. Two years ago, the Na’vi Counter-Strike team had a meeting with the Ukrainian Prime Minister, Mykola Azarov.” He gave the team gifts and had his photo taken with them and told them “‘You are the future of this country.’” 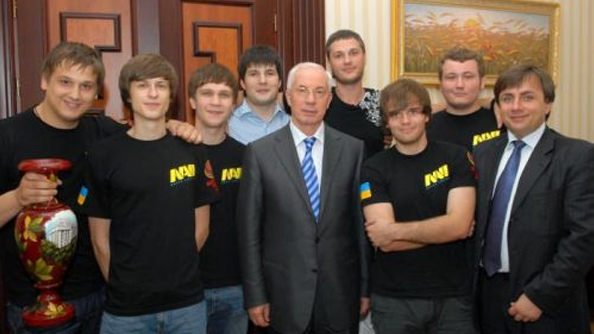 But it all came to nothing.

“He didn’t understand what he was talking about,” Vitalli sighs. “We tried to get some government support for Star Ladder. For instance, visa support for Chinese guys. They needed a visa for Kiev. We went to Ukrainian Ministry of Sports and we asked them for help. We were declined because eSports doesn’t have a federation in Ukraine, it’s why no one can get money or business support. It was all just talk. No real deals, no real money.”

Ukrainian developers faced a complex problem. On the one hand, its universities, cheap living costs, and open borders encouraged a very active games industry. On the other the government at its heart stifled development through criminal corruption and hefty taxes, lowering the standard of living and fostering an environment where game developers would emigrate.

But that activity came under threat: as Ukraine’s political situation began to deteriorate with Yanukovych’s election in 2010. Yanukovych had a criminal past. In his youth, before becoming a politician, Yanukovych was twice sentenced on charges of assault and once for robbery. Then, in 2005, he was charged with fraud. The case was dropped a year later due to a lack of evidence. As he came to power, he seemed to turn a blind eye to Ukranian gangs. The crime rate dramatically increased, conviction rates dropped, and discontent spread across the country.

Ilya Tolmachev, a developer at Flying Cafe for Semianimals takes up the story.

“The only thing that kept people away from going out to the streets was his promising to get Ukraine towards Europe. This was the only thing. This promise was a lie. He turned drastically towards the side of Russia.”

In part two: meet the PC game developers who risked their lives in the centre of Ukraine’s Maidan protests.