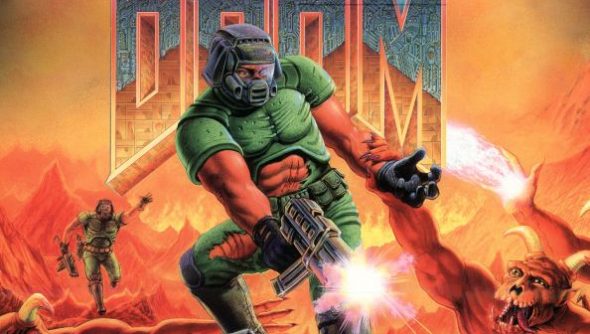 Things you must remember about Doom; its predecessor, Wolfenstein 3D, the first true FPS, sold a vast number of copies for the time – 100,000 by the end of 1993. A year and a half after Wolfenstein 3D’s May, 1992 release, Doom sold a million straight out of the door, with a further nine million playing the free shareware version.

How did id, a four man team,manage this in a development window of less than one year?

A substantial chunk of the Doom design derives from its predecessor Wolfenstein 3D. But even as the team were working on Spear of Destiny, the underplayed prequel to Wolfenstein 3D,the far superior Doom engine was taking shape.

Asthe rest of the team – programmer-designer John Romero, artist Adrian Carmack (no relation) and designer Tom Hall – beavered awayon Spear of Destiny, programmer John Carmack was starting to experiment with engine mods for Shadowcaster. Shadowcaster was,a gothic FPS/RPG from Raven Software that played like a first person Altered Beast. It ran at half the speed of Wolfenstein 3D, but added new technology: sloped floors, diminished lighting and walls of varied heights. Making new engines is the sort of thing Carmack does in his spare time – he’s the engine programmer’s Chuck Norris.He spent the latter half of 1992 conducting engine experiments before arriving, that December, atthe architecture id would use for Doom.

His resulting engine absolutely flew; it was faster and smoother than anything on the market. The reason; Carmack took as many shortcuts as he could afford. While other developers had built true 3D worlds (the Ultima Underworld games being a notable forerunner), Carmack concentrated on speed. Doom levels are 2D maps that project upwards to form 3D structures.

Because of this design, players can play the game from the map mode (if they like a challenge). Zoom in close enough and you can even see individual rockets flying around the levels. The scale, variety of detail and speed of the game were the most important elements – Carmack even dropped a hi-color version because at 640 by 480“it would have run at a pleasant 3 frames a second on the available hardware.” The compromises didn’t matter: what mattered was that Carmack had created an engine that felt like it was from the future.

Having taken a short break in Disneyworld, the rest of the team had finished up work on Spear of Destiny in September 1992. Id also moved into a new headquarters that November, “the black cube” in Mesquite, TX.20th Century Fox had briefly approached id about the possibility of making an Aliens shooters, but that idea ultimately proved a nonstarter. Nobody at id wanted to make a game where they would have to subject every decision to the approval of a major film studio. Another possibility suggested itself whenJohn Carmack remarked thatit would be great if their next game featured demons.

Tom Hall ran with the idea. While the rest of the team laid the technical groundwork for their next game, he created a Doom Bible. It was a new design document centering on the story offour characters fighting their way to hell and back over six episodes. (Co-op was originally at the heart of Doom and an early beta of Tom Hall’s level – which became The Spawning Vats [e2m7] -has the starting room with the four marines around a card table when the aliens attack.)He created example levels, carefully researched from real military bases, and a hub system so players could revisit their past victories. John Carmack said no. “Story in a game is like story in a porn movie,” he said. “It’s expected to be there, but it’s not important.” Meanwhile, the other team members found Hall’s levels dreary. Hall, meanwhile, was becoming unhappy with Doom. It was a dark game and hugely violent, and that was not the kind of game Hall liked to design. It was his design bible, but not his game. Hequit midway through 1993, but many of his ideas from the Doom Bible were integrated into the game – and many more appeared in Hall’s later games: Rise of the Triad and Terminal Velocity.

Following the departure of Hall, the Id team took a long look at what they had created so far. “There was a point probably around June of 1993 where we re-assessed what your objective was supposed to be and we decided to boil the whole concept down to: kill everything and get out alive.” said Romero. They took out scores and lives, as well as turning most of the plot items in the game – for example, the Heart of Lothar – into keycards. They dropped a slew of weapons – the knife, bayonet, machine gun, Unmaker and Dark Claw all vanished after the Alpha – and rejigged the BFG away from a plasma shotgun into something that could damage many more enemies.

Romero’s level design style – deliberately abstract but vivid – was chosen instead of Hall’s. With four months to go, Dave Taylor andSandy Petersen were hired to complete and jazz up Tom Hall’s sprawling ‘life-like’ levels that appeared in the beta versions, as well as write a third episode almost from scratch. Petersen built the majority of the levels for the game – 19 levels in total, many featuring large central areas the player must return to. The use of open-ceilinged areas, lighting, stairs, bridges and other uses of the games ‘z-axis’ (height, to you and me) enabled the designers to create much more memorable locations that were harder to get lost in. Windows that opened to other areas you could access later in a level, and vital items positioned just out of reach, tantalised players and rewarded them with replay value. With the engine and levels being worked on, the team needed enemies. The art team had expanded to includeKevin Cloud in addition to Adrian Carmack.The weapons were either modelled or based on plastic guns bought from Toys R Us (ironically proving kids were violent well before Doom.) Then they were imported, coloured and animated using a John Carmack bespoke tool called the “Fuzzy Pumper Palette Shop”.

Enemies needed sound. Again id turned to Bobby Prince, their composer for Commander Keen and Wolf 3D. Prince first created a mix of heavy metal and ambient music for the levels, at Romero’s direction. The barks came from the Sound Ideas Series 6000, which came with a library of sound effects that id put into the game.

One of Hall’s remaining contributions was naming the WAD file; standing for ‘Where’s All the Data?’, the WAD contained all of the data used in the game: graphics, sound, levels, and everything else. Perhaps more importantly, id’s WAD file was in plain view andunencrypted,enabling amateur game designers to make their own WAD files to run in Doom. In opening their doors to custom content, they completely transformed the relationship between a company and their audience, and many famous amateur level designers and programmers used the tools to make the transition from bedroom to office.

Although id released the source code for the doom engine years ago, resulting in such re-builds as zDoom and Skulltag, they maintain copyright of the WAD files, meaning an original, paid-for copy of Doom is necessary to run the original levels.

There were some huge gameplay innovations in Doom: enemies that fight each other, a large variety of weapons and power-ups, par times for levels (based on Romero’s inhuman speedrunning abilities, with thirty seconds added for padding) and so on. Most importantly, using Carmack’s engine and the team’s rapid level design iteration, they’d created and releasedthis ground-breaking game in just oneyear.

Some elements were lost in that rush to a December 1993release– famously, the initial press release promised persistent bullet holes and visible monster damage. Carmack is unapologetic. “You never, ever run out of things to implement… at some point , you have to make the judgement call that the time lost by working longer is more important than the additional things you could bring to the game. I think we called it pretty good with Doom.”