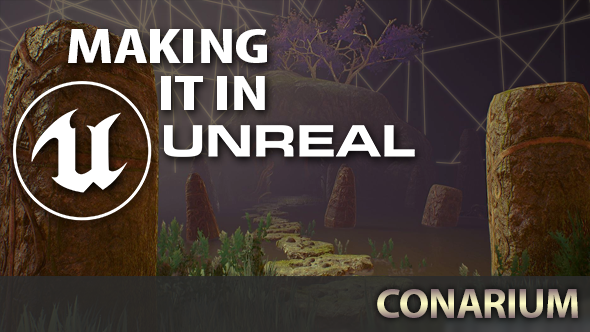 Conarium is out today on Steam. Here’s our original look at this journey through unnatural terrors.

If the leader of your academic expedition is called Dr Faust, you should know it’s probably not going to end well. It certainly doesn’t in Conarium, a first-person horror game inspired by HP Lovecraft’s At the Mountains of Madness.

After attempting to pass beyond the limits of human consciousness, the player wakes alone in an Antarctic base, with strange and sinister memories. From there, it’s a matter of exploring the base, studying its secrets, and passing through to alternate realities – all while avoiding the macabre locals.

Three developers in Istanbul have committed themselves to the task of translating Lovecraft’s atmosphere of ancient malevolence and existential horror into Conarium – without resorting to octopus imagery. Here’s how they got on.

A splash of colour 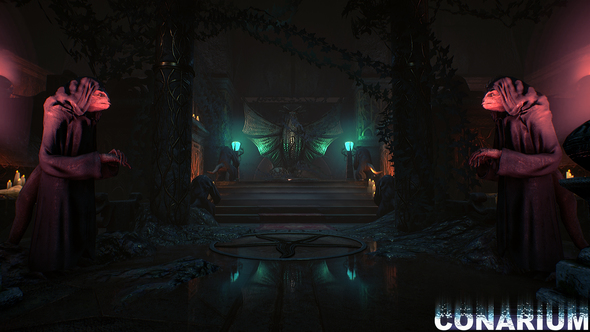 Horror games have a reputation for mostly sticking to a two-tone palette of white light and pitch black, with the occasional flash of red if something’s gone really wrong. Conarium, by contrast, is stuffed with vibrant colour – turquoise lamps that speak of the sea, and lilac trees that suggest nature is odder than you’d previously imagined.

“We decided we could only use an engine with physical-based shading because we want to make a really immersive, atmospheric game,” recalls developer Galip Kartoğlu. “Our old in-house engine was not capable of doing that.”

Unreal 4’s physically-based shading algorithms approximate the real-life effect of light as it bounces off the materials around it – for instance, the mirror-like specular reflection on a marble floor. The advantage to developers is that it’s predictable and requires a minimum of tweaking.

Zoetrope are employing the engine’s dynamic lighting in an unusual way, however. They’re not looking to mimic real-life so much as noirish horror – which is why they’ve stuck to the principles of low-key lighting while crafting their Lovecraftian environments. 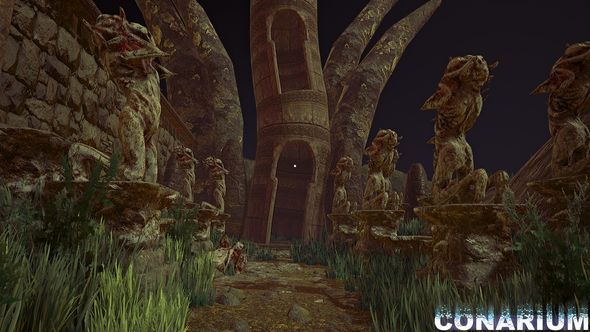 “In low-key lighting there’s a lot of difference between the dark and lit areas,” Kartoğlu explains. “Because you are just using a main light, and the fill lights are not very powerful.”

In photography and cinema, fill lights are normally used to reduce the contrast of a scene, so that shadows appear as they would in normal light. But low-key lighting does away with them, relying almost wholly on one point of illumination. The shadows it throws are deep and dark, and instantly dramatic – it’s the classic effect you associate with film noir.

In Conarium, the fill lights that are there are unusually colourful – flooding its alternate worlds with eerie character.

“It will actually look very dark and also very vivid at the same time,” says Kartoğlu. 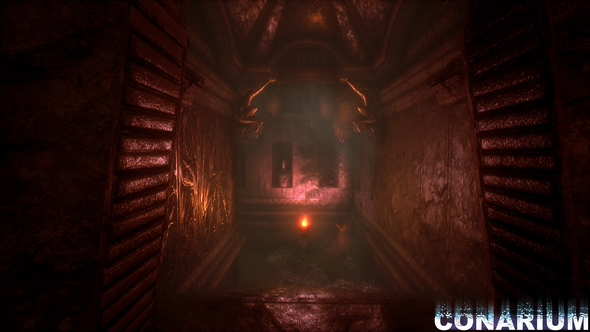 On occasion, in Conarium, the player will need to break down stone walls using an axe. Don’t ask why: this is a game that’ll keep its mysteries until launch day.

It’s notable because destructible terrain is a bit of an undertaking in a game that’s not completely built around it in the way that, say, Red Faction: Guerilla is. But it’s an undertaking Zoetrope voluntarily took on, eschewing the option of pre-recorded animations.

“In games generally you hit a wall and you watch it break down,” notes Kartoğlu. “We didn’t want to do that.”

Instead, when the player swings their axe against one of these walls in Conarium, it breaks down into its constituent parts.

“But this has some problems,” Kartoğlu admits. “Like debris obstructing the player’s movement.”

In testing, Zoetrope found that players could become trapped by the chunks of wall they’d brought down around themselves. So they’ve had to develop a custom system that recognises which parts of the wall mesh have broken away from the whole. 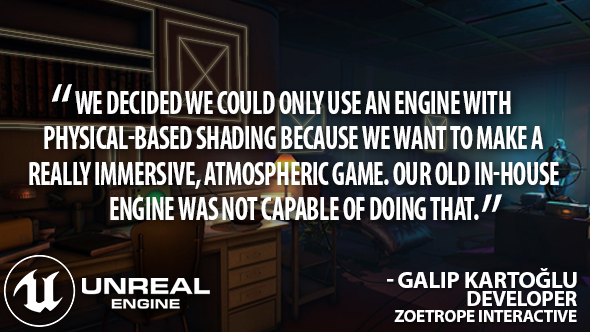 Once the game knows that, it’s able to turn off collision in those boulders that hit the floor, preventing them from blocking the player’s way.

That success led to spline meshes that block the player’s path. Unreal 4’s spline tool allows a mesh to conform to the terrain around it – in the way a dirt path follows the curve of a hill or, in this case, the way an ivy-like plant grows to obstruct a hallway in a long-abandoned place.

“You can actually hit the plant with the axe and it reacts,” explains Kartoğlu, “and then opens the way for you. They are not just stuck in cardboard.”

It’s easy to imagine that much of that groundwork could apply to otherworldly tentacles – but Zoetrope warn it’s not that sort of Lovecraft game.

“I hate to say we didn’t focus on tentacles,” laughs Kartoğlu. “We want to be respectful for his writing and style of atmosphere. We are idealistic about that.”

In this sponsored series, we’re looking at how game developers are taking advantage of Unreal Engine 4 to create a new generation of PC games. With thanks to Epic Games and Zoetrope.