Separated from her parents, stripped of her abilities and cast adrift in space, the young goddess Divine is going through some tough stuff. How fortunate, then, that she lands on a planet that turns out to be a magnified reflection of her subconscious – a place where she can work through her feelings of rage and fear, and harness the power of possession on the side.

Divine’s circumstances – the particulars of which are obscured to preserve Yanim Studio’s narrative – are unique, but her plight isn’t. At its fluttering heart, Red Goddess is an exploratory platformer about the trials of teenhood.

“Red Goddess is a psychological game,” said Yanim Studio PR Maria Pilar. “Being young is difficult in real life, so we wanted to translate it to a fantasy world. We wanted Divine to be a goddess, but with the same problems as normal young people.”

Red Goddess doesn’t concern hair suddenly growing in new places – but like all teens, Divine is going through a transitional period. Her biggest worry is identity; is a goddess missing her powers still a goddess?

“She’s alone,” said Pilar. “She’s confused. She doesn’t understand what has happened. She’s looking for something, but she doesn’t know what she’s going to find. It’s a mixed feeling.” 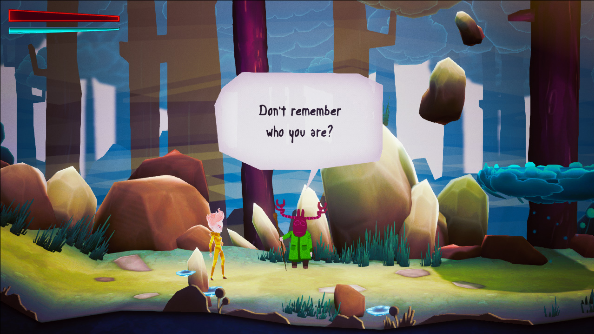 That mixture is expressed through the twin characters of Fear and Rage. Spanish developers Yanim have a history in animation and visual effects, and it shows: for Rage, they’ve drawn a hunched, fiery figure with a fixed grin of malicious glee; and for Fear, an icy-blue counterpoint with two white globes for eyes. The latter’s open-mouthed despair is reminiscent of the masks of Greek tragedy.

Red Goddess’ nonlinear, side-scrolling world also evokes Metroid – asking players to engage with a mixture of platforming and action, and unlocking powers over time. But its other muses are far more contemporary: you’ll recognise Devil May Cry’s requirement for combo-memorisation – and there’s a touch of Guacamelee in the way Divine hangs in the air when completing a move.

When creative director Yannick Puig mentions Double Fine’s The Cave, the link is less apparent. But like Ron Gilbert’s sinister sojourn through human nature, Red Goddess features an untrustworthy narrator. The planet has a voice, and it wants you dead. 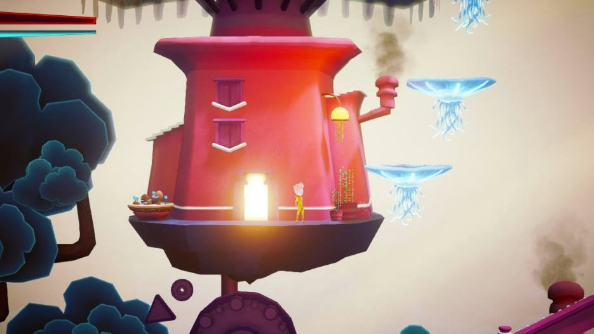 The mind-meddling extends beyond the lore to meta-interference on a par with Metal Gear. The narrator might present false tutorials, or advise the player to use the wrong button in order to accelerate their demise.

“You don’t know if the narrator is telling the truth, or if it’s a trap to kill the player,” said Puig.

In her diminutive teen guise, Divine can lob fireballs at foes which, if they connect, allow remote control. Steer your new avatar into a crowd of enemies and you can blow them up for AOE damage.

“It’s a mechanic that’s changed a lot during development,” said Puig. “We’ve tried to make it easy and fast.”

For the player, the difficulty comes in deciding not only when to swap between Rage and Fear – but when to forego both for Divine’s more vulnerable form. Combos carried out in the goddess’ combat-ready forms boost mana, represented by small squares, which in turn fuel Divine’s more godlike abilities. 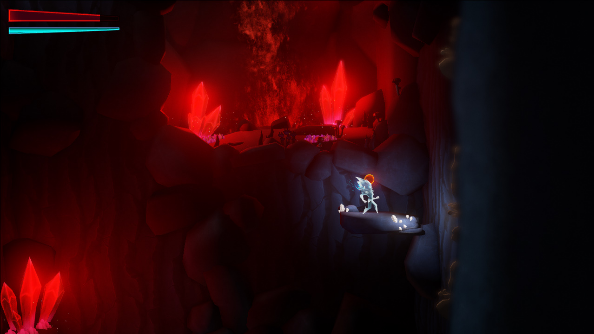 Yanim first developed these interdependent mechanics in UDK, and have since upscaled to Unreal Engine 4.

“We are very, very happy with the engine, because there are lots of graphics possibilities with features like Blueprint,” said Puig. “You can make all the game with Blueprints, more or less.”

Blueprint is a simplified visual scripting tool which Yanim’s sole artist has found particularly useful – enabling them to get on with their work without bothering the programmers.

“The graphical features of Unreal are very interesting,” said Puig. “The particles are easy to use and very powerful.”

Yanim are “very happy” with the results, seen in Red Goddess’ glowing green buttons and luminous blue mushrooms. The team had early concerns about whether they’d need to tone down some of the PC’s more demanding aesthetic features to meet specs on PS4 – but as it turns out, it’s “all working very well”.

Level streaming was a technical challenge too, in an open world that allows the player to change direction at any time. But Yanim overcame it. That’s been a theme working on a game that, after an overfunded Kickstarter campaign, turned out much more ambitious than originally planned.

“It’s our first game,” pointed out Puig. “We’re trying to make it as polished as we can.”

Like Divine, Yanim have been through a transitional phase – fighting back bugs to build themselves an identity. And now, finally, they’re happy.

“Now we have eight hours of gameplay, so it’s okay,” said Puig. “I’m very proud of my team.”

In this sponsored series, we’re looking at how game developers are taking advantage of Unreal Engine 4 to create a new generation of PC games. With thanks to Epic Games and Yanim Studio.