As my plucky yet oddly interchangeable astronaut plants the ESA’s flag tall and proud on the moon’s surface, I can’t help but afford myself a smile. This is cool, and after a lot of hard work and a tense series of challenges to get my people to and from our celestial neighbour, I feel a real sense of achievement.

I’m also very aware of how hard it can be to capture the magic and wonder of space exploration. Mars Horizon, a turn-based management game about running a space programme and leading humanity to the stars, tries to strike a delicate balance between accessibility and visual splendour; and you can tell it’s having to work to do justice to both.

When talking about developer Auroch Digital’s own take on space exploration, it’s impossible to ignore the elephant on the launch pad, Kerbal Space Program. The comparison is inevitable because there aren’t many games that share their premise: space exploration, as defined by gritty hard science and engineering rather than the space fantasy of a Mass Effect.

It’s also a harsh and unfair one: KSP is brilliant, but Mars Horizon takes a fundamentally different and more accessible approach to Squad’s charming but ultimately serious space simulation. This game has more in common with 2014’s Buzz Aldrin’s Space Program Manager and is definitely a superior take on the premise compared to that, but it does come up short next to KSP in certain respects. 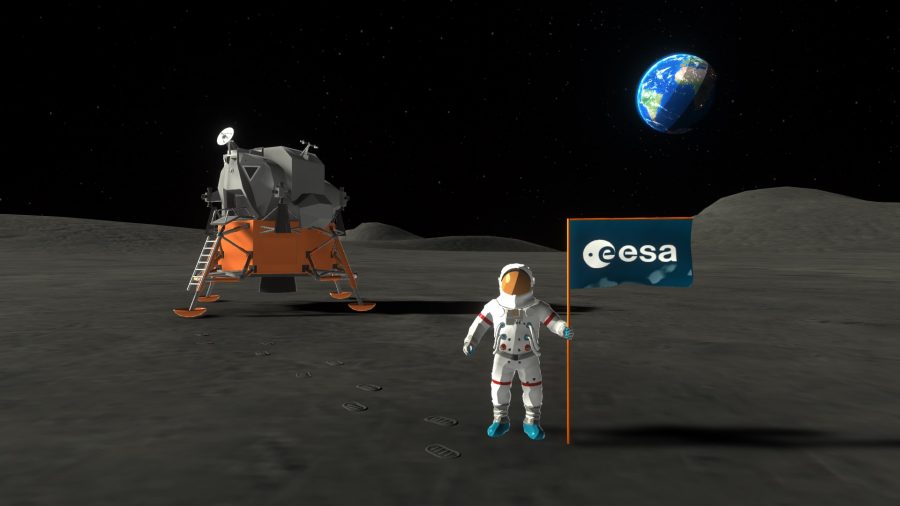 You begin your journey at the dawn of the space race, choosing from a handful of national agencies: America, the USSR/Russian Federation, Japan, China, and the European Space Agency. Each has their own traits that will affect how a game with them will play out, but you can also create your own custom faction.

Mars Horizon is a pretty game, and a lot of attention has been spent giving you as much to look at as possible

From there, Mars Horizon tasks you with expanding your space program by balancing several different aspects. You need to go on missions, and to do that you need to earn money, generate science, and make people like you. Going on missions will allow you to generate large amounts of science (and/or support) which is needed to research new tech. Generating support will allow you to progress up the funding tiers to earn more money, which means you can afford to go on more missions.

Mars Horizon has two types of missions: milestones and requests. Your tech efforts will need to be spread across researching new milestone mission types and the payloads they require, but also rockets to get you out to Earth’s orbit, the inner planets, and beyond. There is a base building mini-game that’s connected to the third research arm, which is base options. It’s honestly a bit of a distraction and a needless money sink, but like KSP’s career mode it’s mainly a way to gate your progress. 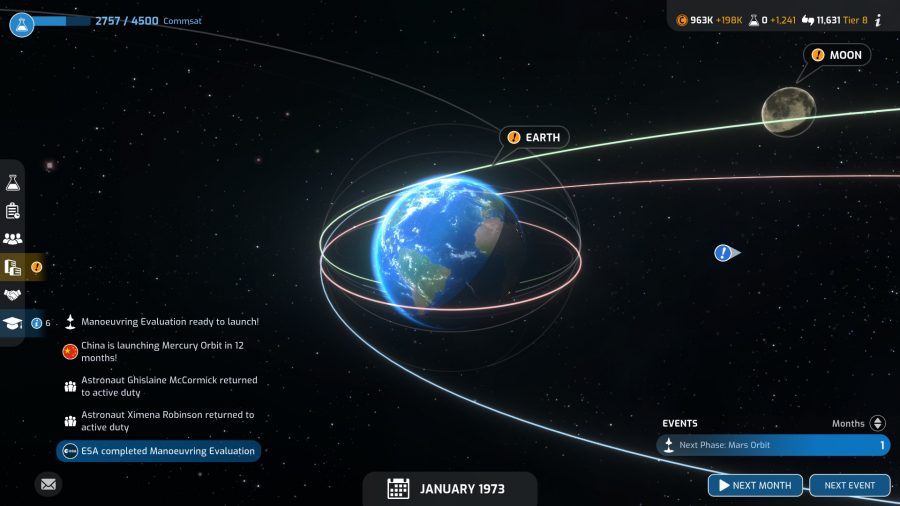 When embarking on a mission, you must first build the payload. Different payloads come with different options, but the real meat comes from the step after that: designing the rocket itself. You must choose a booster system, and an upper stage. The upper stage must be able to carry the mass of the payload, but also have the range to take it where you want to go. So if you’re just going to orbit, then a smaller rocket will be fine. Mars, Jupiter, and beyond? You’ll need a bigger boat. The booster system simply has to provide enough lift to get both the upper stage and the payload into space. Assuming you’ve researched the right tech for the right parts, this is just a matter of time and money. The more you use a particular part, the better its performance will become.

Mars Horizon respects your time, has some smart design choices, and is fun

Missions themselves involve a series of mini-games, and can come in several phases for the longer projects that spread out over months and years. There are different resources that can appear across the various mission types. The basic ones are power, communication, science, and navigation. If it is a crewed mission, you can use crew as a resource. Specific scenarios may also involve things like drift, heat, and thrust.

Across a set number of turns, you must generate the right amount of the required resource in order to complete the challenge. A higher ‘stretch goal’ can net you bonus rewards. This is Mars Horizon’s attempt to add in an approximation of a kinetic challenge, and to remind you that you’re on a significant journey through space. But this aspect of its simulation is where it most obviously suffers next to KSP, in which you literally have to try and fly your rocket into space, literally calculate the orbital transfers, and literally stop your rocket from crashing full-pelt onto the moon’s surface.

That’s all taken care of for you in Mars Horizon, and fair enough, accessibility is a choice, but there does need to be something more than just a rather rote procession through menu screens. 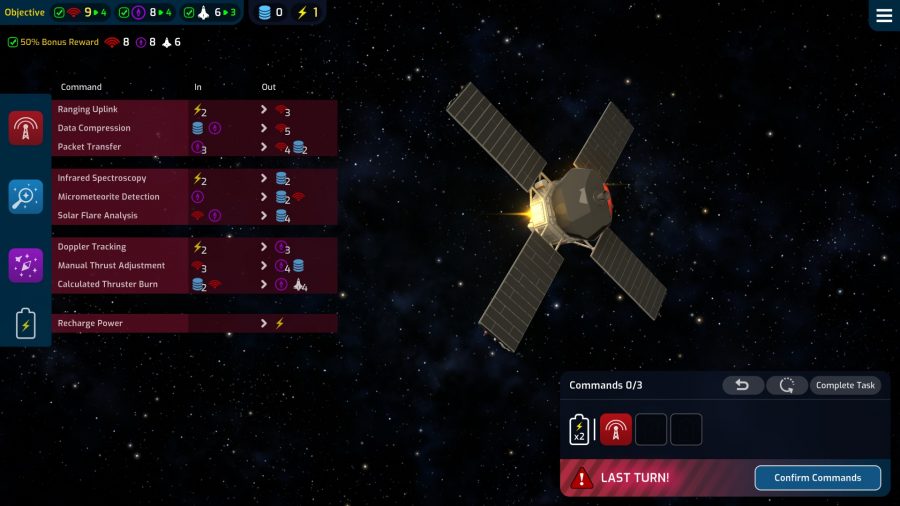 The mini-games are fun for what they are, where they give you a range of options that each have different costs and produce different results. You won’t always need every resource, but sometimes you’ll generate it anyway, and these can still be used to generate other things you *do* need. It’s all about trade-offs and combos, with the challenges that involve heat or thrust throwing in that extra wrinkle.

There are also little video vignettes that try to add a bit of personality to proceedings. The take-off shots are quite fun, and you get special effects for when you get a critical success or failure (especially when crew are present) during the mini-games. Major milestone missions will involve a series of videos at every stage. My moon landing, mentioned at the beginning, is one such attempt to capture the wonder and spectacle of what you’re doing.

Something must be said for the visuals in general – Mars Horizon is a pretty game, and a lot of love and attention has been lavished on giving you as much to look at as possible. A smart choice, given Kerbal Space Program renders and models an entire living solar system in real time. As you and the rival agencies start exploring more of the solar system, you see little icons zipping all over the place, and navigating between planets is pretty cool. The rocket design screen gives as much over to your creation as is possible, and the mini-game screens show your payload front and centre with a starry (or orbital) backdrop. Even the base screen, though I rarely spend time there, is bright and vibrant. 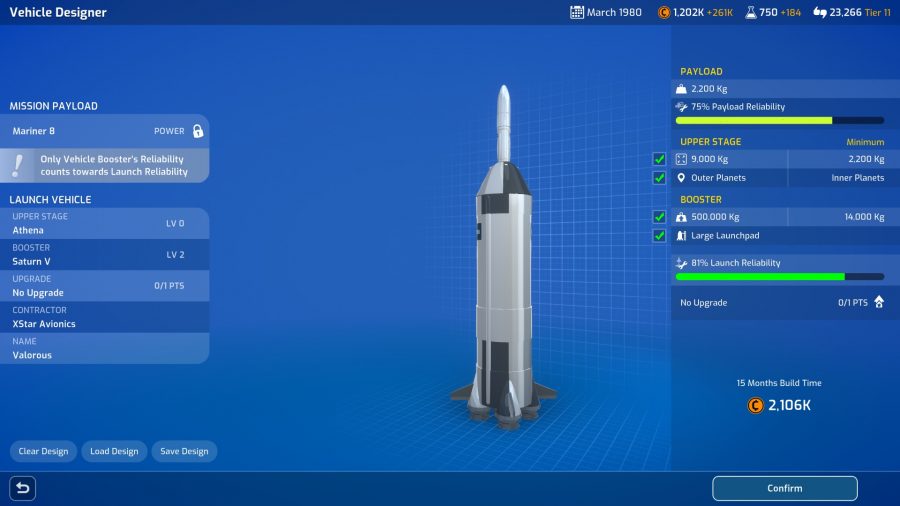 Another strength of Mars Horizon is that there isn’t really a fail state – you will always earn money and generate science. At worst, your progress will feel slow as you click through the turns creeping towards your next actionable project, but it means that you’ll always be doing something. Failing to get to the key milestones first doesn’t really come with any penalties, you’ll just get fewer rewards. But the real ‘money makers’ – across science, support and, eventually, money – are the request missions anyway, and you can easily just focus on those instead of directly competing with the other AI agencies.

The only milestone that matters is the endgame goal of landing a crewed mission on Mars. Whoever does that first ‘wins’, and your progress through the mid-game milestones doesn’t wholly affect your ability to achieve this final goal. One route to victory is actually to be on such good terms with a rival agency that they invite you to do it with them as a ‘joint’ mission. One of the best things that can actually be said about Mars Horizon is that it respects your time, which is a rare quality in a game. In Kerbal Space Program, you can spend quite a while trying to build a rocket, only for it to fail at launch and the game isn’t really that good at telling you why. You can also run out of money, or get stuck on the science tree which locks you out of some much-needed parts. 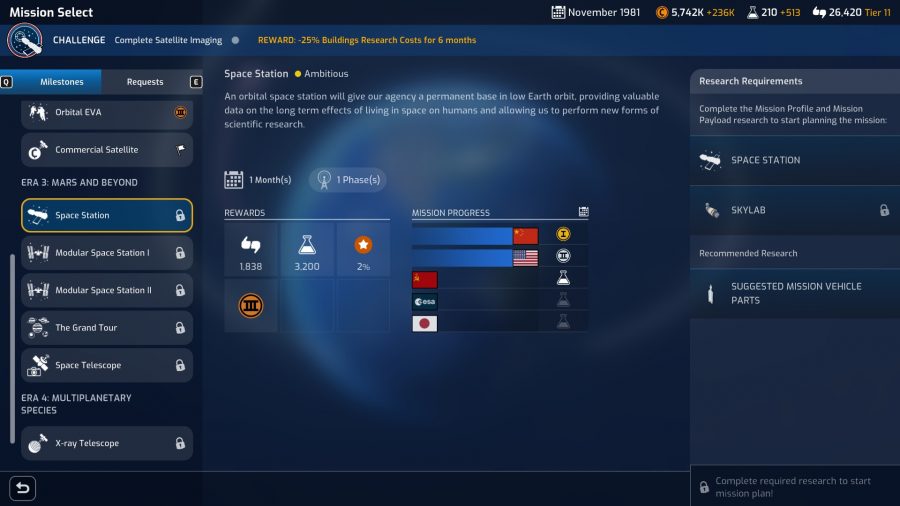 Mars Horizon is a vision of space exploration through turns and menus. In making itself more accessible and the choices more meaningful than its most obvious alternative, there has been a sacrifice made in terms of personality and wonder. Kerbal Space Program is a sandbox in which you get an impressive set of tools to play around in an amazingly detailed physics simulation, but it can also be quite impenetrable. Yet that’s exactly the reason that, when you finally do figure out delta v and get your rocket on the way to the moon, it never fails to take your breath away.

Mars Horizon probably isn’t capable of capturing your heart in the same way, but it does allow you to play a game about going into space that won’t require you to have a science degree. It respects your time, has some smart design choices, and it’s fun. It’s also pretty and charming to boot, and I’m glad it’s here to inspire new generations of space explorers.

A fun management game about running a space program and shooting for the stars that sacrifices some of the visual wonder of space travel in order to remain accessible.