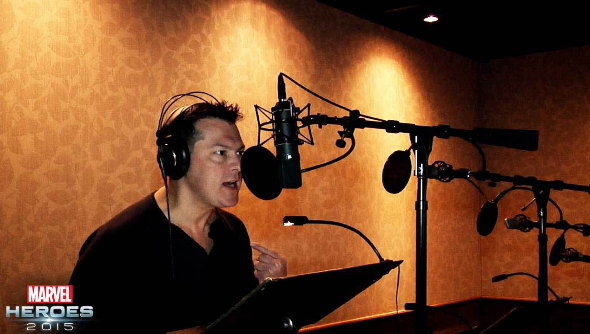 David Hayter is one of video gaming’s treasures. Best known as the voice behind Metal Gear Solid’s Snake, he’s also familiar to the ears of anyone who’s played Eternal Darkness, Star Wars: The Old Republic, and République. Lately he’s been joining Marvel’s cast of ever-growing actors to play a superhero, voicing The Winter Soldier in MMO Marvel Heroes.

“When I saw this audition come through from Marvel, I couldn’t resist,” said Hayter. 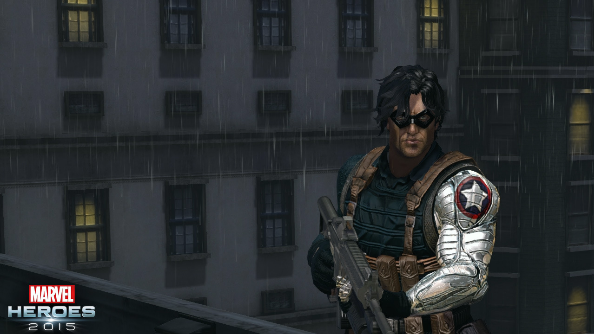 Acting for video games is a very different world to that of film. “Sometimes your lines are recorded out of order, so you have to sort of feel your way through to the meaning of the dialogue,” explained Hayter. Sometimes actors get to work together, especially if it’s key that their relationship displays chemistry (think Booker and Elizabeth from BioShock Infinite). The most classic approach though is to record lines alone. This could be perceived as restrictive, but Hayter had no problems with it for Marvel Heroes. “Winter Soldier was fairly straightforward, but exceptional fun,” he said.

Over the last decade of games, the stretch for a more cinematic experience has seen heavy emphasis placed on acting. Hayter is arguably the first voice actor to offer up an iconic, movie-like performance with Solid Snake, but recently the likes of Troy Baker and Nolan North have been seen as the equivalents of Hollywood superstars for games. “I think there are games out there that have really proved that [emphasis on strong acting talent] with some remarkable production values,” said Hayter. “Primarily though I think it comes down to having characters you can believe in as a player. Characters are an important pillar of storytelling.”

It’s a strong point. Without Troy Baker’s performance as Booker in BioShock, would the relationship between him and Elizabeth have seemed as honest? Imagine the game with Resident Evil-grade vocals, and the impact of the story practically vanishes.

Alongside voice acting, Hayter is also a Hollywood script writer, having penned the screenplays for X-Men, X-Men 2, and Watchmen. Despite being strongly tied to the games industry though, he’s never attempted to do a game-to-film adaptation. “Some games just don’t need to be movies, and I’ve turned down a few that didn’t,” he said. Why? “In a film, you have only two hours to immerse an audience – of gamers and non-gamers alike — into a world which a videogame player make take months to explore. I think this is the problem with trying to adapt something to film, from an already incredibly rich, visual medium,” he explained.

Hayter does believe there’s hope for a good video game movie, though. “I think there are a number of filmmakers out there now who do understand video games now because, like me, they’ve been playing them all their lives. But you need a whole team of filmmakers, producers and studio who all understand the title they’re making, and that can still be rare.”

Fancy a chance at picking up The Winter Soldier or another Marvel hero to play as in Marvel Heroes? We’ve got 5,000 hero keys to give away!