Capcom accidentally exposed their entire business plan for Marvel vs. Capcom Infinite to all of YouTube last night. It’s a pretty colossal blunder, especially since it earned a cool rebuke from the boss of the world’s biggest fighting game tournament, whose involement Capcom had hoped to secure.

With Ghost Rider joining the roster, here are all the characters confirmed in Marvel vs. Capcom: Infinite.

A five-minute video, meant for internal briefings, was accidentally set to public by a Capcom executive on his personal YouTube account. It was quickly pulled, but not quick enough for no-one to see; there’s a NeoGAF thread, Eurogamer have grabbed some screens, and Capcom have been playing whack-a-mole with mirror videos ever since.

Anyway, since the cat’s out of the bag, here’s what we know. Capcom plan to include MvCI in the Capcom Pro Tour, as they did with Street Fighter V, and will invite the top 14 players on the leaderboards to go to the Capcom Cup itself. The next phase is to cultivate a year-round esports league for Marvel, starting in 2018, using the Capcom Pro Tour structure, and with a $600,000 prize pool.

None of this is too surprising, but the meat of the leak comes when it discusses monetisation. There’s a profit and loss forecast and a distribution breakdown, showing exactly how much Capcom think it’ll all make, and who will get it. 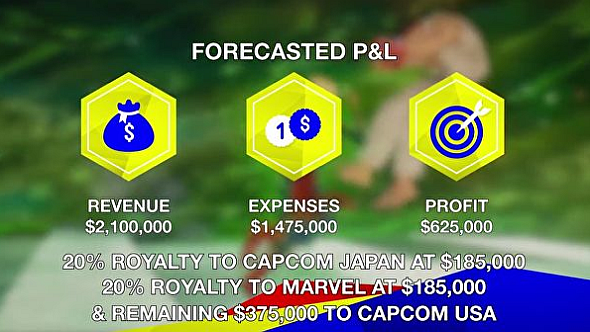 The video also mentions how Evo, the world’s biggest fighting game tournament, will factor into the plan. That came as a surprise to Evo boss Joey Cuellar, who doesn’t seem pleased:

This leaked video does not represent Evo’s views and we were not consulted beforehand about the video. Footage was used without our consent.

After the video went public, the unfortunate man responsible for its leaking was quick to emphasise that its plans are not final. That’s John Diamonon, Capcom’s senior director of licensing and esports, who said it only describes a proposal:

The Capcom esports video that was mistakenly uploaded to my YouTube channel was a proposal and the information included was not final.