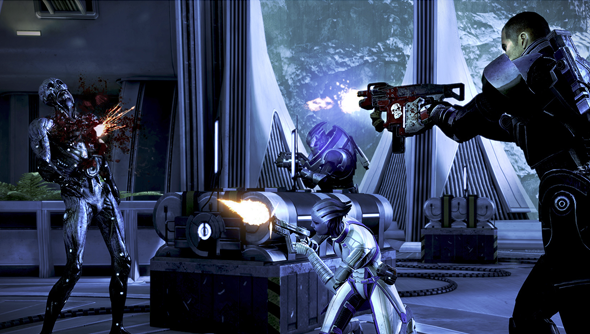 “Bear in mind this is a “wish list” at this point,” Aaryn Flynn, general manager at Bioware Edmonton and Montreal said. This was after asking Neogaf readers to tell him what they’d like to see in a Mass Effect re-release.

He suggested higher resolution, all the DLC, and, more excitingly, a seamless experience where each game ran into the next.

Flynn said he’d like to see “1080p, 60 fps, High res textures (especially on ME1), Some shader improvements commensurate with newer GPUs, all the DLC, [and a] ‘seamless experience’ – the adventures flow into each other without having to go back to save import, menu screens, etc.”

That last point would make Mass Effect’s re-release unique. Other re-released games have remained unchanged besides their improvements, texture upgrades and so on. The games themselves have remained separate entities.

Replies have seen people asking for the combat mechanics of the later games transplanted into the first Mass Effect. Mass Effect 2 and 3 streamlined combat, added a cover system, and generally made the action significantly more entertaining. However, Flynn’s already shot down the chance of that happening, saying “‘ME3 combat mechanics in ME1’ comes up relatively often, but it’s not on my radar (again, speaking personally). First it would be a helluva lot of work. Second, I hate the idea of us being accused of ‘retconning’ ME1. Third (and I bet everyone on NeoGAF knows this), there are those who prefer ME1… So given that all that, it doesn’t feel like the right thing to do.”

Others have asked for controller support on the PC and for specific graphical improvements, like an improved set of hair shaders.

One thing that was mentioned that would be ideal is the organic integration of DLC – so, the DLC would appear at an appropriate time within the game, as though it were always a part of it.

Flynn suggested this wish list without any confirmation of a Mass Effect trilogy re-release but surely he knows this would be cruelly stirring the hornet’s nest of fans if they had nothing like this planned for the series.