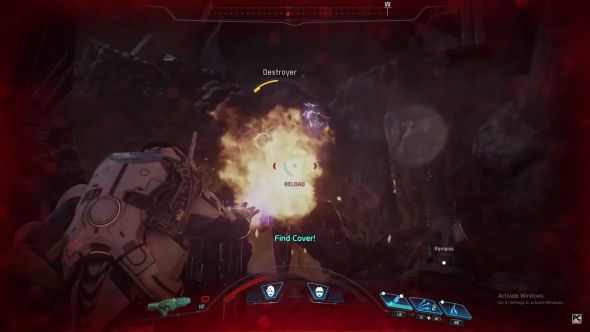 We’ve got some new details on Mass Effect: Andromeda’s crafting and combat systems, thanks to lead designer Ian Frazier’s twitter account. It seems Andromeda’s hostile aliens, the Kett, use plasma technology; there are ways to get more mileage from your ammo mods and power combos; and you can combine the above to make a build substantially based on fire damage.

For more on gaming’s latest space opera, here’s everything we know about Mass Effect: Andromeda.

Frazier says he’s playing a ‘pyromaniac’ Ryder– probably not an official label for a build or anything, but a Ryder with lots of fire-based powers and incendiary rounds. This leads to a back-and-forth with the inquisitive @BioFanOfficial, and reveals a bit about crafting and ammo before Frazier malfunctions, declaring his “free information limit has been reached”.

Apparently the gun you’re using will affect the mileage you get from ammo modifications, and you can use the crafting system to build one to maximise this. Frazier also says there’s a way “to maximise your combos“, and that he’s achieving both by “using some kett tech I found”.

If you didn’t make much use of power combos in previous Mass Effect games, you’ll find that, with your powers now on individual cooldowns, you’ll be able to use them much more freely.

@Bergen3Jacob @GambleMike Tech combos are indeed more accessible due to individual cooldowns. I don't recommend playing /w no gun, though.

Even Frazier’s newly-crafted (and named) gun causes burns, but by making use of plasma, not fire. Fans will remember the Geth used plasma weapons in the first trilogy, but for the most part this is a departure from Mily Way technology. Frazier reveals that’s because it’s based on new tech from the Andromeda galaxy’s bad guys, the Kett:

@tyler_norstrom Most Milky Way weapons do, yes. I built this thing with kett technology I've been researching. 🙂

Since you’re here, one other thing: Frazier also says “after nearly four years, my wall of digital post-its is nearly empty for the first time… I think we might actually be close to done.” How’s that for a signoff?

Mass Effect: Andromeda is due on March 21 in the USA and March 23 in Europe.