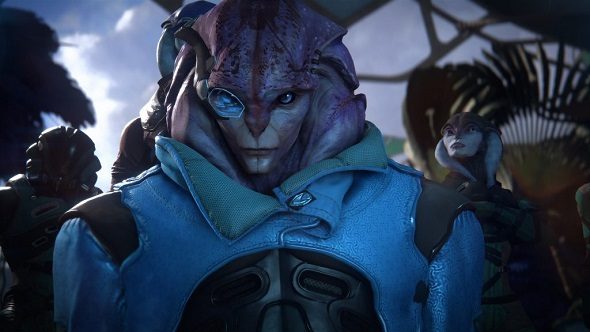 Bioware just released a new patch for Mass Effect: Andromeda to make the new galaxy a little more gay. Players had previously pointed out how gay male Ryders didn’t have nearly as many options as other sexual orientations. With Jaal now being open to male and female partners, all is well in the universe.

They say love is a battlefield, so why not check out our list of the best war games.

Before this patch, Scott Ryder had no male romance options among squadmates. Jaal’s race is gender-fluid, so it makes sense for his character. Here’s what Bioware had to say:

“We understand that a character’s orientation is an important part of what makes them feel real. The relationships with your crew are some of the most loved and cherished parts of our games, so we wanted to make sure we got it right. We consulted with members of the LGBTQ community, both externally and within our own studios. After carefully considering all feedback, we decided this was an important change to make, and one that made sense for Jaal, Scott, and the angara.”

Bioware say there’s been new work from the writers, editors, and animators to make the change be as memorable as possible.

Elsewhere, Hainly Abrams – an openly trans character you meet in a sidequest – has been reworked so she doesn’t deadname herself as soon as you meet her, making your relationship with her more natural.

One other big change is to character customisation, with new heads added, as well as more skin tones. All hairstyles are available for men and women now, too, and there’s a new bald style for you beans out there. You can also change your appearance mid-game from on board the Tempest now.