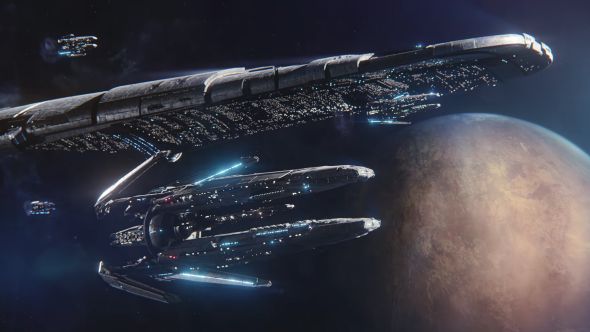 We’ve heard about the planets we’ll visit and we’ve seen the interior of the Tempest, but fans of Mass Effect: Andromeda haven’t really seen inside of the giant Nexus colony ship. In this new footage from IGN, future Pathfinders finally get to have a look round the Nexus, ahead of March 21.

Prepare yourself for the intergalatic trip, with our extensive Mass Effect: Andromeda guide.

A similar size to the Citadel from the original Mass Effect trilogy, the Nexus is the mobile base for the Andromeda Initiative’s journey through this new galaxy. As Ryder and this crew of the Tempest develop the seven golden worlds dotted around the Helius Cluster, the Nexus will grow in size and more colonists will emerge from cryosleep. By the end of your adventure, the Nexus should be a thriving hub of activity, as inhabitants from different Habitats travel to and from this huge colony ship.

The Nexus is the home of the Pathfinder Initiative’s research lab, where you can upgrade weapons and armour for the missions ahead. Players can improve their equipment based on new technology found in the Helius Cluster or based on old world tech from the Milky Way. You can also tune up the Nomad from the lab, so check back in regularly to develop any new tech you found in the field.

As you level up the Nexus, you can unthaw more colonists from cryosleep to help improve the process of colonizing the Helius Cluster. These upgrades are organised by military, commerce and science, so choose wisely when waking certain people up from their 600 year long nap.

It’s not all work on the Nexus, as it also contains a special cultural exchange and a new bar called Vortex. The cultural exchange can give players additional information on the different species and peoples present on the Nexus, while Vortex gives Ryder and pals a place to chill out after a tough mission. There are randomised events like karaoke and even slam poetry competitions at Vortex, so stop by if you have a moment free between excursions.